The coronavirus, or COVID-19, is a global pandemic sweeping across the entire world. As such, a growing number of notable public figures have begun testing positive for the virus. This includes celebrities, politicians and athletes, many of whom have publicly disclosed their positive tests in an effort to raise awareness and promote healthy preventive practices.

Not all celebrities have been so mindful during the crisis. This morning it was reported that Lost and Marvel star Evangeline Lilly was refusing to self-quarantine over objections that it represented a loss of personal “freedom,” in her words. With respect to those who share these views, public health guidelines say this is a wrongheaded move, one that puts others at risk of contracting COVID-19 and spreading it to vulnerable demographics.

Below is a running list of all the notable names who have revealed that they have contracted the coronavirus and are vocally taking the recommended steps to self-quarantine or self-isolate in the wake of the pandemic.

“The test came back positive,” it said. “She is feeling well, is taking all the recommended precautions and her symptoms remain mild,” the statement said, adding that the prime minister himself “is in good health with no symptoms.”

As a precautionary measure, Grégoire Trudeau and her three children will self-isolate for two weeks.

In response to the growing pandemic, the Royal Family has shuttered Kensington Palace and Windsor Castle to the public while Buckingham Palace has canceled several events, most notably Princess Beatrice’s wedding reception. Though no one within the royal family has publicly revealed a positive test, Prince William and Kate have been homeschooling their children amid outbreak concerns. Queen Elizabeth decamped to her Windsor Castle home early this year as well.

In an Instagram post last Friday, Miami mayor Francis Suarez became the first U.S. elected official to announce that he had the coronavirus. “I feel completely healthy and strong,” he said in the video, but stressed that he will remain in self-isolation.

My message in light of the news that I have tested positive for COVID-19.

Suarez revealed in later video updates that he self-quarantined after coming in contact with an adviser to Brazilian President Jair Bolsonaro, who later tested positive. On Friday, Bolsonaro said he tested negative for the coronavirus.

Arguably the most famous case of coronavirus in Hollywood is Tom Hanks and Rita Wilson. On March 11, Hanks revealed that the couple had contracted the virus while filming in Australia. Thankfully, they’ve posted positive updates on their status since and remain in self-isolation with stable symptoms. Hanks has repeatedly noted in his social media posts that beating the coronavirus will require a massive national joint effort of responsibility.

On Monday, Idris Elba (The Wire, Luther) posted a social media video announcing that he had tested positive for the coronavirus. “Listen, I’m doing OK,” he said in the video. “I didn’t have any symptoms.” In his announcement, Elba stresses that people should “Stay home” and be “pragmatic” in these trying times. The Hollywood star most recently appeared in Universal’s Cats.

This morning I tested positive for Covid 19. I feel ok, I have no symptoms so far but have been isolated since I found out about my possible exposure to the virus. Stay home people and be pragmatic. I will keep you updated on how I’m doing 👊🏾👊🏾 No panic. pic.twitter.com/Lg7HVMZglZ

Also on Monday, Game of Thrones co-star Kristofer Hivju revealed that he too had tested positive for COVID-19. The actor took to Instagram to assure fans that he and his family “Are in good health” and that he only has “mild symptoms of a cold.” He remains in self-isolation.

Luke Skywalker himself, Mark Hamill, is also promoting responsible behavior during this outbreak in his typical wry and humorous fashion.

Luke 'Get Off My Island' Skywalker-
ORIGINAL SOCIAL-DISTANCING ENTHUSIAST pic.twitter.com/DJpY2GT4ve

In an effort to lift spirits, Gal Gadot (Wonder Woman) recruited a slew of celebrities such as Kristen Wiig, Mark Ruffalo, Will Ferrell and other A-listers for a cover of John Lennon’s “Imagine.” The video, said to be recorded during her own quarantine, was reportedly inspired by viral videos from Italy depicting neighbors in quarantine singing together.

Former Quantum of Solace co-star Olga Kurylenko announced via Instagram on Sunday that she had unfortunately tested positive. Her symptoms appeared more extreme as she said that she had been “ill for almost a week” with “fever and fatigue.” She was unsure where she might have contracted the pathogen.

Frozen 2 actress Rachel Matthews has also “been in quarantine for the last week,” according to her Instagram. “Unsure of what the next step is (been getting mixed info so will keep you posted) but obviously will remain in quarantine until told to do otherwise,” the actress wrote Monday. “Let’s please be mindful of our decisions — now is the time to be smart and responsible. Let’s take care of one another!!”

Singer-songwriter Charlotte Lawrence, 19, also took to Instagram to announce her positive test. “I am going to be completely fine,” she wrote on Tuesday. “But many who get it won’t be if too many people get sick too quickly. So this is not me asking for prayers, for love, for sweet messages. This is me pleading for you all to protect those less able to survive this virus.”

The first NBA players to officially test positive for coronavirus were Utah Jazz stars Rudy Gobert and Donovan Mitchell. Their diagnosis came last week and was soon followed by the NBA’s announcement that it was suspending the season indefinitely. Following his diagnosis, Gobert apologized for his careless comments from an earlier press conference in which he claimed the public was overreacting to the virus.

“I was careless and make no excuse,” Gobert wrote on Instagram. “I hope my story serves as a warning and causes everyone to take this seriously. I will do whatever I can to support using my experience as way to educate others and prevent the spread of this virus.”

On Tuesday, the Brooklyn Nets announced that four of their players had tested positive for the coronavirus, though they chose not to publicly name them. Soon after, former MVP and two-time NBA champion Kevin Durant revealed that he was one of Nets players who had been diagnosed.

Kevin Durant tested positive for coronavirus, Durant tells @TheAthleticNBA @Stadium. Durant says he is feeling fine: "Everyone be careful, take care of yourself and quarantine. We're going to get through this."

On Friday, 19-year-old Chelsea Football Club star Callum Hudson-Odoi added his name to the growing list of pro athletes that have tested positive for COVID-19. “Thank you for all your good wishes, as I said in the video I’m feeling good and hope to see you all soon!!” he said on Instagram. 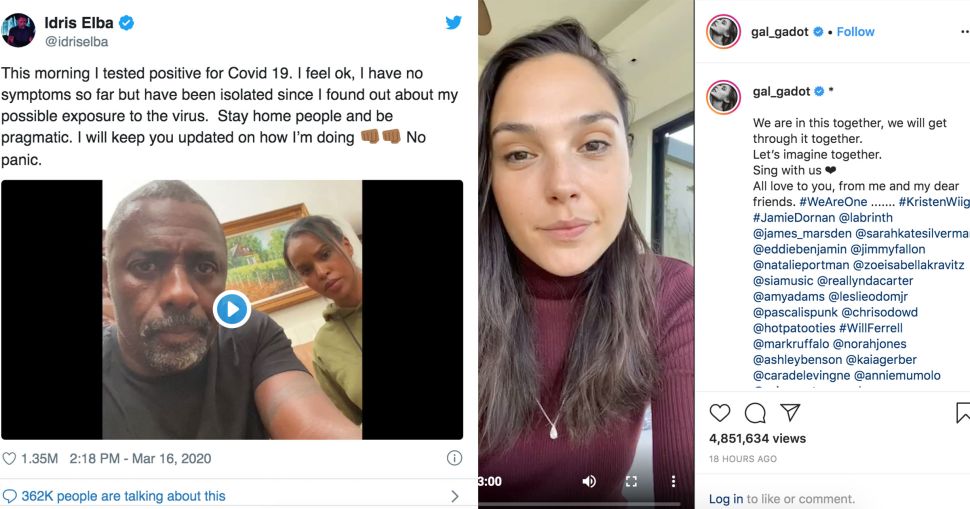