Blessed by geography, Covid-19 has yet to hit in full force in Tennessee’s Shelby County, the state’s largest by land size and population, at least according to numbers seen by local public health authorities.

Only about a dozen people were tested on the drive-thru’s first day of operation, local news station WMC Action News-5 reported. Clearly there were a lot more people who wanted to get tested but didn’t. A traveling salesman managed to snag a test on site, only because the person who had made an appointment didn’t show up. Several worried citizens who didn’t make appointments were turned away.

SEE ALSO: 4 Fast Covid-19 Test Kits That Could Turn the Tide of the Pandemic

Andrenette Flemming, the doctor running tests at the drive-thru, told WMC Action News-5 that she only had 30 test kits on hand and had no idea when she would receive more.

Tennessee Governor Bill Lee has warned residents that the state’s case count “will continue to increase” as soon as more tests are conducted. But no one knows when that will happen.

Fast and free drive-through testing is a technique perfected in South Korea, one of the first epicenters of Covid-19 outside of China. Studies have shown that this method is safer than testing in a traditional clinical setting to both patients and health care workers.

At press time, there are more than 10,000 confirmed Covid-19 cases in the U.S. But actual number could be much higher given the scarcity of test material and high barriers to get tested in the country right now.

On Tuesday, The Los Angeles Times reported that a Florida woman who’d recently returned from an overseas trip died and was tested positive for Covid-19 in a post-mortem exam. Her husband, who had given her CPR before her death, tried to get himself tested but couldn’t, because he didn’t have any symptoms.

The few drive-thru sites in the U.S. are operating under similarly limited capacity as seen in Tennessee.

In Evansville, Ind., for example, drive-thru tests at the Deaconess Health System are only available to those who have symptoms, “known exposure” to someone already tested positive and a doctor’s note. (Indiana’s public health system said it had tested only 193 people across the state as of Wednesday—with 39 positive results.)

According to the Centers for Disease Control and Prevention, there are now 89 qualified labs across the country that process coronavirus tests. The number of tests each lab can handle varies greatly. One of the best, the Stanford Clinical Virology Lab, has said that it aims to be able to process 1,000 tests a day by next week. 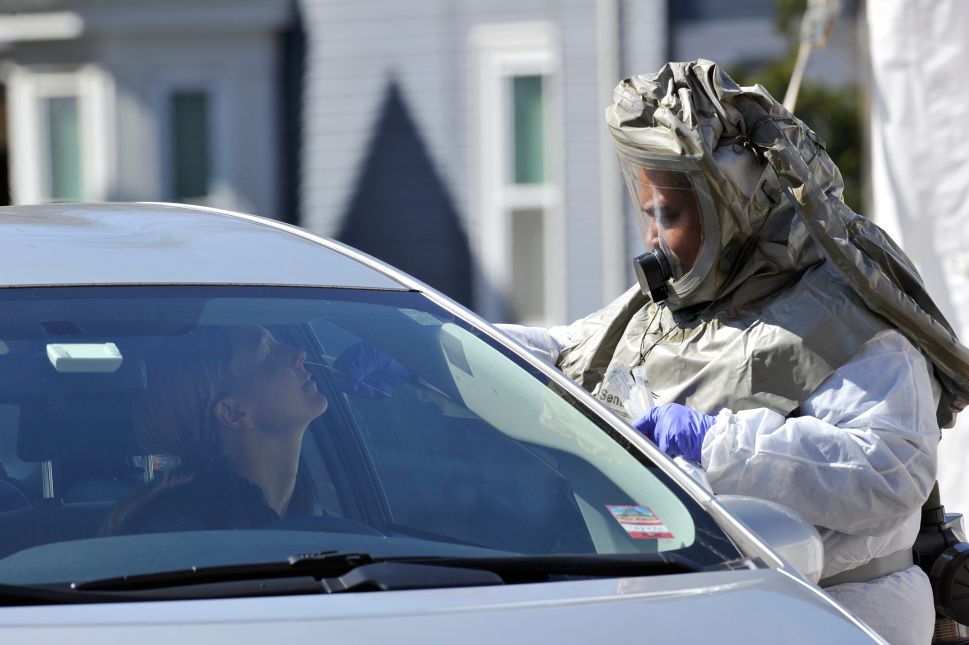