Amid the total panic being inflicted on the entire world by the coronavirus, there’s something almost comforting about a legal dispute between an up-and-coming artist and his former gallery: despite the portents of doom seeping in from every corner, contentious conflicts regarding contract breaches and revenue are as alive and well as ever. Back in February, Robert Blumenthal Gallery filed a $1.45 million lawsuit against Derek Fordjour, alleging that the artist had failed to deliver seven promised artworks to the gallery based upon an agreement they’d entered into six years ago. As of this week, Fordjour has filed a motion in New York Supreme Court attempting to get the lawsuit thrown out. But who is Fordjour, and how did his work come to attract so much heat?

Born in 1974 in Memphis, Tennessee, Fordjour is a multidisciplinary artist whose work deals with American culture, community and identity. Fordjour started attracting widespread attention from the art world in approximately 2018, when his solo booth show with Josh Lilley gallery made a big splash at Art Basel Miami Beach. Fordjour’s 2018 also included an outdoor installation at the Whitney Museum of American Art, as well as a tribute to Harlem street parades that was displayed at the Lenox Avenue subway station. Fordjour’s style, which is brilliantly multicolored and often features crowds or teams, has also attracted big prices at auction. In 2019, Fordjour’s painting Agency and Regulation (study), 2016, sold at a Phillips auction for $137,500, more than double than what it was estimated to sell for. Plus, mega-celebrities Jay-Z and Beyoncé are confirmed collectors: during May 2019’s Frieze New York fair, the married couple bought Fordjour’s work Top-Ten ALLSTARS (2019) for $200,000.

SEE ALSO: One Week After Being Sued, Online Auction House Paddle8 Has Filed for Bankruptcy

“Success often breeds resentment, and there is usually someone who believes they have received less credit than they deserve. In this case, that someone is Robert Blumenthal,” Fordjour’s Supreme Court motion reads. “But he does not want the limited credit as one of Fordjour’s early art dealers and fiduciaries…Instead, he wants to rob Fordjour of nearly two dozen works of art—claiming that he is the sole owner of those works, which he now wants to sell for his own personal profit.”

However this legal dispute shakes out, it’s clear that Fordjour’s star power will continue to buoy him through the often-lethal art world, and that’s a quality that money can’t buy. 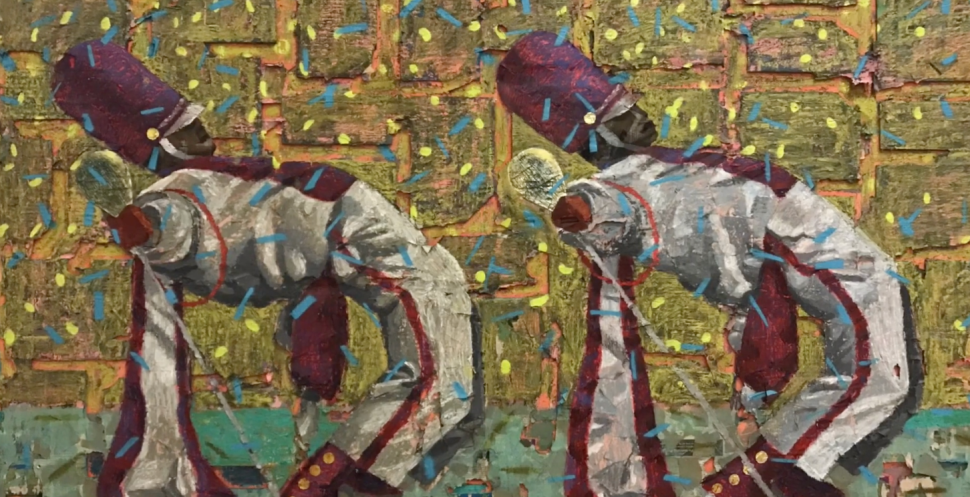