Keeping Watch is a new, semi-regular endorsement of underseen TV and movies.

Reports of the death of the zombie genre are greatly exaggerated. While arguments about the lack of originality within the genre are commonplace, plenty of projects that prove there is still life in the genre and one of the best hails from South Korea. Ahead of its Season 2 premiere this month, let’s consider Netflix’s Kingdom, a show that mixes the political intrigue of Game of Thrones and the class struggles of Parasite with a zombie threat, and it’s as timely as it’s ever been with deadly viruses dominating the news.

Directed by Kim Seong-hun and written by Kim Eun-hee, Kingdom takes place in medieval Korea during the Joseon dynasty, where news comes out that the king has fallen ill with what is officially being described as smallpox. The king’s condition leads to the death of a doctor’s assistant, who is fed to the provincials of the assistant’s village because that’s a preferable meal than starving to death. Of course, eating tainted meat, particularly zombie-tainted meat, transforms the villagers into flesh-eating zombies and starts spreading a deadly virus across the land.

From there, the show starts exploring a side of the zombie outbreak not commonly seen in movies—a panoramic view of how corruption and official incompetence leads to the collapse of society. Where most movies or shows focus on how individuals experience the beginnings of a zombie outbreak and how civilization starts to crumble, Kingdom focuses on the establishments and institutions that allow the powerful to trample the powerless in times of crisis. Our main character is the King’s son, Crown Prince Lee Chang (Ju Ji-hoon) who has to flee for the countryside after he’s framed as a traitor. He serves as our audience surrogate, and it’s through him that we see how the virus starts spreading, and how the noblemen and officials fail miserably to contain or stop the outbreak.

In some ways, Kingdom has more in common with this year’s Best Picture winner, Parasite, than it does with American zombie epic The Walking Dead. Class struggle and the ways those with power abandon their subjects when it stops being beneficial to them is a central theme in the show. While multiple scenes show the wealthy feasting luxuriously on fancy meats, the poor have to drink from the same place that serves as their bathroom. Early in the six-episode first season, a physician suggests that the officials at a fort burn the slumbering zombies instead of burying them, because they’ll simply dig themselves out come nightfall. Immediately, members from higher social classes object, and the man in charge offers a compromise: burning only the peasant’s corpses but burying those of nobles. Zombies may be a more visceral source of horror, but Kingdom lever loses sight of the true horror that lies in class inequities.

At the same time, Kingdom is very interested in seeing how the existing structures deal with the external threat of a zombie outbreak while still vying for power, which will be familiar to fans of Game of Thrones. While we see the Crown Prince actually deal with the zombies, the show cuts to follow Lord Cho (Ryu Seung-ryong) of the Haewon Cho Clan and the Queen Regent as they plot to take over the throne as soon as she can give birth to a true heir. As they capitalize on the zombie chaos, a third party that seems to have its own agenda that threatens what little stability there is in the kingdom.

But what about the zombies themselves? Kingdom doesn’t reinvent the wheel, but it does add new twists to the zombie mythology by introducing the quasi-vampiric nature of its flesh-eaters. Turns out, the zombies can only walk and eat at night, but remain dormant during the day. Likewise, the show takes full advantage of its low-tech setting to show a different side of the fight against the undead, with gorgeous sword-fighting choreography and inventive siege tactics to fight the zombie threat.

If you were left disappointed by the treatment of the White Walkers on the last season of Game of Thrones, and have become tired with The Walking Dead, then stop what you’re doing and experience the medieval horrors of Kingdom before the carnage resumes this month. 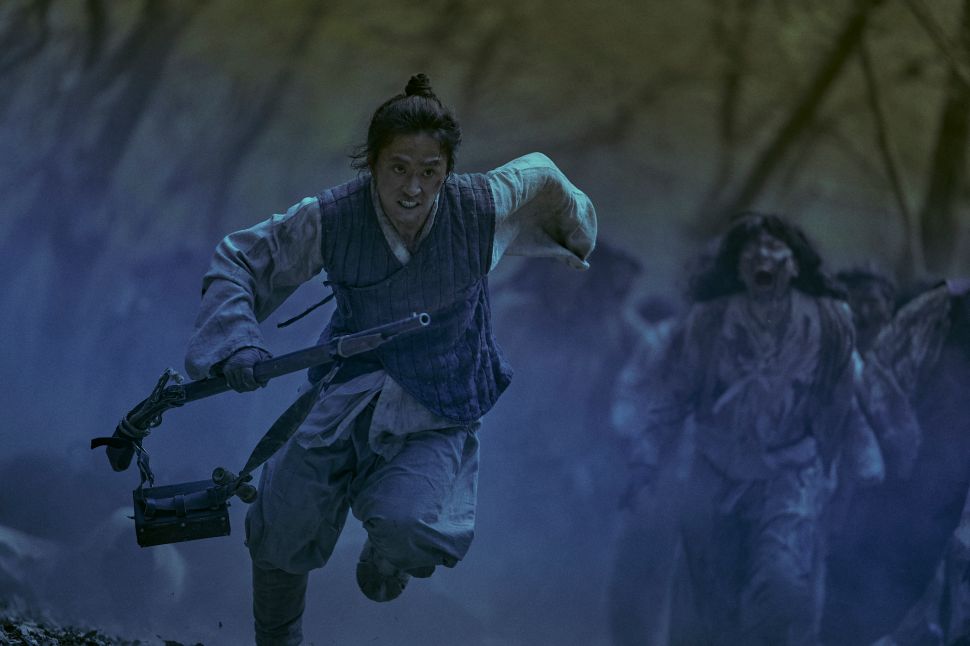