“I thought she was great,” Bennett says, “I wanted to study it more but I was on the plane. I’m glad she did good.” As for insights into its subject, the late, great Judy Garland? “The film,” she adds, “wasn’t saying anything that we didn’t know.

Fair enough. And that goes double for Bennett. Eight years ago, in her Broadway debut, she played the doomed legend in the last months of her life and earned a Tony Award nomination for her efforts in Peter Quilter’s drama with music End of the Rainbow. The play was adapted into Judy.

While both actresses elevated their respective material, the play and film are two different animals, including one indelibly cringe-y moment in the stage version when Garland, after mistakenly swallowing pills meant for a dog, scurries around a London hotel room on all fours. Camping it up canine-style in a little black dress, she arfs, sits up to beg and then cocks her leg up on the fancy furniture—and a fellow performer—as if to take a wiz.

Bennett remembers. Asked if it’s the most bizarre thing she’s ever had to do as an actress, the 58-year-old from Lancashire in northwestern England who “was sporty as a kid and originally wanted to be a stunt person” tilts her head back and gives her career a mental once-over. It has spanned four decades, includes TV and films and has won her two Oliviers, London’s coveted theater award—for the musicals She Loves Me and Hairspray—along with nominations for High Society, End of the Rainbow, Mrs. Henderson Presents and Follies. It’s a rich resume.

“Hmm, good question, the most bizarre?,” she says. “Actually, no. I did play a duck. It required duck acting. Yeah, that one.” The quacked-up vehicle was the musical Honk!, based on “The Ugly Duckling” by Hans Christian Andersen, an author whose fairy tales often have a less-than-sunny side. Ask the Little Mermaid. Actually, don’t, since she loses her tongue.

In that way, the fowl experience was good practice for working with McDonagh, the son of Irish parents and raised in London whose works tend to blend wicked mirth and unnerving menace. Consider the Oscar-winning film he wrote and directed, Three Billboards Outside Ebbing, Missouri. And New York theater audiences have grinned and grimaced to his tales of child murders (The Pillowman), a mother-daughter cage match (The Beauty Queen of Leenane), and a cat-loving terrorist (The Lieutenant of Inishmore).

“He’s dark. Brilliant, and dark,” says Bennett. Having wrapped a 2019 run of the Jerry Herman musical Mame in England, she desired something shadowy, not sugary. Hangmen fit the bill.

Set in the mid-1960s, the story unfolds in a Lancashire bar where everybody knows your name—and your business. It’s run by executioner-turned-pub owner Harry (Mark Addy) and his wife Alice (Bennett). Enter Mooney (Downton Abbey dreamboat Dan Stevens), a shaggy stranger, and soon Harry and Alice and their teenaged daughter, Shirley (Gaby French), among others, are, figuratively speaking, at the end of their ropes. Revealing more plot would be telling too much.

Like Stevens, Bennett is new to director Matthew Dunster’s production, seen previously in 2015 at the Royal Court in London and three years later Off-Broadway at the Atlantic Theater.

For Dunster, Bennett’s diverse background is a plus for a couple of reasons. “Tracie has a musical theater and dance-trained precision that this play needs,” he tells Observer. “It is so technical and she has a mastery of that. But, more importantly still, she is from the town where the play is set, she is the same class as Alice. She just knows that woman. She grew up knowing her and people like her.”

As Bennett calls upon a sense memory of her youth, she’s also relying on scents. The nose knows, after all. “I like to pick a perfume for the character I’m playing,” she says. “I have to feel it first and then I shop for the scent.”

As the pill-garbled Garland, she wore Ma Griffe by Carven. “I got it on eBay,” she says. As villainous Velma Von Tussle in Hairspray, she applied Chanel No. 5. “I figured Velma was a big fan of Marilyn Monroe,’” says Bennett, “and would have been devastated by her death.” Now, as Alice, she sports L’Aimant by Coty. “It means magnet,” she says.

At the Golden Theatre, where Hangmen officially opens on March 19, Bennett cops to being a total creature of habit—from her dressing-room flowers (peonies, please) to her must-do pre-show rituals.

“I like to get in early,” she says. “I like to feel the stage. I like to know the space. Then I check my props. It’s a routine I’ve had for years,” she says, adding that she has narrowly missed an entrance and that’s drama she can do without. “I was once delayed on the way to work by a car accident—someone else’s but it made me late. I ran in with 10 minutes to go.”

“I’m not one of those girls that just tells jokes and then they run on stage,” she adds. “Putting on makeup is almost therapeutic. I need to have a think.”

And, before she makes her entrance, for magnetism, a dab of perfume. 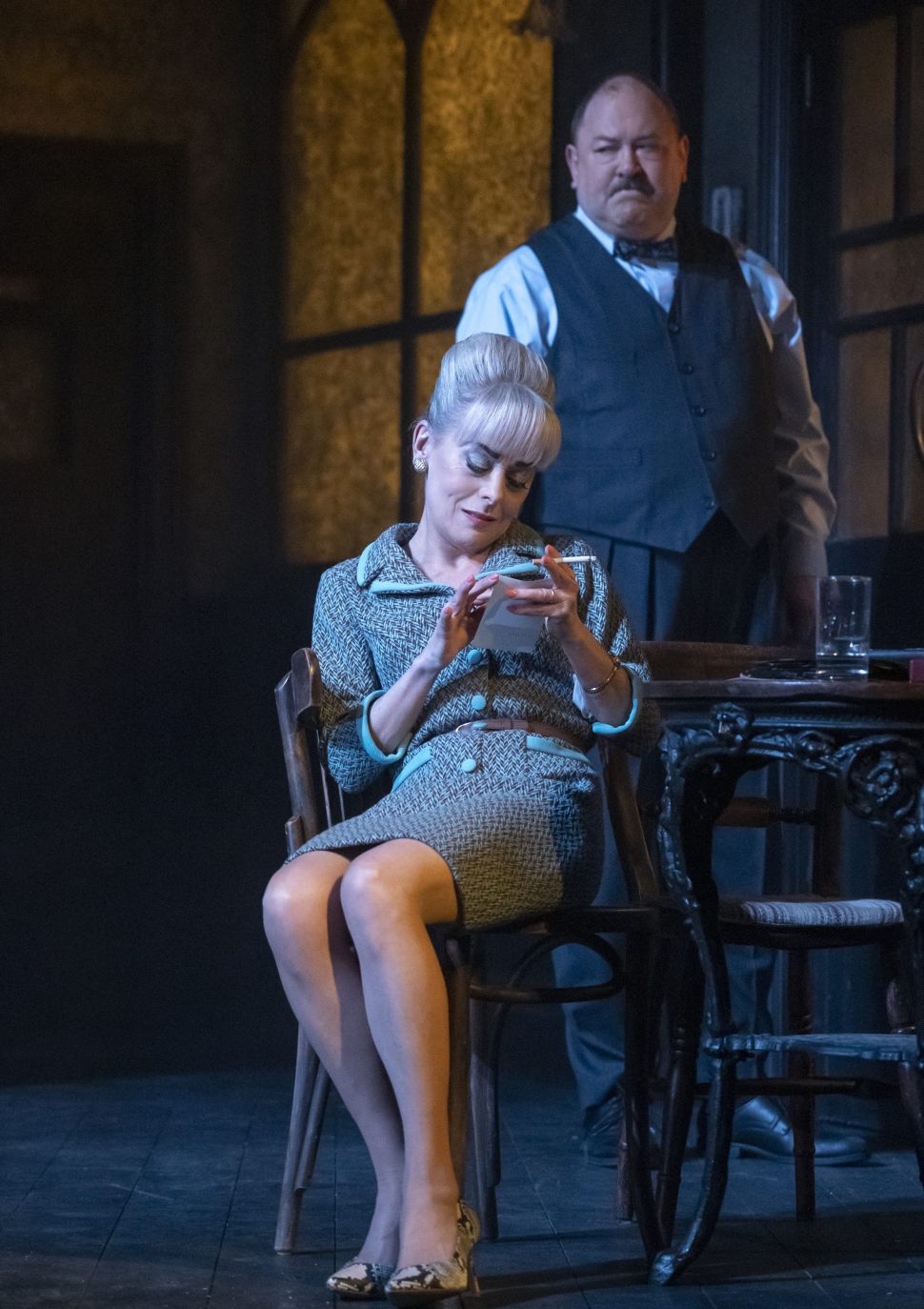