Star Trek‘s greatest villains have always been colored by shades of grey. That was true for the brutal colonizer and hopeless romantic Gul Dukat on Deep Space Nine, the godlike manipulator and struggling dad Q on The Next Generation and Voyager, and the charmingly Byronic warlord Khan Noonien Singh on The Original Series. It remains true for Star Trek: Picard‘s Narek, played by Harry Treadaway (The Crown, Penny Dreadful). Narek is one of Picard‘s most engaging creations—an icon of modern emo pathos as well as intergalactic Romulan spy who is out to find and kill sentient artificial life, aka the “Synthetics,” across the universe.

Throughout Picard‘s freshman season, Narek and his sister Narissa Rizzo (Peyton List) have proven themselves worthy adversaries to Jean-Luc Picard (Patrick Stewart) and his ad hoc crew aboard La Sirena, and they aren’t above using subterfuge and murder to achieve their goals. As Treadaway explained to Observer in a recent interview ahead of the season finale “Et in Arcadia Ego Part 2,” Narek is driven by a pursuit of the “greater good,” to the exclusion of any compassion for the artificial sentient life he intends to eradicate—whether that means his Soji Asha (Isa Briones) or any of her family.

“She represents a huge threat,” Treadaway explained of Soji, the android daughter of fan-favorite TNG character Data. To Jean-Luc Picard, she’s the sympathetic and frightened daughter of one of his best friends and beloved comrades. To Narek and Narissa, she’s prophesied to be “the Destroyer,” responsible for the destruction of not just the Romulan people but of entire worlds across the galaxy.

It’s why he seduced her before she learned of her heritage and why he attempted to kill her using the Rubik’s cube–like “Impossible Box” in the episode of the same name. “For their whole history, the Romulans thought the Synthetics would converge and destroy everything. It’s something which has been instilled in him since childhood,” Treadaway said. “And then, confusingly and troublingly, being humans or Romulans or synthetics with feelings, it hasn’t proved quite as simple as that.”

As an actor Treadaway admits it’s a challenge to inhabit a character who lives both on a razor’s edge of morality as well as hundreds of years into the future. Conversations with series creators Michael Chabon, Alex Kurtzman, Akiva Goldsman and the show’s other writers helped him fill in the gaps of the character’s backstory and relationship to the other characters.

“He’s trained in the art of subterfuge. He’s a spy. He’s someone who’s got an incredibly important mission, but is very much solo,” Treadaway explained. Narek is isolated, both by his mission but also in the context of his troubled sibling relationship with Narissa, who taunts and criticizes him, and Treadaway had to find ways to humanize that character.

“I’ve done lots of research into sociopaths and psychopaths for various roles,” Treadaway explained with a laugh, saying that Narek’s intimacy with Soji earlier in the season is in line with a willingness to do “whatever it takes” to accomplish his goals. That extends to locking her in a room with an evil alien Rubik’s cube and unleashing a deadly gas to try to kill her.

“The mission he’s got—which he thinks is to try to save all organic life forms—is so huge,” Treadaway said. “The morals and ethics go out the window when the stakes are so high. He was a man prepared to enter into an intimate relationship with someone for what he sees as the greater good for organic life in the universe. There’s nothing he wouldn’t do to gain information from her.”

Narek’s resolve is the key to his character. It’s also what makes Treadaway certain that Narek would vote for Bernie Sanders in the 2020 United States presidential election—if the character had the option.

The two-part season finale “Et in Arcadia Ego” will serve as Narek’s final test. He has followed Soji, Picard and the Sirena crew to the android planet Coppelius and escaped the Synthetics’ capture by killing one of them. His goal is the ultimate genocide of their people, and we as the audience have yet to see how that will play out when he and Soji inevitably come face to face again. 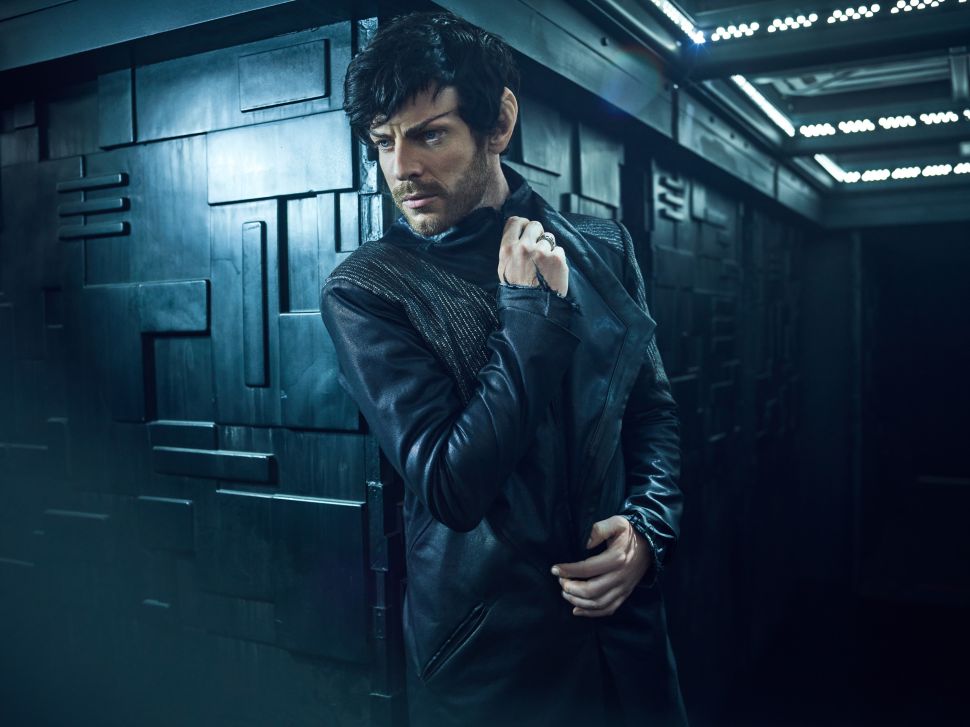