Annette Bening has always been one of the acting profession’s most profound and endearing treasures. In a variety of diverse and challenging roles, she has never, in my opinion, made a false move. But as perfect as she always is, I have never seen her burrow so deeply into a role as she does as the deserted, confused and devastated wife whose husband leaves her after three decades of marriage in Hope Gap.

SEE ALSO: ‘The Way Back’ Proves Ben Affleck Is Still an Underrated Actor

Another film about the collapse of a marriage considered by every outsider as exemplary, it’s less talky and unsteady than last year’s overwrought Marriage Story, with superior emotional power and vastly more colossal heartbreak. Written and directed by the sophisticated British playwright William Nicholson (Shadowlands), this restrained family drama showcases the multi-faceted skills of the exquisite Ms. Bening and Bill Nighy with a freshness that smoothly transitions into undeniable poignancy. On the eve of celebrating their  29th wedding anniversary, Edward (Nighy) and Grace (Bening) are joined by their adult son Jamie (played by stage sensation Josh O’Connor) from London in their comfortable coastal home overlooking the sea in Sussex, near the white cliffs of Dover. (The title refers to an atmospheric section of the land near the English Channel where Grace goes to find peace in every crisis.)

Things appear to be normal until Edward announces the shocking news that he is abandoning Grace for another woman. The marriage, he feels has gone stale, and the word “love” has lost its definition. Grace is so decimated that she counter-attacks, accusing Edward of wearing their relationship bare through indifference and resignation to dull routine. She wants the kind of reassurance he cannot find the words to express, he just wants an exit to start a new life, and their son discovers to his horror that his mother is a stranger and he is dangerously close to turning into his bland, self-centered father. The ways all three learn to cope with the inevitable changes are presented intelligently from every point of view in a complex screenplay that is never stagy or talky, but always written with tenderness and performed with naturalness and generosity.

Every shift of mood is scrupulously advanced without taking sides. Mr. Nighy is a model of disengaged ineffectualness, with Ms. Bening exploring a wide range of emotions you might expect a discarded woman in her mid-60s to feel, from bitchy anger to soul-searching remorse, sadness and strength, all with mesmerizing originality. Even her subtle British accent is without reproach. Mr. Nighy plays it closer to the vest than usual, without his customary droll humor. He walks away without a backward glance while she eventually acquires a dog for a companion, names it after the husband who left her, and volunteers to listen to the woes of others on a help line. In the end, it is clear that none of them will ever be the same and they will be forced to live with the consequences of their actions. Hope Gap is pithy, engaging, and insightful—the kind of movie we desperately need more of. 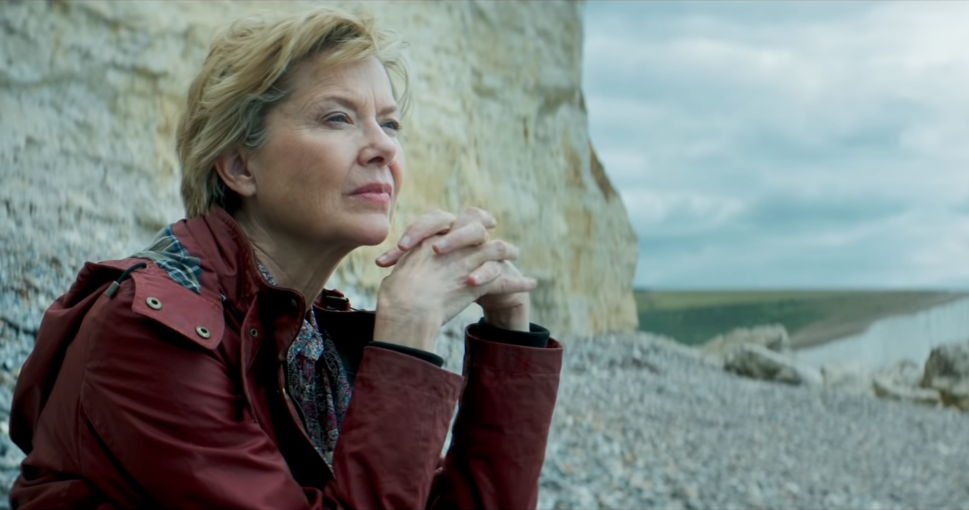