Do human beings operate out of their own volition, free to choose and love and act on the strength of singular whims? Or are we all hurtling together on a set course to a pre-determined end that no level of interference can change or alter?

There are convincing philosophical and scientific arguments to be made for both schools of thought (in a world where Parasite rightfully won Best Picture, perhaps destiny does exist). That clash of two disharmonious elements sits at the epicenter of Devs, Alex Garland’s (Annihilation, Ex Machina) new FX limited series set to air exclusively on Hulu.

“The older I get, the more I think that our lives are just how we deal with dissonance,” Garland recently told Observer. That dissonance reverberates outward through the series like a concussive shock wave, sloshing around our brain chemistry until the distinctions between thought and reality become blurred.

In this era of too much content where tens of billions of dollars in found money is funneled into entertainment, Garland’s grand unifying theory doubles as the dissonance between an industry desperate for content, but rarely capable of supplying anything new.

In a move that mirrors the show’s genesis as a basic cable creation being re-routed to streaming, Devs takes visual and thematic aesthetics of previous tales and rewires them into something new. It’s a mix of Déjà Vu, Spider-Man: Into the Spider-Verse, 2001: A Space Odyssey, and Looper and yet it’s unlike anything on TV. You’re perhaps familiar with its science-fiction trappings—the flashing color coded lights, futuristic post-modern design with sleek aesthetics, and the sinister-overtone it all assumes. But this alternative offering distinguishes itself from the 530-plus other scripted series on TV.

Garland likes to play with perspective. In the pilot, we see characters through lenses—grand glass panes, reflective surfaces, mirrors. Later in the show, we see characters through an entirely different, reality-redefining lens, but that’s a conversation for later in its run. It’s not so much a deliberate visual through-line as it is “embedded into the medium,” Garland tells Observer.

“It often becomes not so much a plotted thing. It’s more about the kind of contact you want to have with the cast—it can help classify your response as a viewer. If you just put the lens on the actor really close and train the background to focus, you start with a really stark connection that you don’t have in the reflection version…It’s a case by case basis about what kind of relationship the viewer has with the character.”

The types of relationships Garland sets out to formulate in Devs are dynamic ones. Between the viewer and the characters, yes, but also between the characters themselves. Katie (Alison Pill), Forest’s right-hand woman with a splash of Lady Macbeth, describes humans as “hardwired magical thinkers” early on. Even the most rational of us are overcome by emotional decision-making. This becomes abundantly clear in a set of choices made by surrounding characters.

One character setting up a motif or theme and then another character unknowingly executing it in a different context soon becomes a recurring conceit in Devs. Parallels, duality, connections both subtle and overt, and oppositional ideologies create this web of interlinked narratives that quickly form an engrossing mystery. The unknown becomes the show’s central driving force (which has its own pros and cons), but not in the bait-y way that Westworld Season 2 or the stacked mystery boxes of Lost fell prey to.

“It’s really about all of the characters experiencing dissonance,” Garland said.

He continued: “We all have these funny dichotomies—loving and hating someone at the same time or feeling like you really understand someone but are also really confused by them. We oscillate between these states and the way we oscillate between them affects whoever we’re around. They’re all these sort of strange, vibrating particles that never seem to settle in a particular state.”

Garland won’t be rampaging through the nearest Apple store with a baseball bat, but he isn’t exactly a champion of technology. Both his films touch upon the perils of mankind’s reach exceeding its grasp and the resulting physical and psychological fallout of such hubris. His work is infused with a Kubrickian dread when it comes to advancement in the field and Devs is coded in a similar language.

The series channels Garland’s belief that technology has become our new religion and that we treat these Silicon Valley entrepreneurs as if they have “messiah-type qualities.”

“The products they’re offering appear to be products that are going to contain some secret that will improve your life,” he said. “It will make you happier to have this new phone than you were before. [Tech companies] are doing something that affects our society a lot. They have enormous power and that makes me nervous.”

That unease is palpable in Devs. The company Amaya is a not so subtle reflection of our real-world corporate concerns (hello, Facebook; good morning, Apple). That distrustful relationship with technology is what leads Devs to its organizing principle: determinism.

Determinism is the theory that all events, including human action, are pre-determined. It suggests that we have no actual control over our own lives and choices. It’s a bleak theory and Devs ponders, in its most significant sci-fi leanings, whether the illusion of free will is better than the abject understanding of determinism’s truth. It’s an idea Garland both believes in—what better way to reconcile the hazards of unchecked technological growth and society’s resulting reliance upon it—and uses as the catalyst for his mind-bending series.

“When I came across the idea of determinism, I found myself wondering: how do I challenge it?” he said. “The thing that interested me about determinism and the way it relates to free will is that it was an idea that felt counterintuitive to one’s own life because we feel pretty certain that we have free will. But the more one looks for spontaneous events, the more one realizes how hard they are to find. Eventually, you might reach a point at which you realize we live in a non-magical universe.”

When you set yourself within the eye of a storm, it’s easy to underestimate the destruction it can wreak from that vantage point. Perception is relative. Garland is operating from a similar launching point on Devs, which brings forth a philosophical debate about the universe.

“We have not caught up with understanding or processing the power of technology. It seems like it’s a bit out of control and that scares me,” he said.

And that’s when it hits me. So much of today’s entertainment is made from a point of confidence. We trumpet our own understanding and power over the universe at every turn. An anonymous farm boy overthrows an evil intergalactic empire; a rejected and ignored orphan turns out to be the magical Chosen One. What separates Devs is that it comes from a place of deep fear. That’s what makes it unique in today’s bottomless sea of entertainment. That’s what makes it worthwhile. 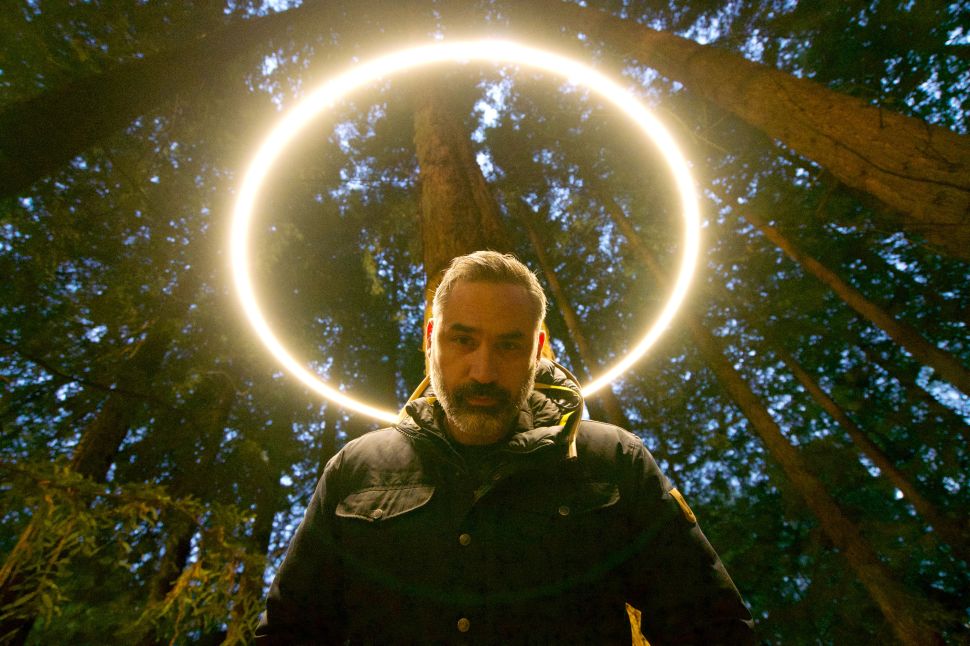