The film, a highly anticipated critical smash, had been out in theaters for less than a week when the inevitable became obvious. The coronavirus pandemic was growing, forcing theaters across the country to start cutting capacity and selectively close their doors. Soon enough, the outbreak would lead to a nationwide cinema shutdown. That was when the movie’s distributor sprang into action.

For the next week, a dozen employees worked day and night to create a technological fix, built on top of the company’s new streaming service, so that audiences at home could still enjoy the movie. And late last week, to much media fanfare, the distributor debuted its new, paradigm-shifting home release: Bacurau, available on the new Kino Marquee streaming service.

The unexpected early availability may be the only thing the Brazilian Cannes Jury Prize winner and Universal’s latest animated family movie Trolls World Tour have in common, but the significance can’t be understated.

Like nearly every other brick-and-mortar business in the United States, movie theaters have shuttered nationwide in the wake of COVID-19, throwing the entire film industry further into disarray after a weak 2019. In response, the five major studios have largely pursued two paths: pushing movies originally due out this spring to release dates between six months (such as the Bond movie No Time to Die) and a year (Fast & Furious 9) down the line, while rushing all recent releases to digital download (Bloodshot and Trolls World Tour wide) and streaming services (Onward).

How those in the indie film world should or even can respond to this crisis is much more in flux. What’s clear, however, is that survival of an art form that was already in a precarious position before the pandemic will depend on creativity, improvisation and the willingness to stare down doom during an unprecedented calamity.

In some cases, indie distributors were well-positioned for this kind of sudden twist in exhibition options. Putting out movies on video on demand is nothing new for the industry, which has pioneered the day-and-date release model and takes in a significant portion of its earnings from at-home viewing. IFC Films has been offering on-demand viewing since 2006 and introduced its own streaming service last spring. Kino Lorber launched its bespoke VOD service, Kino Now, last year as well (Marquee builds on its architecture). But the arthouse cinema world faces problems of scale, technological availability and immediate financial gaps that can’t be ignored.

The blessings and barriers to VOD options

First and foremost, there is a divide in capability and platform space.

Along with IFC and Kino, distributors such as Film Movement and Oscilloscope have been able to get their titles directly online through their own online services; Film Movement is also teaming with theaters for a virtual screening room, while Oscilloscope is offering downloads of 10 of its films, including several that will miss their theatrical windows; the distributor will donate part of the proceeds to the Cinema Worker Solidarity Fund.

Other distributors, however, have little hope of getting their movies available to download well ahead of their intended digital dates, because doing so requires infrastructure and a lot of work, both technical and relational.

“The platforms are willing to speed up the process [for studios]. For [many] indie films, there’s no quick pipeline to digital unless they resort to Vimeo or Amazon Video Direct,” explains Kyle Greenberg, an indie distribution vet who now runs the boutique distribution and marketing firm Circle Collective. “Before all of this, I’d been working on availing films for digital in July. For films I want to put up for TVOD in early July, I need to have that stuff set by the end of the month.”

That’s a three to four month gap between the delivering of assets and launching on large digital download platforms. And as Greenberg notes, in a tanking economy, the prospect of succeeding financially on a niche paid download is challenging.

Movies are, by definition, “non-essential” in a public health crisis

“I want to see how consumers respond,” he says. “There’s such a wealth of material, someone doesn’t really need to pay for anything. All the ad-driven video on demand platforms like Pluto are seeing a huge jump in viewership this week. A lot of people are losing their jobs right now and realistically, are people going to spend $15 to buy a movie or pay for a digital ticket when they can just watch something else on digital for free?”

Three major chains—AMC, Regal and Cinemark—own about half of the 44,000 screens in the United States. The rest are owned by much smaller chains or independent, single-location companies; Variety reported last year that of the 600 members of the National Association of Theater Owners, at least 91 were single-screen theaters, while over 400 had ten screens or less. The small theaters that run big studio movies have long been endangered (and are frequently acquired by the major chains). Arthouse theaters that play independent movies generally have the benefit of less local competition, but the pandemic negates the one true advantage that these theaters can boast during normal times.

Whereas most moviegoers generally frequent whichever big chain theater has the plushest seats and largest screens, arthouse cinemas offer a different kind of luxury: community. They are frequently supported by memberships and fundraiser drives in addition to ticket sales, and seeing a film at these theaters is often a social event, with Q&As from visiting filmmakers and other special features.

Given their lack of screens and massive appeal, however, they very rarely turn a significant profit, especially as rents around the country skyrocket. More often, they are skin-of-their-teeth operations, and every dollar at the box office, whether it comes from a new art flick or midnight repertory event, is crucial.

Now, with zero income for the foreseeable future, theaters are being forced to furlough and lay off long-time employees, accelerating a pre-existing crisis also powered by the advent of streaming at home and the transition to digital projection on the big screen. Over 2,000 theaters have closed over the last 25 years, and while it’s been more steady over the past decade, income streams have thinned.

Even distributors that have a presence in VOD and streaming have a symbiotic relationship with the arthouse cinemas. With most of the media focused on the biggest blockbusters and local film magazines nearly extinct, arthouses are absolutely crucial to an independent film’s success. They are often the platform and the marketing machine, driving excitement for what might be otherwise obscure titles, and still drive a sizable portion of their profits.

“It’s a very tight knit community and every piece of this business is reliant upon another piece, and so we really need to support each other,” says Arianna Bocco, the executive vice president at IFC Films.

With their survivals intertwined, both sides have been working to help one another through this ongoing pandemic. Instead of trying to forge ahead solo and promote Bacurau to niche audiences scattered across the country, Kino Lorber is partnering with indie theaters on its virtual screening room. Shuttered theaters can sell tickets to an online hub, through which audiences can watch Bacurau at home, via Apple TV, Roku and, soon, the Amazon Fire. The studio and theater split the profits of each ticket sold; right now, there are 79 theaters operating Kino Marquee, with 150 overall lined up for early April.

“It’s really uniquely adapted to the needs of the theaters and the whole project is very much movie theater-centric,” says Richard Lorber, the distributor’s co-founder and CEO. “It’s about the theaters activating their own base of support: their loyal, long-standing customers, their subscribers and members, their funders, and getting the word out to them and then making it seamlessly easy for them to just click a couple of buttons and pay 12 bucks and watch the movie.”

One-size solutions will not fit all

Film Movement now has a similar service for some cinemas, but other theaters are opting for more bespoke, improvised solutions. Few cinemas are in the same exact position. Alison Kozberg, the managing director of Art House Convergence, an alliance of indie theaters across the country, notes that many of her members face unique scenarios. Some own their buildings, while others are tenants to landlords; some have a membership model; others focus on selling tickets as their main revenue drivers, with events like film festivals and private screenings providing a decent chunk of their earnings..

The variety of circumstances has produced a variety of responses thus far, from festivals migrating to the internet and live-streamed Q&As with filmmaking talent to increased fundraising from patrons. Some owners have gotten even more creative; the famed Belcourt Theater in Nashville recently held a screening of Space Jam over Twitch, attracting a far different crowd than the cinephiles who usually visit nonprofit theatrical centers.

“I see theaters adapting their programming for customers of all ages, using a combination of Vimeo, Twitter, Facebook, and this is just within one week,” Kozberg says. “So I think there’s more innovation and creativity to come. And I do think that it is really important that everyone who loves cinema invest in their theater now.”

Kozberg stresses that last part, noting that to her the virtual cinema “is not intended to replace movie theaters,” just simply supplement them in a pinch. Still, Lorber sees a potential future for Kino Marquee beyond this immediate deployment; the company has already added several titles to its virtual offerings and its CEO suggests it could certainly be used to extend the lives of films that have limited runs in theaters with only a few screens.

The future is still uncertain

How many theaters survive is still the main question, and it’s impossible to begin to estimate. Whenever society emerges from this unprecedented public health crisis quarantine, there will be endless variables. For theaters, it’s unclear whether people will want to congregate in large groups after so many months of being told to socially distance themselves and avoid germs at all costs. Kozberg says that she hopes the absence of the theatrical experience will remind people how much they value it, while Greenberg suggests the studios’ panic could wind up giving indies an advantage.

“I’d like to think that with all these studios now pushing their product as far back as they possibly can, if a light were to switch on in a month and things can get back to normal, it may leave a situation where there’s a complete open gap for indie films this summer,” he says. Indeed, more movies are being pushed back—Warner Bros. just pushed back its summer blockbuster Wonder Woman 1984 from June to mid-August and took its adaptation of In the Heights off the schedule indefinitely.

“Theaters will be hungry for content and we’re eager for their doors to open up again in any way.”

Just how many theaters remains to be seen. 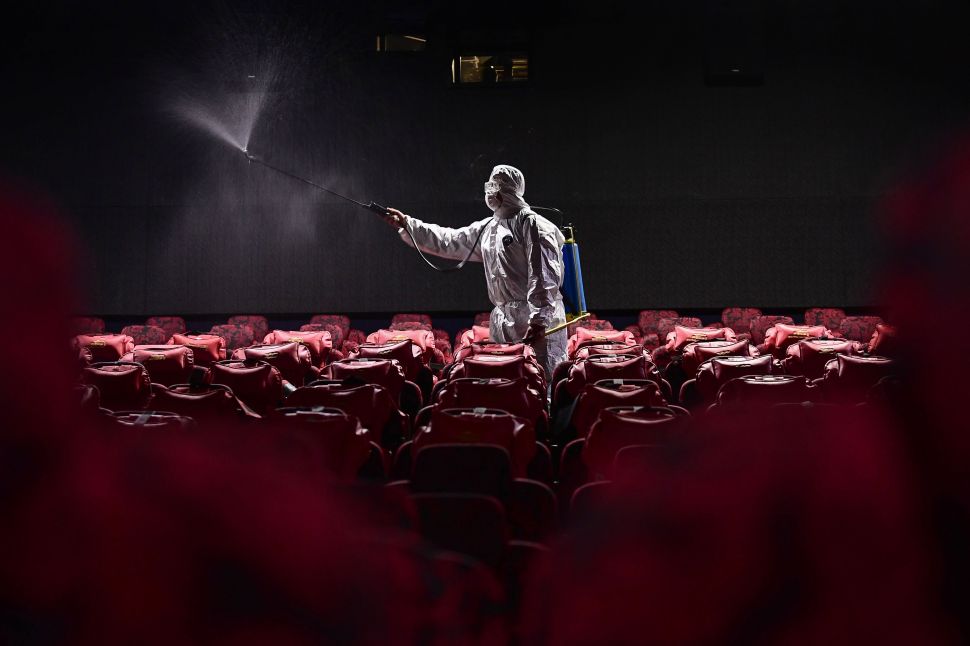