The fact that the isolated, no-contact reality dating show Love Is Blind  went viral just weeks before social distancing became a widespread and necessary reality in the U.S. is a coincidence not lost on many. To Brooklyn-based friends and roommates Thi Q. Lam, 27, and Rance Nix, 28, it’s also an opportunity for online connection. The pair have launched “Love Is Quarantine,” a virtual project playing on the popular Netflix show that organizes “pandemic pods” to help spread some love over the phone during the global coronavirus pandemic.

After brainstorming the idea together in the first few days of New York’s quarantine, Lam and Nix set up a Google spreadsheet and Instagram account at the top of last week. Reaching out to their friends first, by Tuesday night, 30 contestants in the first “season” (with each season lasting only one night) were matched for dates. After the dates, contestants send in recap videos and texts that are shared to viewers following along at home through Instagram. The dates are organized in a random fashion, with no matchmaking involved.

SEE ALSO: Is Michonne Gone for Good on ‘The Walking Dead’?

In one week, the social media show has gained enormous traction, with over 14,000 followers on Instagram and a different “season” released every night. While many are wondering what to do during this period of social distance, Lam and Nix told Observer that they are the “busiest they’ve ever been.” Their Instagram account feels raw and authentic, consisting of screenshots from conversations with contestants and multiple lofi recap videos a day where faces are sporadically covered by two fingers to attempt partial anonymity.

“Honestly we’re winging it, we’re riding the wave,” Lam said. “We’re going into this quarantine as two extroverts, so we’ll keep doing this until we get our jobs back.” Despite both being currently out of work, they’re not looking to monetize what they’re doing, instead creating merch to donate 100% of the proceeds to “Covid-19 efforts.” Rallying designers from the internet to join them, the project is a perfect example of the nicer sides of the internet that we’re seeing through the pandemic. Centered on connection, anyone that wants to join “Love Is Quarantine” can, be it through becoming a contestant, volunteering their skills or following along and recommending new themed nights. This has included a recent “boomer night”—where all contestants were over the age of 60.

“We want to try and keep this as organic as possible, like a real date,” explains Nix. “We simply want to just set people up on dates, and if it works out, great. If not, [it] is something that was kind of cool in the middle of their boredom at home.” As anxiety around the pandemic is sky-high across the U.S., with the hardest-hit city New York being Lam and Nix’s home base, the popularity of this Instagram reality show reflects the desperate need for light-hearted fun in amongst the crisis. It also represents how much we currently rely on the internet for a sense of connection.

AFTER 7 DATES Anya has chosen Abi! Though they are MILES APART. LOVE JOINS THEM TOGETHER! ❤️😊✨

“People are looking for community and to be entertained, but, most importantly, people are still looking for love. That will never go away,” says Nix. “I think that’s why people are drawn to this show and people are drawn to how crazy and chaotic and sporadic that this whole thing is.” This rings true for Anya Schulman, nicknamed the “Horse Girl” of season 4. (Many viewers are picking favorite couples and commenting nicknames based on the contestants interests.)

“As a queer woman, it’s tough to meet people no matter what,” says Schulman. “I talked to seven strangers for six hours and felt exhausted by the end. It was the most fun I’ve had in quarantine and it was surreal to have six hours of conversation with people I wouldn’t have otherwise crossed paths with.” Schulman didn’t know what her dates looked like until after, when watching the videos posted to Instagram. She says that she and Abi, another contestant, are still texting.

In unprecedented times, “Love Is Quarantine” is a glimmer of hope for our love lives. And, like social distancing, it’s not going away anytime soon. “I think this is just a fun opportunity to spread some love,” says Lam. “We’re in a position of privilege, we are relatively healthy, grateful and certainly want to help as much as we can in a tangible way.”

For those looking for help in the form of random matchmaking, or even those just looking for a distraction, the pair have assured us that “Love Is Quarantine” will be providing a safe place on the internet “all day every day” until a sense of normalcy returns across the nation. 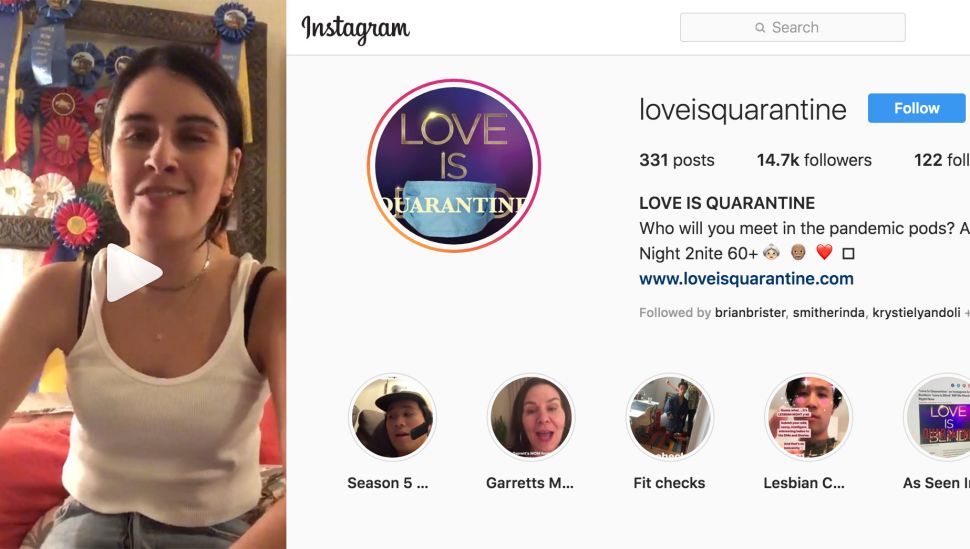