There’s more than enough room in this world for both Marvel and DC to produce generation-inspiring comic books and, now, world-dominating blockbuster films. DC has deep roots on the big screen thanks to Christopher Reeve’s Superman franchise and Tim Burton’s early Batman movies. Marvel, meanwhile, has been going strong theatrically since the 1990s and now lays claim to the Marvel Cinematic Universe, Hollywood’s most consistently successful franchise. While fans may draw battle lines between the two, both brands have proven capable of producing massive global hits.

But while Marvel and DC can deliver billion dollar blockbusters at the box office, which shop is generating the most bang for its buck? Return on investment, or pure profits, is an often overlooked element of Hollywood accounting. Hundreds of millions of dollars in ticket sales looks fine and dandy on its own, but not if your production budgets and marketing spends cost just as much.

Marvel is the clear winner in terms of raw box office numbers, claiming nine of the ten highest-grossing films overall between the two studios. 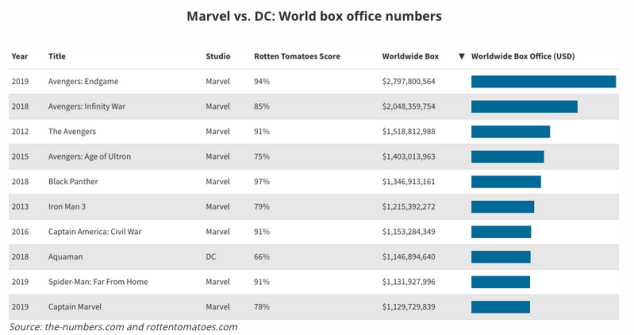 Unsurprisingly, the decade-in-the-making conclusion to the Infinity Saga—Avengers: Infinity War and Avengers: Endgame—claimed the top two spots. This two-parter was the exclamation point on Marvel Studios head Kevin Feige’s grand experiment to create a shared cinematic universe with crossover continuity between several franchises. In an attempt to match Marvel’s success and ameliorate the somewhat disappointing returns on 2013’s Man of Steel ($668 million), DC rushed into a team-up of its own with 2016’s Batman v Superman: Dawn of Justice ($872 million) and 2017’s Justice League ($658 million). Neither film met internal or external expectations critically or commercially.

Since then, however, DC has emphasized standalone films that don’t rely on world-building, cameos or shared cinematic universe connections. In doing so, they have found considerable success. Jason Momoa’s Aquaman ($1.1 billion) is the banner’s highest-grossing film ever and DC’s only entry in the top-10 among both comic book producers. But, more importantly, this new strategy has improved DC’s pure profits.

Marvel (387 percent) still edges out DC (343 percent) in terms of return on investment, per Reviews.org, while claiming eight out of the top 10 spots in the category. But DC now holds the top spot overall thanks to a pivot to a mid-budget, filmmaker-driven genre experiment in Joker. The $55 million picture earned more than $1 billion at the global box office for a tremendous ROI of 1,949 percent. All in all, the film generated more than $500 million in pure profits. 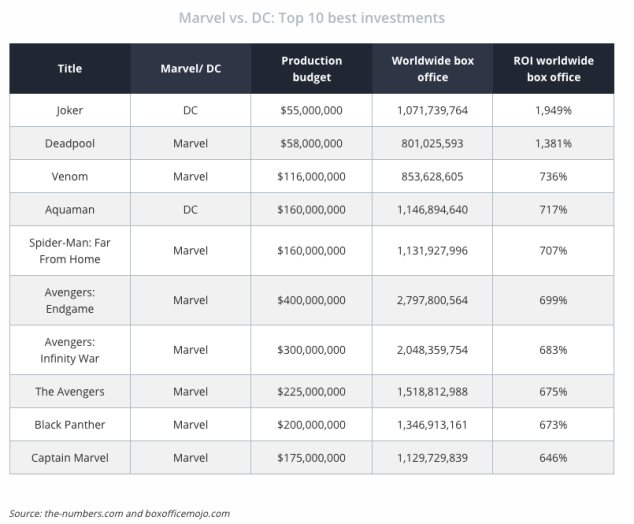 It’s interesting to note that the first five entries on the list carried budgets of $160 million or less while four of the last five films cost $200 million or more. In the right circumstances, smaller spectacles can lead to bigger profits. Joker hardly relied on CGI or traditional blockbuster action, instead formulating an old-school psychological character study that generated conversation. Deadpool boasted plenty of entertaining superhero fights, but expanded the genre as a raunchy action comedy that just so happened to feature a comic book character.

There’s no one right way to deliver a popular movie, as Marvel and DC have shown. Art and commerce don’t come with an instruction manual. While Marvel may still top DC in box office totals and ROI, it’s clear that the gap between the two is shrinking. Let’s check back after Black Widow and Wonder Woman 1984 have hit theaters. 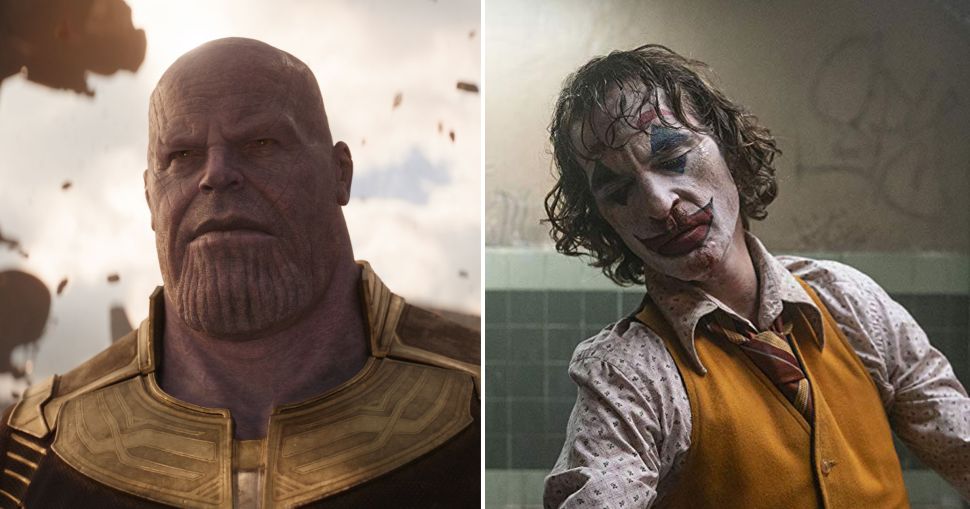