Any fair week in New York City comes with a certain amount of stress and sense of being overwhelmed; despite the fact that fairs involve elegant rooms packed with people who’re passionate about the arts, these aren’t the same sedate environments conjured by, say, museums. These are marketplaces, and very transparently so. That can make it hard to appreciate the art in front of you for what it is, but on Thursday, a tour of galleries in Chinatown and the Lower East Side led by New Art Dealers Alliance member Ellie Rines served as a completely refreshing counterpoint to art fair madness. Beginning at Rines’ own meticulously curated gallery 56 Henry, a tour group of approximately 50 enthusiastic people wound its way through a striking cluster of hidden-away galleries, some of which were filled with paintings that caused onlookers to genuinely stop in their tracks.

To kick things off, Rines explained her philosophy when it comes to 56 Henry. “I think sometimes when you go to an artist-run space, it’s very much the artist’s vision and what they’re interested in, and then that’s expanded and reflected in the program,” Rines said. “But because I’m not an artist and I just want to support artists, it’s instead me really looking at new work out there and trying to find people who I think are slowly pushing something forward or making us think about things differently.”

Rines is currently primarily showcasing Kunle Martins, an artist who uses salvaged cardboard as the canvases for his intimate portraits of friends and lovers, and over the course of the afternoon, tour attendees were introduced to several more compelling artists who perhaps wouldn’t yet be showcased in high-stakes, blue-chip environments. At Lubov gallery, the tour was treated to a glimpse of new work by Shannon Cartier Lucy, a fascinating artist who took a long sabbatical from making art after gaining a ton of early attention in the 2000s. Lucy’s work is both eerie and funny; a hard line to walk, but one that’s been informed by living amidst the fallout from her father’s schizophrenia.

Over the course of the afternoon, the group was introduced to a great many additional small galleries including Situations, Essex Flowers, Foxy Production and Marinaro, but indisputably the most thrilling visit was to Jeffrey Stark gallery, an absolutely tiny space tucked away in the basement of a bustling Chinatown mall. Jeffrey Stark is so small, you actually can’t even go inside: instead, you have to view the current installation, which is a combination of medical bills and TikTok-adjacent dancing videos from the artist Matt Hilvers, from the hallway.

Overall, the tour provided a welcome reminder that someone could spend years in New York City thinking they’d decoded all its secrets and be wrong every time: there’s always more to discover. 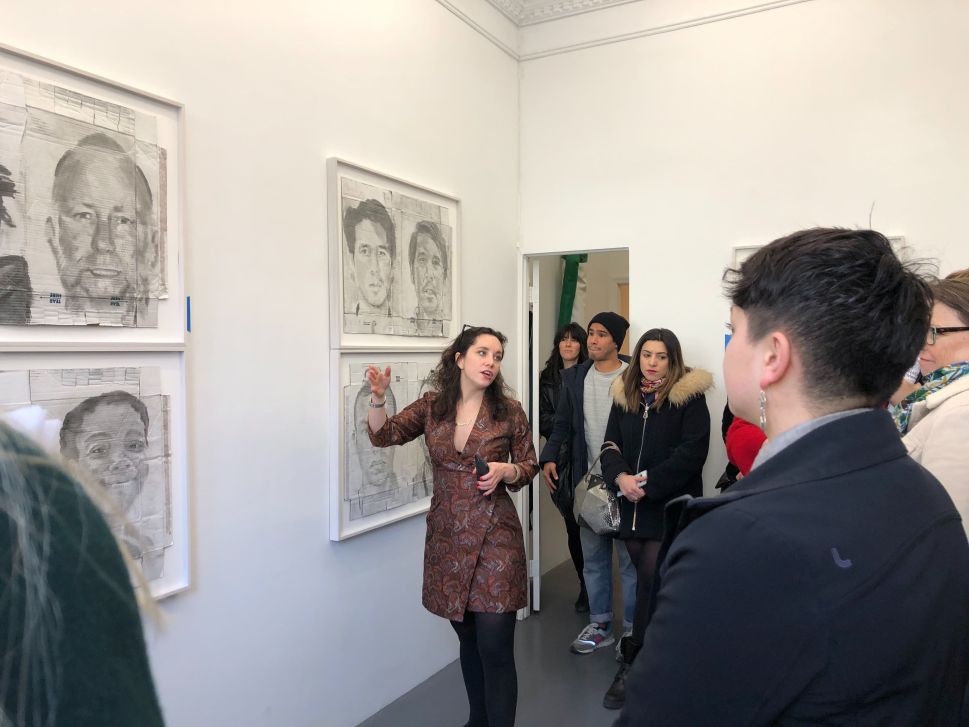