Even non-sports fans are well aware of NBA star LeBron James’ greatnessdespite 17 years of professional wear-and-tear. He still remains arguably the greatest player in the world even as upstarts like Dallas’ Luka Dončić threaten that title. This makes for an usual hierarchy—James is a king whose reign is nearing its end.

Similarly, Netflix remains the long-standing champion of the streaming realm. The incumbent power has more subscribers both in the United States (60 million) and abroad (100 million-plus) than all of its challengers. No other direct-to-consumer platform can match Netflix’s annual revenue or endless content library. Like James, Netflix is king. But many have anointed Disney+ and its war chest of blockbuster franchise brands as a worthy usurper to the throne. So, is Netflix’s reign soon to be cut short? That’s a battle that will be decided by both users and investors, two key pillars of support that are not always aligned in the streaming wars.

Much like the 21-year-old Dončić, Disney+ has astounded the industry with its blazing start. Since launching on Nov. 12, the service has attracted 28.6 million subscribers, nearly half of Netflix’s domestic total. Yet outside of The Mandalorian, Disney+ does not yet have the wealth of original programming to maintain elite engagement. Instead, and understandably, Disney+ is relying on legacy titles such as The Simpsons, Marvel and Star Wars to carry the service.

Netflix, despite its flaws, spends roughly 85 percent of its sizable annual content budget on originals. Couple that with the service’s back catalog of licensed programming such as The Office and it’s easy to see why users who subscribe to both services use Netflix more per week, according to data provided to Observer by streaming guide Reelgood. 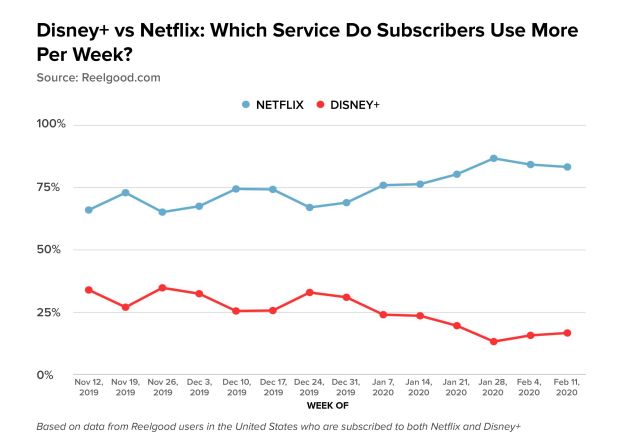 Reelgood, which tracks every TV show and movie available online, put together a composite of the 50 most-watched series and films on Netflix and Disney+ since the latter’s mid-November launch. While Disney+ titles such as The Mandalorian, and various Marvel, Star Wars and Pixar offerings ranked well, Netflix dominated in both categories overall. 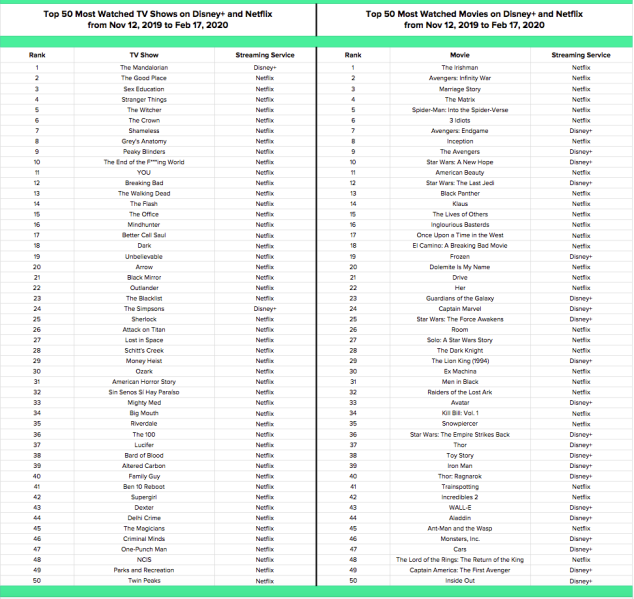 When it comes to the day-to-day whims of users, Netflix remains in the lead. But the financial prospects of both operations show an inverse situation.

Disney executives project Disney+ to become profitable by 2025. At $7 per month and with an attract $13 per month bundle offer that includes Hulu and ESPN+, not to mention strategic partnerships with Verizon, Disney has proven its pricing power on the open market. It’s an easy and affordable purchase for families and has enough high-profile IP—especially with blockbuster miniseries set in the Star Wars and Marvel Cinematic Universes en route—to attract cross-demographic interest.

Due to its aggressive spending, Netflix has spent years collecting enormous long-term debt and still typically operates in the red from year to year. Amid price increases and improved competition in the direct-to-consumer marketplace, Netflix’s domestic growth has more or less plateaued.

Leading data and analytics firm GlobalData, which analyzes and showcases sentiments across companies and sectors by scanning through earning transcripts and filing documents, found that Netflix’s overall sentiment score—which roughly mirrors investor confidence—declined by 11 percent in the fourth quarter (Q4) of 2019 compared to Q3 2019. This has coincided with a drop in Netflix’s share value in recent quarters. 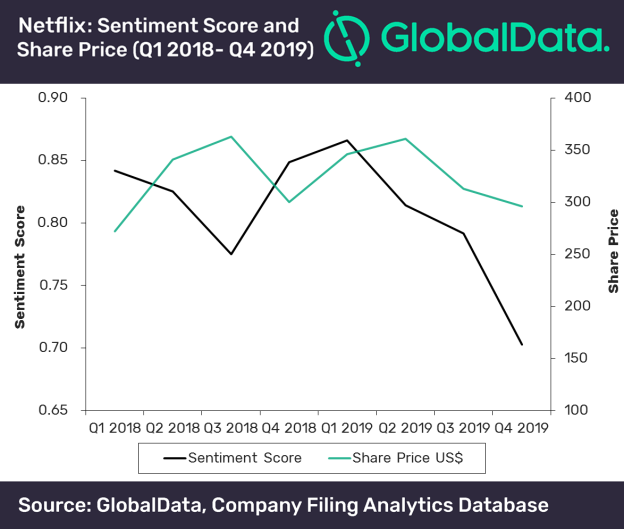 Netflix has not changed its domestic pricing strategy despite rising price pressures and decelerated growth. The company has even lowered its Q1 2020 outlook as a result. But overseas, the company has embraced innovation and unique structure with mobile-only plans, flexible pricing and years-long unmatched investments in original local language programming. Netflix’s international efforts are its biggest advantage in the ongoing streaming wars.

“However, outside the U.S., Netflix has not seen a drastic impact from competition,” Aurojyoti Bose, Lead Analyst at GlobalData, said in a statement. “Unlike the U.S., the company has followed a low price strategy to achieve customer traction in countries such as India, Indonesia and Malaysia, which also ensued growth in its international subscriber base.”

Disney+ will launch in the U.K. and across Europe on March 24 and the company hopes the service can be made available worldwide within two years. Hulu, which Disney also controls, is targeting 2021 for an international rollout. HBO Max and Peacock will also both begin domestically before shifting its focus on overseas markets. At the moment, the only streaming services with any sort of global footprint are Amazon Video Prime and Apple TV+, neither of which are competing on Netflix’s level. While that doesn’t completely balance out its lost ground domestically, it does provide and upside moving forward.

“Netflix’s management recognizes the threat of new competition and has taken steps to fight its rivals by starting a partnership with Samsung,” Bose said. “It would be interesting to see what other strategies the company is considering in future to mitigate the risk of subscriber loss.”

This cuts to the heart of the streaming industry’s dissonance. Like LeBron James, Netflix remains a long-standing titan within its field, the best in the business. But the cracks within its armor are beginning to reveal themselves and new competition threatens to upend the hierarchy entirely. While general users still flock to Netflix far more frequently, the investors who pull the strings behind the scenes are losing confidence.

Which is more important to the long-term success of a streaming service—the customer base or Wall Street, which provides a longer financial leash? We’re soon to find out. 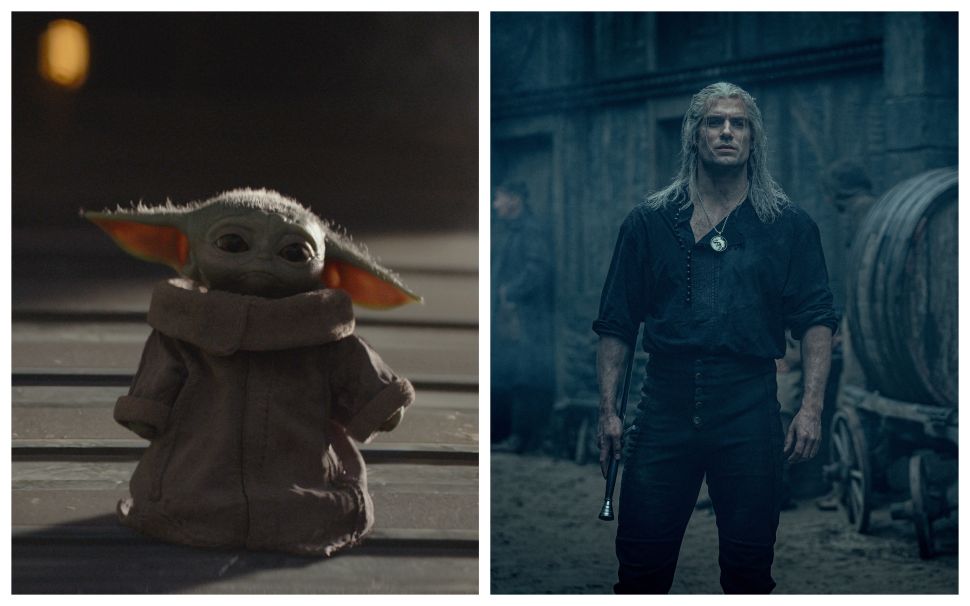