The stock market is in free fall as Wall Street is powerless to combat the global impact of the coronavirus pandemic. Yet Netflix stock, trading at nearly $320 per share as of this writing, is holding up relatively well, having only fallen about 17 percent over the last month. That looks like a miracle compared to rivals such as Comcast (24 percent), Disney (38 percent), and ViacomCBS (66 percent) in the same span. COVID-19 and social distancing have created a vacuum where huge numbers of people are self-isolating in their homes without access to normal amenities to fill the hours of the day. As a result, Netflix streaming serves as a security blanket. As cynical as it is to consider, the numbers show Netflix could thrive in a time of global lockdown and further its lead in the streaming wars.

The company, infamous for its mammoth annual content budgets (estimated at $17 billion for 2020), will actually lessen its own financial burden this year thanks to the pandemic, as production in the U.S. and Canada has been halted and The Witcher becomes the first major U.K. project to suspend filming as well. “Cash burn should be less as they cease production on all projects,” Steve Birenberg, founder of Northlake Capital, told Observer. “I think there is enough content already available that a lack of fresh content will not be a problem. I am long on Netflix and getting more positive toward it as the stock has finally taken a hard hit after initially holding up quite well on the theory it is a winner if people are staying at home.”

Last April, Netflix offered $2 billion more in debt to fund content spending, and then did the same again in October. This has been their modus operandi for some time as the company has racked up more than $12 billion in long-term debt. Despite generating more annual revenue ($20 billion-plus) than its studio rivals, Netflix rarely operates on a yearly profit due to its enormous expenditures and kick the can down the road mentality. Yet with the Federal Reserve Bank slashing interest rates to historical lows, it has unwittingly enabled Netflix’s debt spending.

“This is a dream scenario for them,” Lynnwood Bibbens, CEO of Reach TV, the first Nielsen-rated, linear, short-form OTT entertainment network, told Observer. “The worse thing for them is high interest rates as they plan to keep increasing their spend on original content. Debt lenders, in particular Morgan Stanley, will have no problem securing debt funding.”

Yet not every analyst is as bullish. Preliminary analysis from Needham & Co. shows that Netflix may actually stand to lose revenue as employment uncertainty leads to greater fiscal restraint among consumers. Netflix relies on subscription revenue which is set at fixed monthly increments. Increased viewership is good for the brand and may ameliorate long-term churn rates, but it doesn’t provide any immediate economic benefit. Existing subscribers can double their Netflix consumption while in self-quarantine and it doesn’t add a single new dollar to the platform’s coffers.

The streaming company’s primary goal is to add new subscribers, a difficult proposition in financially strained times. As a result, Needham & Co project streaming revenue to decline 6 percent in the U.S. and 28 percent in international markets. Some even believe that COVID-19 will funnel customers elsewhere in a crowded streaming market.

“At least in the U.S., I think newer providers (e.g. Disney+) are more likely than Netflix to see a run of new subscribers because Netflix’s penetration is already so high,” Jon Giegengack, Principal at Hub Entertainment Research, told Observer. “More viewing doesn’t equate to more revenue for Netflix or other ‘all you can eat’ platforms. But the fact that people have more time to fill means they will need more content to fill it, and that may reduce churn as people hang onto providers they might otherwise have dropped.”

To beat #COVID19, we #StayAtHome

Teleworking & streaming help a lot but infrastructures might be in strain.

To secure Internet access for all, let’s #SwitchToStandard definition when HD is not necessary.

Though production has been shut down, most of Netflix’s second-quarter slate is ready to premiere on schedule, providing a quick boon of fresh content that certain competitors can’t match. Linear television is looking at abrupt conclusions to in-season series while cable is delaying the premieres of certain shows amid production shut-downs. Netflix, meanwhile, will debut new series such as #blackAF, NAILED IT!, Middleditch & Schwartz, Ryan Murphy’s Hollywood, Octavia Spencer’s Self Made, Unorthodox as well as the third season of Ozark in the coming weeks. Given Netflix’s prodigious library size and leading recommendation algorithms, Credit Suisse believes they can weather the storm. It’s a sentiment shared by others.

“I‘m bullish on the impact this will have for Netflix,” Rob Drury, VP of Client Partnerships (Media &TV) at CSM Sports & Entertainment, told Observer. “Their business is driven primarily by renewal rates, and on a global scale people are experiencing first-hand the benefit of Netflix’s content library. Social distancing is adding an entirely new dimension to content bingeing.”

There’s no easy solution in a time of global abnormality. More than 120,000 jobs have already been lost in Hollywood alone and COVID-19’s impact on the global workforce is expected to worsen significantly. Self-isolation and social distancing is disrupting standard viewing habits. As a result, multiple schools of thought have sprouted up. Some believe Netflix is a Goliath, perfectly built for this exact challenge. Others see it as a window of opportunity for new streaming entrants to take root. Only time will bear out the reality. 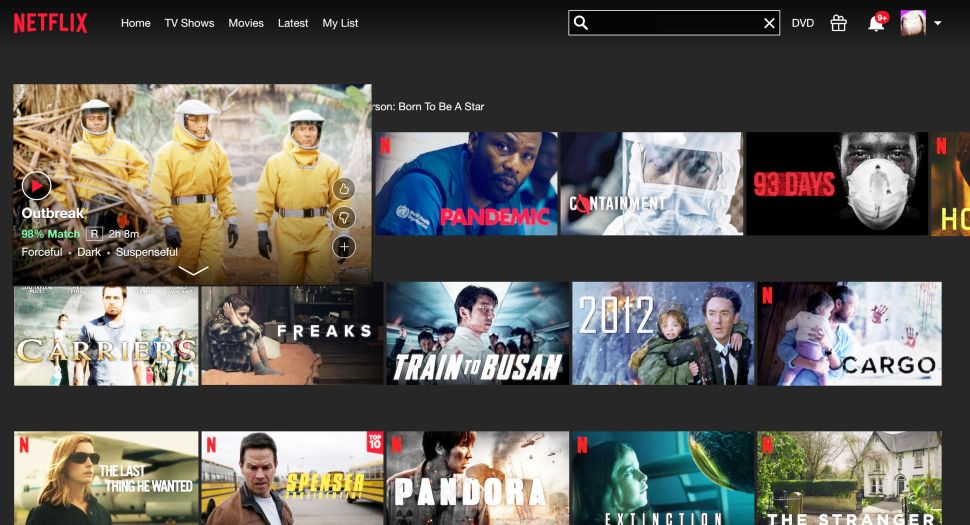