The playhouse has always convened clashing personality types: Attention-starved extroverts strutting and fretting for introverts in shadows ignoring each other. True, the audience isn’t always in the dark and the fourth wall is an antique construct, but you get the idea. They act. We watch. Some theater lovers refuse to call streaming theater real theater, a curious inversion we should call pics, then it didn’t happen. It’s not live, they wail, you have to be there. But, introverts counter in a Wildean vein, doesn’t that make it a purer aesthetic experience? Just the solitary viewer watching a moment captured in all its perfect imperfection? I would not argue that digital performance is superior to live, but there’s plenty of detail and nuance you can get from it. I’ve enjoyed everything from spiffy, hi-def captures for NT Live to video that might have been shot, begrudgingly, by the stage manager’s aunt. If you’ve ever researched at the New York Public Library’s Theater on Film and Tape Archive, you know the range.

The point is, if you love theater, you should have some interest in streaming theater, and be cheered in these dreary times by the plethora of options. We listed a dozen big and small ones here, from the mainstream BroadwayHD to the brand-new, bite-size Viral Monologues by the 24 Hour Plays. Play-PerView launched this week: The always enchanting Maria Dizzia stars in a livestream reading of Lucas Hnath’s A Doll’s House, Part 2 ($5 tickets here). Two big European houses are streaming their archives for free: London’s National Theatre finally answered countless calls and will make its NT Live broadcasts free on YouTube starting April 2 with the groovy farce One Man, Two Guvnors, starring just-then-exploding James Corden. If your tastes run to deconstructed regietheater, Berlin’s supercool, experimental Schaubühne has a new broadcast every day around 1:30 p.m. Hamlet covered in mud and blood, screaming in German? Ja, natürlich.

Recently, I screened new, recorded productions from Rattlestick Playwrights Theater here in New York and San Francisco’s American Conservatory Theatre. One was Ren Dara Santiago’s The Siblings Play, which Rattlestick shot in its final March 14 performance. A.C.T. taped its virus-canceled productions of Brandon Jacobs-Jenkins’s Gloria and Lydia R. Diamond’s Toni Stone while they were in previews, and has made them available to ticket buyers.

So, wait: Is this a review? Not exactly. I’m not ready to swagger into the arena with anything more than enthusiasm, curiosity and experience. Can you have an enriching theater experience on your computer? Yes, if you give the screen the active focus you would the “real” thing. Get comfortable, turn off the lights, use headphones, have a sip of tea. Here we go; shut up, it’s starting.

I know the Rattlestick really well. Over the past 20-odd years, I must have visited it 100 times or more. I’ve waited in the bathroom line, which snakes from the aisle onto the stage and behind the set. I’ve gaped in admiration when directors and designers completely reconfigured its beaten-up, punk-rock-club vibe into something rich and strange—for Adam Rapp’s horizontal epic The Hallway Trilogy or the painfully denuded cavern of Samuel D. Hunter’s Lewiston/Clarkson. Only Soho Rep rivals Rattlestick for interior demolition and rebirth. So watching Ren Dara Santiago’s heartsore domestic drama via video was both homecoming and estrangement. Suddenly I was a security guard, waving through a closed-circuit window. Actually, that’s not fair to the videographers who captured, quite seamlessly, this touching and well-crafted play in a skillfully cut two-camera shoot.

The character-driven, memory-haunted action centers on two brothers and a sister clinging to the wreckage of a failed family. High-school senior Marie (Cindy De La Cruz), her older brother Leon (Ed Ventura) and middle-school-aged Marian (Mateo Ferro) live in Harlem circa 2014, in a household they essentially manage themselves. Their mother Lenora (Dalia Davi) and father Logan (Andy Lucien) split up over Logan’s drug dealing, which cost Lenora’s brother his life. Wracked by guilt and nearly suicidal, Logan first drove Leon away from the household, then abandoned the family. That was three years ago. Now, Marie is putting off college so she can look after Marian, an intelligent student who shows aptitude at tennis. Leon has found work at a bar, and Lenora goes on multiple dates, looking for Mr. Right and basically neglecting her responsibilities—financial and emotional. When Logan re-enters the siblings’ lives through contact with Marian, years of trauma and anger threaten what domestic cohesion there is.

This is a bold, impressive playwriting debut by Ren Dara Santiago, who shows a fine ear for the love-hate rhythms of a pressured family and a confident hand in shaping drama that skirts the edge of tragedy. Director Jenna Worsham and a perfectly calibrated cast bring the play alive on the intimate, explosive Rattlestick stage. Special shout-outs to set designer Angelica Borrero, and lighting and sound designers Zach Blane and Michael Costagliola, respectively, for creating a realistic but porous environment that allows the past to bleed into the present. The acting is gritty and passionate but leavened by humor, and Santiago’s earthly, yearning language jumps off the screen. With a Vimeo code, you can go home again.

This was a welcome opportunity to travel (mentally) to San Francisco’s storied A.C.T., and catch up with a play I’d missed: Brandon Jacobs-Jenkins’ savage media satire, which had its world premiere at the Vineyard Theatre five years ago. Here’s a workplace comedy-tragedy in which frustrated and ambitious Gen X editorial assistants at a chic New York magazine gossip about co-workers, despair of advancing, and curse the journo culture they thought would reward their talent and verve. Why did I miss this new work by the gifted author of An Octoroon and Appropriate? Let’s just say that in 2015, I was living the media nightmare, and didn’t need a play to remind me.

More fool I. Gloria is a witty, glossy horror show—especially viewed in the rearview of the present, as companies continue to flail in pursuit of clickbait, vanishing ads, and social-media static. The characters in Gloria are vain, pathetic, vicious, and talk a mile a minute. If it was good enough for the Restoration wits, it’s good enough for Jacobs-Jenkins. Our antiheroes include ulcerating, wanna-be author Dean (Jeremy Kahn), imperious, over-caffeinated Kendra (Melanie Arii Mah), affable but sadistic Ani (Martha Brigham) and beleaguered fact-checker Lorin (Matt Monaco), who reminds us—twice—that he just turned 37 years old and is going nowhere. The title character, played by Lauren English, is a copy editor who has been at the magazine for 15 years, which has left her drained, colorless, and a little crazy. Okay, let’s make that a lot crazy; the first act ends with a spasm of…something very disturbing that I won’t spoil. Gloria is a very knowing, surprisingly touching black comedy about how the working world chews you up, and how the only defense, tragically, is to chew it back, digest and excrete—in blog posts, memoirs and cubicle bitchery.

The camerawork on this shoot is more serviceable than enhancing, mostly a stage-wide frame with few closeups. Ultimately, that’s OK. Tightly and smartly staged by Eric Ting, Gloria is by nature a talky piece, where the mise en scene is less important than the banter and brinksmanship between characters. I honestly wish dialogue on streaming series (saving perhaps Succession and The Marvelous Mrs. Maisel) were this glorious.

Last August, I reviewed the world premiere of  Lydia R. Diamond’s baseball drama at Roundabout Theatre Company, and it was a delight to revisit. Director Pam MacKinnon—who deftly navigates the script’s swerves from monologue to group scenes and then evocative movement sequences—recreates her bravura Roundabout production with a mostly new ensemble. This time around, the title role is played by Dawn Ursula, a vibrant, compelling actress who captures Toni’s mix of deadpan wisdom and naïveté. The other actors—all men playing various races and genders, but principally ball players with the Indianapolis Clowns—are Kenn E. Head and Daniel J. Bryant (from the original production), JaBen Early, Marquis D. Gibson, Rodney Earl Jackson, Jr., Sean-Maurice Lynch, Ray Shell and Jarrod Smith.

The play is narrated by Toni as the story of her life and remarkable career as the first woman in professional baseball. She was the first female player in the Negro Leagues and an outstanding one, at that. As played by the mesmerizing April Matthis in the NYC premiere, Toni came across as a bemused savant, a woman on the spectrum for whom baseball made perfect sense, but human relations were murkier. Ursula retains some of that stiffness, but she has a swagger and moral urgency that is new, and very welcome. Diamond’s play is a fluid, fast-moving account of American sports and race relations in the 1940s and ’50s, in the middle of Jim Crow and before the Civil Rights Era. Negro League team owners were white, and for Black players, the job wasn’t just to hit a home run, it was to shuck and clown for crowds. Athleticism became indistinguishable from minstrelsy, and white crowds were there to howl racist slurs as much as cheer.

Set on modular bleachers (designed by Riccardo Hernandez) under stadium lights (Allen Lee Hughes), with the cast in baseball uniforms (Dede Ayite) and juggling characters with tremendous grace and wit, Toni Stone is a highly polished theatrical treat, a fast ball in your sweet zone. Best of all, the multi-camera shoot gets lots of angles and close-ups to keep the viewing experience lively and focused. Camille A. Brown’s superb choreography mingles iconic baseball stances with grotesque clowning routines that land so hard and go on so long they become—as they must—revolting and shaming for a white audience. The creative team of MacKinnon, Diamond, Brown, the designers and actors—have they got game. 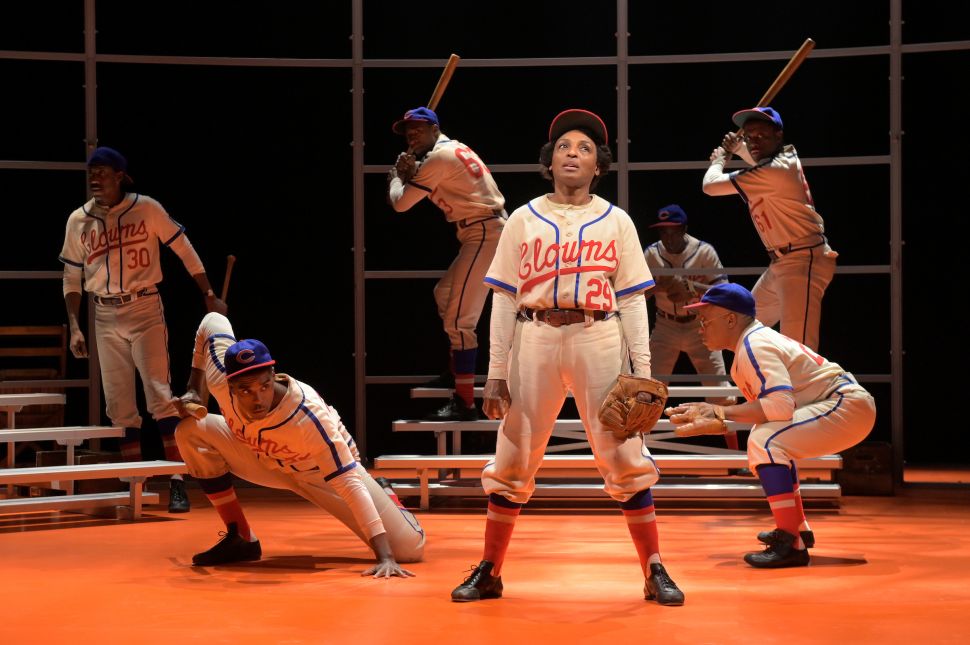