The bad news about 2020 is that one seemingly endless event is overshadowing most media coverage. The good news is that if you can make it to your local bookstore, you can’t choose a disappointing book. Titles that might ordinarily wait for a ceremonial fall publication date have been moved to the first half of 2020 so as to avoid the noise of the presidential election. Autumn’s loss is spring’s gain. There’s terrific fiction for emotional catharsis and escapism. Provocative memoirs and essay collections challenge our notions of gender, sexuality and democracy—making you laugh as often as you are given pause to think. Other nonfiction titles consider history through the lenses of art and friendship as well as justice and race. Don’t misunderstand, though; we’re not saying that you should avoid political coverage. Stay informed, vote and use books as a way to stay committed to civic engagement.

Through humor and quirkiness, Laura Zigman reveals that for every house made uncluttered by Marie Kondo, there’s bound to be someone for whom the effort simply ratchets up their emotional chaos. Judy is a 50-year-old mom who can’t afford to get divorced and wishes her 13-year-old son was as sweet as he used to be. In the midst of this frustration, she begins to wear the family dog in a baby sling. With sharp observations of wellness culture and a keen awareness of real friendship, Separation Anxiety is a straightforward novel in the vein of Laurie Colwin had she moved to Cambridge to take care of family.

Later: My Life at the Edge of the World by Paul Lisicky (March 17)

Continuing the investigation of this country’s social and political failure to respond to the enormity of the AIDS crisis, with his new memoir, Paul Lisicky considers the AIDS crisis and its impact on Provincetown, Massachusetts, a tightly knit gay community, in the 1990s. In keeping with his earlier lyrical and empathetic memoirs, Paul Lisicky chronicles his coming of age as an artist and queer man during the town’s transformation from utopia to dystopia. With deep sensitivity, love, and gravity, Lisicky finds connections both haunting and liberating in this tender and energetic book.

Enter the Aardvark is a blisteringly innovative and outrageous novel about a closeted millennial Republican congressional representative, a Victorian taxidermist and a nocturnal African mammal. Intrigued? If you’re searching for a sharp, looking-glass view into the far end of contemporary politics, look no further. Jessica Anthony’s second novel has the pacing of a thriller with satirical verve of Nathaniel West. Beyond a fabulist send-up of our current political chaos, it’s an examination of the fall out of masculinity’s rigid constraints, played out through sexual repression and relentless power dynamics.

Wow, No Thank You by Samantha Irby (March 31)

From the author of We Are Never Meeting in Real Life and writer for Hulu’s Shrill, Samantha Irby’s hilarious collection of essays takes stock of midlife and the bourgeois dream. Irby’s writing career began with her blog “bitches gotta eat” in 2009, but she’s now a wildly successful author. At 40, she has married and quit her day job at a veterinary clinic, has a garden to tend to and friends in Hollywood. Despite the glamor of writing for television and celebrity friends, she’s still a queer woman of color coping with illness living in a blue city within a red state. Her acerbic perspective is no less raw or raunchy than it was before domestic bliss and fame came calling.

At the center of Afterlife is Antonia, a recently retired literature professor. One of four sisters who immigrated to the United States with their parents from the Dominican Republic, Antonia is mourning the death of her late husband. At the same time, she’s quickly reminded that life doesn’t pause for any of us: she’s consumed with the welfare of her oldest sister as well as an undocumented pregnant teenager who’s made her way to reunite with her boyfriend in Vermont. Julia Alvarez’s first novel in 15 years is deeply empathetic and intimate. Throughout the book, Antonia finds herself searching for language, words, passages, thoughts to guide her. What stuck with me the most was her question: “Let’s see what love can do?”

Currently living in San Francisco, C Pam Zhang was born in Beijing and has lived in thirteen cities across four countries. The soul of a traveler is profoundly evident in her stunning debut novel. With voracious prose, Zhang constructs a portrait of orphaned siblings, aged twelve and eleven, carrying their late father’s body out west during the time of the Gold Rush. Part adventure story, part myth, Zhang searches for a place of belonging for her characters as they conceal their own secrets and grapple with a landscape that’s largely illusion. The immigrant experience is laid bare in this epic story of loss and yearning.

The Book of Anna by Carmen Boullosa (April 14)

Within Leo Tolstoy’s Russian classic Anna Karenina slight mention is made of a book written by his tragic heroine, Anna. Piqued by the idea of Anna’s writing, Carmen Boullosa—Guggenheim Fellow, Mexico City native and Brooklyn resident, author of more than a dozen books—conjures the lasting impact of that fictional book beyond the scope of Tolstoy’s classic novel. This superb translation from Spanish by Samantha Schnee, founding editor of Words Without Borders, is a book of nimble prose that deftly plays with the boundaries between fiction and history. Drawing together servants, diplomats, anarchists, seamstresses and aristocrats at the eve of the Russian Revolution, Boullosa brings heightened eroticism, feminism, and liberation to Tolstoy’s imagined world.

Heaven traces intellectual and emotional research, writing, and observations on gender and bodies through Emerson Whitney’s family history. With statements such as, “I always want to know what’s ‘natural’ about the ‘unnatural’ and all the problematics of that: messiness as perfect too,” Whitney is rigorous with their mind and soul. It’s a book that asks how much of heredity is suggestion while also questioning how anyone can pinpoint the impact of nature or nurture when what you’re examining is a dynamic human being. Through the generational links between mothers and children, Whitney advocates for readers to listen and exercise unconditional acceptance as an act of love.

Having considered the subject for years, Laila Lalami didn’t begin to write Conditional Citizens in any earnest fashion until President Trump attacked Gold Star parents Khizr and Ghazala Khan, who spoke publicly in memory of their late son, Captain Humayum Khan, and against Trump’s proposed Muslim ban. Lalami was enraged by the fact that no matter the sacrifice, certain Muslim individuals aren’t protected or considered true citizens. From this starting point, she examines the complexity of Muslim identity—expressed through race, national origin, gender and class—before finding similarities and differences between Muslim experiences and those of other nonwhites in the United States. It’s sure to be considered as crucial a book about immigration and citizenship as Valeria Luiselli’s Tell Me How It Ends.

The Fixed Stars by Molly Wizenberg (May 12)

From James Beard Award-winning food writer Molly Wizenberg comes The Fixed Stars, a memoir that departs from her usual writing about culinary pursuits. That said, Wizenberg is always circling the self, family, friends, loved ones—everyone with whom you share a drink or meal. At age 36, married and a mother for several years, Wizenberg found that her sexual orientation had shifted. This awareness was the first of many awakenings that lead to a thorough reevaluation of her history and what she thought of as her identity. This is a rigorous and passionate investigation into the real marrow of how we know ourselves and how we weather the changes—desire in identity, in companionship, our needs (small and expansive)—of our lives.

The Equivalents: A Story of Art, Female Friendship, and Liberation in the 1960s by Maggie Doherty (May 19)

In 1960, Mary Ingraham Bunting, the founder of the Radcliffe Institute for Independent Study, recognized that too many promising women undergraduates sidelined their academic or creative careers. Thus, a wholly unique fellowship was created to support the work of “intellectually displaced women” who possessed a doctorate or “the equivalent.” Maggie Doherty draws from primary documents of five of those women—poets Anne Sexton and Maxine Kumin, painter Barbara Swan, sculptor Marianna Pineda, and writer Tillie Olsen—to write The Equivalents. Their work helped forge a path to women’s liberation in the second half of the twentieth century, and this phenomenal book captures the tensions, ambitions, activism, friendship and yearning for community found in this incredible place and time.

Deep Delta Justice: A Black Teen, His Lawyer, and Their Groundbreaking Battle for Civil Rights in the South by Matthew Van Meter (May 19)

After attempting to break up a dispute between four white kids and his two cousins, nineteen-year-old Gary Duncan, an African-American man in small-town Louisiana, was told by one of the white kids that “My people could put you in jail for that.” This was 1966. Duncan was arrested for battery. Defended by 29-year-old Richard Sobol, the only white lawyer in a radical New Orleans law firm, Duncan took his case to the Supreme Court, winning all Americans the right to trial by jury. Matthew Van Meeter dives into great detail through interviews, research and a rich knowledge of the law to reveal the society as well as the men subject to a justice system in need of systemic change.

Observer’s 2020 Spring Arts & Entertainment Preview is your go-to guide for everything culture lovers need to know this season. We’ve combed through the new releases about to drop across TV, movies, dance, opera, theater, the visual arts and literature to bring you our picks for how to occupy your time in the warming months to come. Avid readers should also check out our list of must-see theater and spring’s best museum exhibitions. 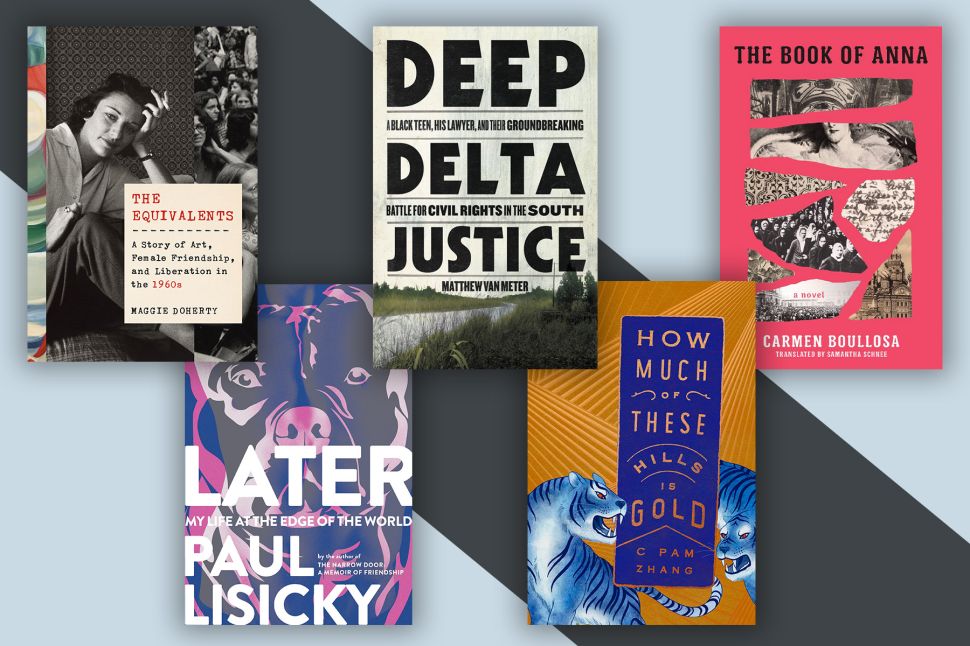