Early Tuesday afternoon, curators lined up outside their exhibition spaces at the Spring/Break Art Show waiting for visitors to appear. Usually by this time of the day, the space would be billowing with the sound of collectors and press. This year, silence filled the halls and a faint scent of purell wafted through the building. Was the coronavirus affecting fair turn out?

With the day’s rain and last year’s iteration being something of a bust, that answer may prove a bit allusive. Multiple factors always affect attendance. Certainly, though, fears of the spreading virus dominated conversations and I spent the majority of day negotiating appropriate handshakes. I did this while simultaneously trying out a variety of art experience chambers all but certain to spread the plague. My art experiences included the use of communal beds, salt floors, and swinging chairs to name just a few of the potentially life altering hazards. I did that for you, dear readers, because art is important. (Also, I’m not going to die.)

I consider my efforts worth it. This year’s edition, which includes more than 125 curator-led exhibitions spread over two floors of the old offices of Ralph Lauren, showcases a vast array of playful, fun art. Cats abound, dicks flourish, and sci-fi references emerge from nearly every corner. This flavor of art feels a little at odds with the show’s grim theme of excess, which organizers Ambre Kelly and Andrew Gori describe as timely given the weight billionaires have on elections.

I can’t speak for anyone else, but I personally found this disconnect a blessing. The political and media landscape is hellish enough without having it reflected back at us through art. The experimentation Spring/Break encourages through low booth costs led to other artistic and aesthetic approaches—like makeshift art environments often built at the last minute (the fair settled on its location mere weeks before it opened), a bizarre affinity for a burlesque meets drag queen boudoir aesthetic, and the wholly inexplicable trend of screens, bolts of fabric and hanging art. The low barrier to entry also attracts more exhibitors showing experimental technology-focused art than at the Armory and the Independent (both open to the public this week).

By late afternoon, the fair crowds thickened and risk-adverse collectors like Laura Lee Brown of 21c Hotels and Carol Cole, a stalwart in the North Carolina community, were spotted walking through the fair. I view this as a sign of success. As a community-led art fair that privileges participation and willingness to fail over slick presentations and blue chip art for zillionaires, it attracts big names even when faced with global pandemics. I consider it a privilege to visit. Some highlights below.

Jeila Gueramian’s sprawling forts made out of crocheted blankets and repurposed bolts of fabric draw on nostalgia and millennial slang. By transforming the former Ralph Lauren lobby into the home of a party fort filled with flat screens adorned with pictorial landscapes drawn from beer ads, the piece sets the vibe for the show. Inside, a hanging disco ball perched above a swinging chair gives viewers a chance to rest briefly. Very fun.

Almost all the art in this exhibition, titled “Metacognition,” looks like it was run through a computer. Robin Kang’s woven tapestries evoke mythic symbolism as well as computer chips. LoVid’ hanging silken fabric resembles a computer screen after it’s been hacked. An interest in contrariness unites the artists in the show, whose work often combines opposition characteristics—the spiritual and the algorithmic, the scientific with the poetic, the mathematical and the biological. Metacognition offers the yin and yang of Spring/Break.

Speaking of contrasting materials, artists Faith Holland and Natalie Baxter both produced plush toys to contrast qualities of the objects they render. In the case of Holland, those items included not just the computers and keyboards she transformed into soft sculptures, but an array of looping animated erect dicks. Meanwhile, Baxter transformed handguns and assault rifles into stuffed toys as a means of neutering their violent potential. Each challenges the gendered association with the original objects, inserting a healthy dose of feminism into male dominated subject matter.

Can machines create a world devoid of human compassion? This question centers Tansy Xiao’s two person exhibition, which includes a series of warbly metal sheets moved by the force of a fan by Sizhu Li, and giant sphere of lights by Michael A. Robinson. The latter work will likely attract the most attention for spectacle alone. Made from found lamps and tripods and suspended from the ceiling with microfilament, this octopus-like ball of light looks like it was beamed off the set of The Matrix and into the fair’s offices. The surreal flavor to the piece tends to inspire imagined origin narratives—I decided the unadorned mass of electrical cords pointed to a burgeoning reality where simple pleasures had been replaced for utilitarian structures. A friend spent a lot of time discussing its relationship to the Borg. Despite a rather optimistic title, The Origin of Ideas, the work tends to evoke bleak thoughts.

Salt, gingerbread, and a whole bunch of paintings make up Super Future Kid’s gated playground. Most of the paintings include cats falling from the sky, off houses, and out of  projectile rainbow vomit. The artist adorns the walls with rolling hills made from ice cream and sprinkles. This might be one of the few works in the show that near religiously adheres to the theme of excess.

GALLERY’s makeshift anti-gravity chamber achieved no anti-gravity, but still ranks as one of the more successful efforts. The booth isn’t anything more than a bed, but after six hours at the fair, I really needed a break. Beyond that, though, Nathan Sinai Rayman, the artist behind GALLERY, makes the piece through his consummate skills as a salesman. Rather than selling the experience, Rayman sells franchise kits so that others can launch their own GALLERY in towns and spaces of their choosing. The kit comes with a brick and mortar space that can be assembled, disassembled and stored. No art included. (In other words, the bed isn’t for sale.)

Before entering the chamber, Rayman explained that he assembled the kit to house a specially designed bed he claims NASA uses to simulate the loss of gravity. I wasn’t able to verify this claim, but I’m not sure it matters. Putting your feet up after a long day feels great no matter what the backstory. 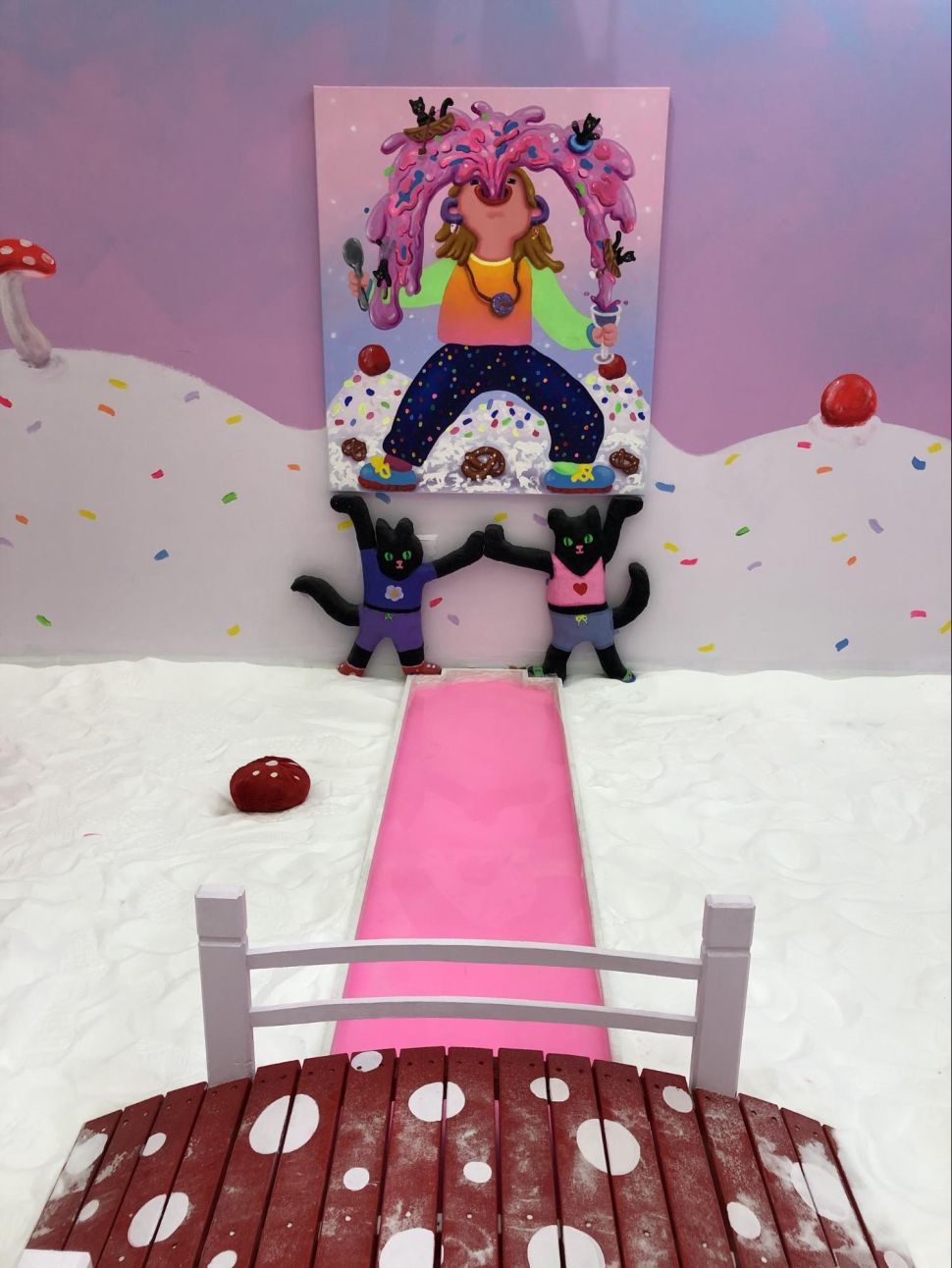