When working with a genre as dated as opera, the most important thing an artist can do is experiment. The old guard of classical music often struggles with relevance, meaning the future of opera heavily relies on its burgeoning indie scene. These artist-driven groups are prioritizing accessibility and produce operas in neighborhoods that are historically underserved. They invest in young singers and living composers to launch new works. They reimagine the classics as political commentary.

The risk takers of the indie world have forced the establishment to take more chances, invest in diverse talent and engage directly with social issues. It’s sometimes (but only sometimes) evident in The Met’s productions and LA Opera’s ethics.

Whether new to opera or not, this spring’s lineup of traditional and indie performances are a fresh take on what the genre could be and where it should be going.

The Industry is one of the most important opera companies right now. They’ve been called the “coolest opera company in the world” and while that’s a great endorsement, the artist-driven team is delivering more than just performances inside a fleet of cars driving around LA. (Though, again, that is pretty cool.) The Industry stands apart not just for expanding the definition of opera but expanding the community it reaches. The disruptive vision of artistic director Yuval Sharon showcases a dialogue from artists often neglected by the big-name opera companies, making it a great hangout for discovering new writers and musicians.

Sweet Land will claim its stage in LA State Historic Park and is conceptualized as “an opera that erases itself.” Composer Du Yun worked alongside librettists Aja Couchois Duncan and Douglas Kearney to communicate stories of indigenous people of the 21st century and challenge a whitewashed American identity.

Sure, “newness” doesn’t come to mind when considering a Wagner opera at the Met, but François Girard is unveiling a new vision of the 177-year-old classic. With sets from John Mcfarlane that promise to bring oil paintings to life in bold, eerie visuals, the story of the cursed Flying Dutchman gets a deservingly new flightpath.

The Met gives us another taste of change in casting Soprano Anja Kampe, who will be making her Met debut as the hopelessly devoted Senta. Valery Gergiev conducts the cast led by bass-baritone Evgeny Nikitin in the title role and Sergey Skorokhodov in the role of Erik, Senta’s deserted ex-lover. Whether seeking the lavishness of the Met or an over-the-top production, Girard’s redeems Der Fliegende Holländer for its drearier iterations by breathing life into an opera about, well, redemption.

Beth Morrison is one of opera’s group of great risk takers who have stretched the definition of the medium to new limits. By working with living composers and casting emerging artists, she’s become a sought-after tastemaker.

Her tour of Home lands in Los Angeles on March 4 and offers an eclectic show that isn’t quite opera but uses the genre to experiment with silence and sound. The sometimes wordless performance, which explores shifting concepts of community amidst the housing crisis, will lean on dance, illusion and audience participation when words fail. But expect to hear original music from Elvis Perkins and vocals from The Crossing in its louder moments. The multimedia production doubles down on visual performance at a time when indie opera shows tend to be pared down from budget constraints, but given Morrison’s history of forecasting, this could become the norm.

“Singers are storytellers, but rarely do we get the opportunity to help create the stories we are telling,” soprano Roberta Gumbel said of having written the libretto for DWB (Driving While Black). Gumbel worked with composer Susan Kander to write the score for a chamber opera that speaks directly to the racial targeting of black teenagers.

Directed by Chip Miller, the family drama centers on a parent stricken with anxiety when their son approaches legal driving age. The emotional piece explores and the ways in which children of color are depicted as threats and asks why typical milestones can’t always be celebrated in black households. The cello/percussion duo New Morse Code will accompany the New York premiere at the Baruch Performing Arts Center.

Mending Wall is another great example of emerging opera stars bending the rules with what opera can do. Prism Quartet tapped Jorinde Keesmaat and soprano Tony Arnold to link four major works by the composers Arturo O’Farrill, George Lewis, Juri Seo and Martin Bresnick to make music inspired by four poets. Each composer was given a single prompt: chose a poem to represent their own experience of living behind walls.

O’Farrill happens to be an activist from Mexico known for Fandango at the Wall, where he assembled 50 artists at the Tijuana-San Diego border to record an album. His selected poem, “Freefalling Toward a Borderless Future” by Guillermo Gomez-Peña, is incorporated into his score for “Something to Declare? (yeah, fuck your wall)”. Composers also leverage the voices of South African poet/activist Keorapetse Kgositsile, Brazilian writer Salomão and the titular work from Robert Frost, who explored a wall as paradox. The result is a fluid narrative of how borders challenge human connection, told by both the composers and poets who know the feeling.

Beyond experiments, indie opera’s willingness to collaborate across genres is breathing life into the art form. Experiments in Opera has been a staple of the offbeat theater world for nearly a decade, keeping opera weird and rowdy the way Mozart intended. It was a brilliant choice to take on the improvisations of jazz great Anthony Braxton, but to sprinkle in improv comedy? It’s risky to throw all of those acquired tastes onto one stage, but EiO’s experiments tend to work.

While Braxton’s 100+ albums have solidified him as a pioneer in free jazz since the 1960s, he has composed three opera cycles that include his signature style of music notation and cryptic messaging. Drawing on that legacy, musical improvisers will infuse his music with improv comedy techniques. Rob Reese directs the latest experiment, but expect a new set of musicians each night to keep the production truly fresh. Vocalists Kamala Sankaram and Elizabeth Saunders, trumpeter Nate Wooley, saxophonist Ingrid Laubrock and Jessica Pavone on strings are all confirmed artists, for now. At this rate anything is up for improvisation.

It’s Puccini’s greatest opera (not everyone thinks so but it’s true) and starring none other than Anna Netrebko, the most recognizable living prima donna of the opera world. It’s a near fool-proof combination that sees opera in its highest form.

Netrebko, who is no stranger to controversy for costuming as Madama Butterfly’s Cio Cio San and playing the titular role of an Ethiopian slave in Aida, was showered in praise when she sang the role of Tosca in 2018, which is way more in her lane. For better or worse, Netrebko has a page in the history books and Tosca is a jewel in her crown. For anyone looking to experience opera at its quintessence, there will be few other dramatic experiences like it.

Pacific Opera Company has operated since 2011 with a clear mission of bringing opera to a wider audience through accessibility and affordability. That ethos has led them to produce work in areas with historically limited exposure to opera and cast performers of different backgrounds so that audiences are better represented on stage. Their strategy has not only built a burgeoning opera community on the west coast but has launched several opera careers.

This season POP is taking on Mozart’s Così fan tutte with an updated sense of humor. Josh Shaw directs the modern take on Wolfie’s opera about fiance swapping and does so with a cast that can not only handle the notoriously difficult aria “Come scoglio” but has the comedic timing to make it just as risqué as when prude Austrians called the piece immoral.

Each year, Heartbeat Opera grows into its purpose. The indie company first known for its decadent opera drag shows continues to build new narratives with old arias, creating some of the most poignant storytelling mixed with over-the-top parties. It’s one of the few indie companies that never sacrifices elaborate production design and it’s the company least afraid to tackle political issues, even (and especially) when the issues lie within the opera industry.

Lady M is Heartbeat’s own version of Verdi’s Macbeth, but a pared-down version that focuses on the experience of Lady Macbeth. Directed and adapted by Co-Artistic Director Ethan Heard, this modern lens unpacks the cliche of the ambitious woman while exploring the ways in which present-day wealth corrupts.

Whereas many indie companies are adding new takes to old classics, Fresh Squeezed invests in entirely new works, giving living composers a platform to continue the genre’s legacy. That also means that these fully staged works are often premieres to what could be the next big thing.

Self Define Circuits may very well be that. Composer Jillian Flexner and librettist Orlando Segarra tell the story of Fembot, a brand new sex robot trying to define womanhood while trapped inside a program created by this guy Pete and his “Siri” device, Cora. The piece explores what self-identity could mean to artificial intelligence and the philosophical dilemma of someone trapped in another person’s world.

Observer’s 2020 Spring Arts & Entertainment Preview is your go-to guide for everything culture lovers need to know this season. We’ve combed through the new releases about to drop across TV, movies, dance, opera, theater, the visual arts and literature to bring you our picks for how to occupy your time in the warming months to come. Opera fanatics should also check out our list of the must-see dance coming this season and spring’s best new reads. 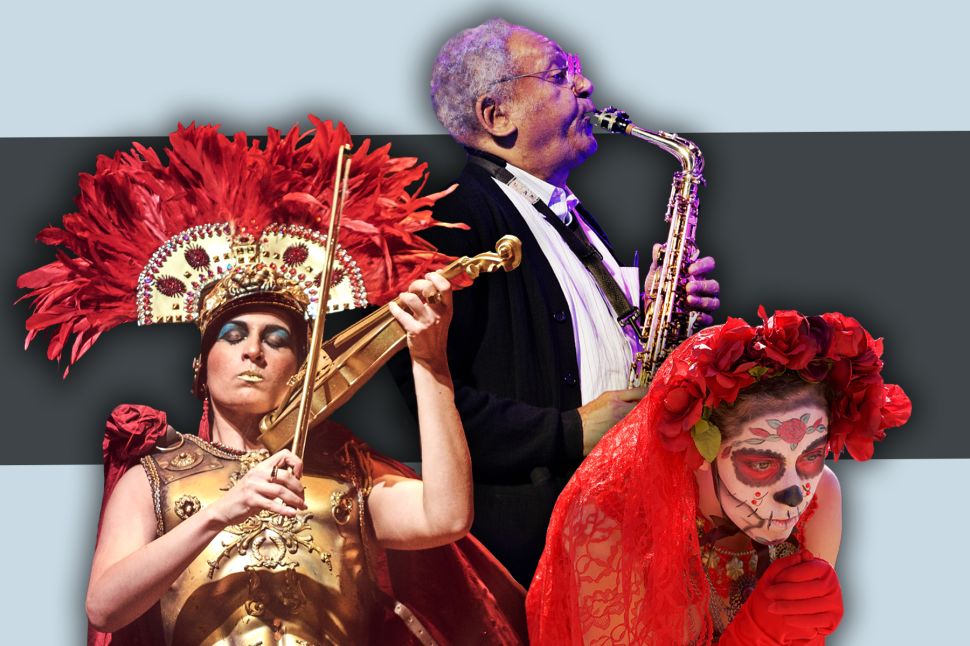