As art fairs in New York compete to find the next market wonder, the European Fine Art Fair (TEFAF) in the Dutch city of Maastricht will offer an incandescent scene of three ballerinas, Three Dancers in Yellow Skirts, ca. 1891, by Edgar Degas. Once the property of the oil tycoon Armand Hammer, and offered by Hammer Galleries of New York, it is priced to break that artist’s sale record of $37 million—a staggering amount for any work at any art fair.

Also on view at TEFAF—and for sale—is an 1885 painting by Vincent van Gogh, Peasant Woman in front of a Farmhouse, offered by Dickinson, a London gallery, which has its own legend. It was bought in a London antique store in 1968 for 45 pounds.

Some 275 dealers from 20 countries are exhibiting at TEFAF (March 7 to 15), minus those who cancelled over coronavirus fears. The fair has broadened in recent years to include design and contemporary art, and into spring and fall editions in New York. Still, at its core are antiquities and especially Old Master paintings and drawings—loosely defined as dating from around 1400 to 1800.

With its rigorous vetting of provenance, condition and attribution, TEFAF is seen by many as the gold standard for art fairs, and not just because so much jewelry is offered at such high prices by mainstays like Van Cleef & Arpels and Hemmerle. 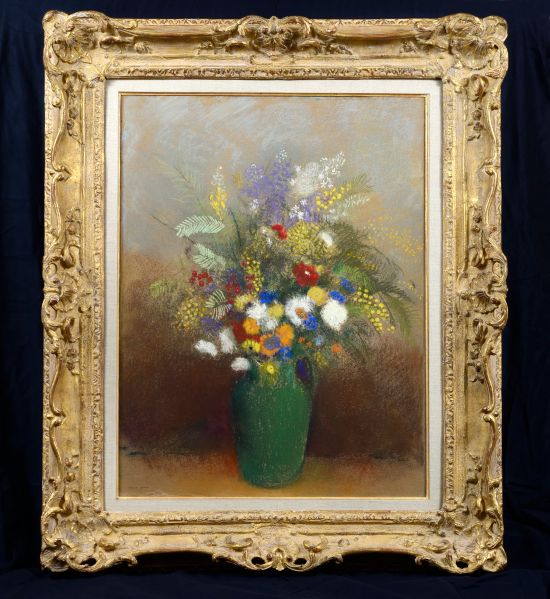 But there’s another story in Maastricht and beyond, as contemporary prices tend to soar above everything else. Old Masters and other historical art—pre-contemporary, some call it now—seem affordable by comparison to contemporary works. Just be advised that affordable doesn’t necessarily mean cheap.

“These things, while they may be in the very low seven figures, and often in the low to high six figures—it’s like pocket change for collectors in certain areas of contemporary art,” he explained, “where it’s nothing for a picture to be one year $30,000, and then the next year it’s $300,000. After that it’s a whole bunch of collectors vying at $6 to 8 million, and then it’s $20 million.”

Flying consistently at a much lower altitude with venerable work—call it the revenge of the nerds—Tunick says last year’s business was his gallery’s best.

This year at TEFAF Tunick has two landscape drawings by Gustav Courbet. “They’re among the rarest of the rare, one from the 1840s and one from the 1850s. They’re a remarkable opportunity for a curator or serious collector, because they just don’t appear on the market,” he said.

With a seascape painting by Courbet, The Wave, 1869-70, expected to bring nearly $2 million at TEFAF, those are relatively affordable prices. Tunick is also offering a pastel of flowers (on board) by the French symbolist Odilon Redon. “We think it may be the finest Redon left in private hands, really quite affordable, if you’re using contemporary art as a measure,” he said.

By that measure, Old Master drawings and other works on paper represent value and quality for money in the art market today, says George Goldner, the former head of drawings at the Metropolitan Museum.

“Take the print market—you can make nice collections of Rembrandt prints, or Durer prints, two of the very best artists ever, or Goya prints, and it will cost you a fraction of what one good contemporary piece would cost,” he said.

Goldner admitted that today’s collectors—in the US at least—might take some convincing. “It’s the first time in history when similitude is regarded as a positive,” he said. “If you collected Old Master paintings, and someone said, ‘your Rubens looks exactly like my Rubens,’ that wouldn’t be a good thing.”

“In contemporary art, the fact that your Warhol and mine look exactly the same is a positive.  It allows people to buy art the way that they buy a Gucci loafer. You just look at the buckle, there it is, and you don’t have to judge whether the quality of the shoe is good or not. It comes with a universal endorsement,” he said.

For the journalist and market watcher Paul Jeromack, “Now is the time for people, if they have money, to collect. There are a lot of unfashionable eras, like French 18th century drawings. People want the big names, like Watteau and Boucher, but you can buy beautiful drawings for under $10,000 now, certainly for under $15,000.”

Or less, if you take the case of the art historian and dealer Robert Simon, whose partner bid $1,000 by telephone to an obscure auction house in Louisiana in 2005, and purchased a painting that turned out to be Leonardo da Vinci’s Salvator Mundi. The picture eventually sold for $450 million.

Simon, monitoring this year’s TEFAF from New York, stressed that hitting the jackpot doesn’t make it any easier to sell paintings from centuries ago to new collectors raised on Koons (even though Jeff Koons himself collects Old Master paintings and drawings).

“It’s a limited audience,” he said. “Some people aren’t focused on old things, period. We’re in a very contemporary-driven world. But it’s also that some people don’t understand it, they’re not familiar with it.”