You know them as the redheaded superhero and the vibranium android, but Wanda Maximoff and Vision of the Marvel Cinematic Universe are about to become your favorite local suburbanites. “Vision residence,” says Wanda into a landline telephone in recently released footage from the new series WandaVision, where it appears the science-fictional has taken a turn for the black and white. Unfortunately, production on the show, along with several over Marvel Cinematic Universe productions, was recently put on hold this weekend due to concerns over the novel coronavirus, also known as Covid-19. Here are the most important details we know so far about the upcoming, six-episode Disney+ miniseries.

How will WandaVision fit into the Avengers movies and Marvel Cinematic Universe?

Produced by Marvel Studios, WandaVision is a sequel to Avengers: Endgame, and its plot will tie into the plot of the upcoming film Doctor Strange in the Multiverse of Madness, which is expected to be released in May 2021. WandaVision will be released alongside Loki, an upcoming series that will feature the eponymous comic book villain.

SEE ALSO: HBO Is Turning ‘The Last of Us’ Into a TV Show. Here’s What We Know So Far. 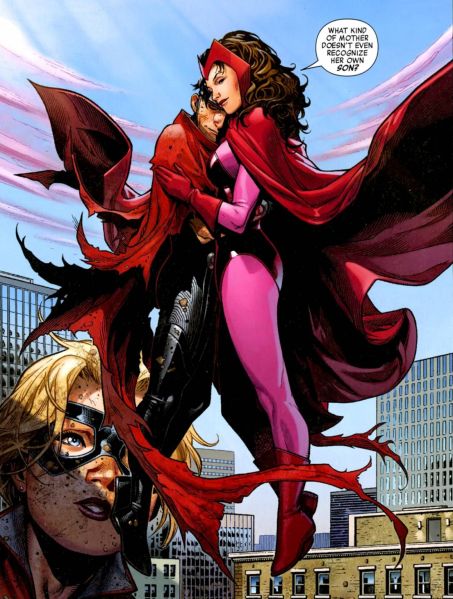 What is the new series about?

In Avengers: Infinity War, Vision was killed when supervillain Thanos tore a magic gem called the Mind Stone from his head as part of his goal of collecting the six Infinity Stones. Wanda, Vision’s lover, was unable to save him. How exactly the dead robot and his superhero girlfriend wound up in a 1950s-style universe is yet to be determined. It could feasibly take inspiration from the Tom King comic series Vision, which imagines the robot in a nuclear family, or from House of M, a series written by Brian Michael Bendis in which Wanda uses her powers to rewrite reality, but none of that has been confirmed yet. Also still in question is how Wanda became known as the Scarlet Witch within the MCU.

Marvel Studios president Kevin Feige spoke about the show in an interview. “Having the opportunity to tell more of their story, to see more of what Wanda can do, more of what makes Vision Vision, and—most importantly—reveal a name that I’m not even sure we’ve said in the MCU yet, but we absolutely make a big deal of in the show, which is that Wanda is in fact the Scarlet Witch,” he said.

Who’s behind the series?

WandaVision’s head writer is Jac Schaeffer, who is also writing the upcoming MCU movie Back Widow. The show is directed by Matt Shakman, and the cinematographer is Jess Hall. The production designer is Mark Worthington and composing the music will be Christophe Beck.

Who’s in the cast?

Expect to see Elizabeth Olsen and Paul Bettany continue to play Wanda and Vision as they have in Avengers and Captain America movies. Other MCU characters are also featured in the cast, including Randall Park as secret agent Jimmy Woo, Teyonah Parris as Monica Rambeau of Captain Marvel and Kat Dennings as Darcy Lewis of Thor. It’s rumored that Wanda’s “nosy neighbor” Agnes Harkness will be played by Emmy-nominated actress Kathryn Hahn. Also expect to see Josh Stamberg as a character yet to be revealed.

Do we have a release date for WandaVision yet?

WandaVision has recently wrapped up filming in Atlanta, Georgia. Parts of the show were filmed in front of a live-studio audience. While no hard date had been set yet, WandaVision was scheduled to be released in December 2020, exclusively on Disney+, shortly before Loki. We don’t yet know how long the coronavirus-related production delay will last or how it will ultimately affect Marvel’s overall release schedule among its other shows, but we hope to see suburban magic adventures soon once production gets back on track.