Warhol, by Blake Gopnik, begins moments after the militant feminist and Factory hanger-on Valerie Solanas shot the artist in June 1968. Warhol, then 39, lost his heartbeat and a lot of blood, and had gone into cardiac arrest. A bullet that passed through his body punctured a lung. It was thanks to an Italian surgeon who happened to be visiting another patient that the presumed DOA was saved.

Gopnik’s staggering description of opening up the Warhol’s chest reads more like a slaughterhouse dismemberment than anything medical.

For Andy Warhol (1928-87), who attended church every week, coming out alive was a miracle. By that fall, despite painful permanent damage to his stomach and esophagus, he turned the slashes on his body into a fashion joke—“I’m so scarred I look like a Dior dress,” he said upon returning to work. Richard Avedon photographed his lacerated midriff as if Warhol were St. Sebastian—a martyr who survived.

The surgeon who knew Warhol’s insides best tired of the artist’s indifferent shrug toward the outside world. After six months of watching his bill go ignored, he wrote to his patient: “PAY UP YOU BLOWHARD.”

The near-death post-shooting hospital room drama that opens Warhol is the overture to Gopnik’s 976-page saga that is by turns gossipy, informative, exhaustive and reflective.

Get ready for the jokes that the biography will take you more than 15 minutes to read, or that it may feel shorter than Sleep, Warhol’s eight-hour 1963 documentary of the poet John Giorno in slumber. Note that almost 800 pages of footnotes are online.

It takes a book of this size to evaluate the mountain of unreliable information published by people in Warhol’s circles, and by Warhol himself. Gopnik, a good storyteller, has also been able to separate the accurate gossip from legend that’s become the conventional wisdom.

Unfortunately, the huge book, illustrated with stark black and white photographs of Warhol, has only eleven color images of his art

The challenge for anyone who wants to do more than get the facts straight is addressing Warhol’s credibility as an artist. Back in 1962, when Warhol’s Campbell’s  Soup cans premiered—in Los Angeles, not in New York—a critic decreed that “Warhole,” as he spelled the name, was “either a soft-headed fool or a hardheaded charlatan.”

Gopnik, a Warhol admirer, defends him as an intellectual who read widely, even with the television on all the time when he worked. He was also a technophile. Who knew? In the early uneasy years of Pop Art, he made most of his money on commercial illustration. Shoes were his specialty.

In his youth in Pittsburgh, where his Rusyn parents had immigrated from what is now Slovakia, Andrew Warhola never ate Campbell’s Soup—too expensive for the family that boiled cabbage at home. (His mother would make that same soup for Andy and his scruffy friends in New York.) Warhol attended art classes with rich kids at the Carnegie Museum. He also graduated from the rigorous art program at Carnegie Tech. The figurative painter Philip Pearlstein, fresh from World War II, was a classmate.

A parallel education came from dressing windows in Pittsburgh’s department stores, where where his bosses were gay and formed an aesthetic cognoscenti. Gopnik’s book gathers steam as an archaeology of gay Pittsburgh when Warhol came of age and follows him as he discovers the gay New York of the 1950s, with quiet (by day) landmarks that have long since disappeared. The biography’s deep dive into queer history could help take Warhol beyond its natural art audience, which helps a book that’s being launched during a pandemic.

Two other artists were also dressing shop windows on Fifth Avenue at the time—Jasper Johns and Robert Rauschenberg. It won’t be giving too much away to say that Gopnik believes he found the origins of Pop Art in those windows. That story deserves a book in itself.

Andy Warhol, famously monosyllabic—an act, Gopnik says—claimed he exhibited Brillo Boxes rather than paint something new, because “it’s easier.” Other voices fill out the story. The dealer Ivan Karp, who showed and sold those boxes, talked non-stop at the time about taking them to the public. We also hear from people like the documentary filmmaker Emile de Antonio (Point of Order, Milhous), who watched the ever-ambitious Warhol struggle to shift away from painting toward film in the late 1960s. The economics never really worked, given the films that Warhol wanted to make.

But notoriety did work. After Warhol was shot, his market was anything but gravely injured.

Upon hearing of the shooting, Gopnik reports, the curator Henry Geldzahler told a friend, “Do you know what that does to the values of the paintings? Don’t ever tell anyone I said that.”

Time has proven him right. Gopnik notes that a dealer compared Warhol’s works to a commodity, and said that buyers acquired them as if they were corporate stock, even if they didn’t like them.

Warhol, with a white wig and pale splotchy skin, didn’t like the way he looked. A steady diet of amphetamines kept his weight down. Yet he labored to make his name and his face an icon of ever-expanding value. Was it the result of talent or self-promotion? It was always a bit of both. 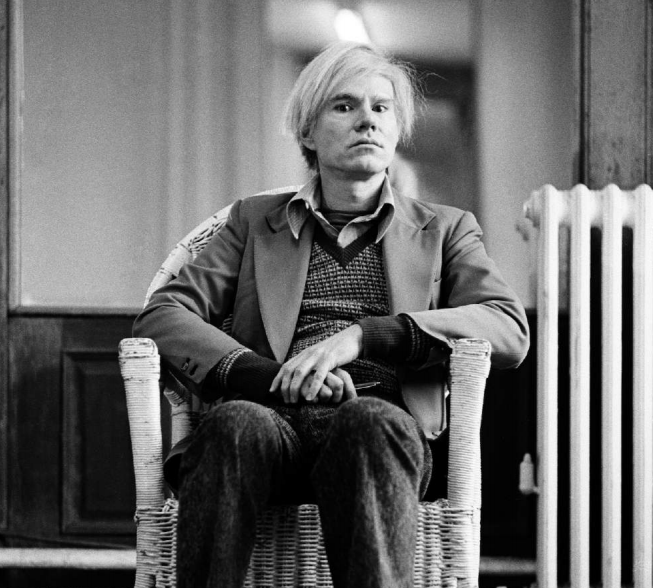