Streamed theater can never be a total success. How can it? Zoom-based plays, operas or dances are doomed to failure like any representational art—but doubly so. Unlike theater or cinema, where a darkened auditorium and attentive crowd contribute to a sense of dreaming and connection, watching a play on computer encourages a fidgety, let-me-pause distance—in mind, body, and emotions. Nevertheless, I leaned in to my laptop, hungrily, for What Do We Need to Talk About?, writer-director Richard Nelson’s brief but heart-tugging postscript to his Apple Family Plays, which debuted at the Public Theater from 2010-13. For an hour, we were allowed to politely Zoom-bomb a virtual family confab: middle-aged siblings and an in-law catching up during the pandemic. Using available technology wisely, the piece works beautifully. The level of artifice is both pervasive and invisible: It’s just five people in a Zoom, measuring in jokes, jibes, and silences the terrible gulf yawning between them.

Nelson’s stylistic approach in the Apple plays (and the subsequent Gabriel and Michael family cycles) is low-key, living-room naturalism. Folks gather in a kitchen, they cook, drink, talk, and eventually leave the room. The plays usually took place on a politically charged day—the tenth anniversary of September 11 or Election Day 2012—and the conversation often veered from family matters to issues of national importance. The effect was eavesdropping on thoughts you were already having, but gracefully shaped by Nelson and warmly articulated by some of New York’s finest character actors.

Those marvelous troupers are back, on Zoom, through Sunday only. They include Jay O. Sanders as Richard Apple, a lawyer who works in Albany for Governor Cuomo; his sisters Barbara (Maryann Plunkett) and Marian (Laila Robins), both schoolteachers upstate in Rhinebeck; and youngest sister, Jane (Sally Murphy), a writer married to former actor Tim (Stephen Kunken), who had been managing a restaurant, also in Rhinebeck.

The Albany-based Richard has been living with Barbara, who just got out of the hospital after a brush with the coronavirus. Tim is symptomatic, so the germophobic Jane has banished him to a separate room. Over the course of an hour we learn that Richard is thinking about retirement. Marian, caustic and tight-lipped, is dealing with the pandemic in her own sardonic way, vowing to put on a gorgeous evening dress to take out the garbage. Barbara’s substitute has been teaching (remotely) Boccaccio’s Decameron, that plague-era classic about the use of narrative to pass bad times. This leads naturally to each family member telling stories when their personal narratives become too painful. There’s no plot, just an easy flow of affection and news. The raw, unguarded humanness takes your breath away. The piece begins and ends with Plunkett staring into the screen before and after the Zoom meeting, clouds of feeling passing over her pale, open face: fear, hope, worry. And the numbness we fear will never go away.

I started this review pooh-poohing the idea of success, but there have been damned entertaining experiments since we all became techno hermits. Composer Kamala Sankaram and librettist Rob Handel found quirky, operatic dazzle in the collective unconscious of an absurdist Zoom meeting. The obscenely watchable Michael Urie held about 70,000 people spellbound for his reprise of Jonathan Tolins solo comedy, Buyer and Cellar. Stephen Sondheim’s soul-restoring 90th birthday celebration, which climaxed with a “Ladies Who Lunch” cocktail Zoom with Christine Baranski, Audra McDonald and Meryl Streep, was worth a year of therapy. Each week, 24 Hour Plays churns out Viral Monologues, yummy theatrical finger food (full disclosure: I co-wrote one recently). And now Richard Nelson shows how a thoughtful script and superb actors can make an hour of online drama that is touching, funny, and deeply satisfying.

After all, why go to theater, and why do we long to return? We like seeing bodies move in space, bodies in dialogue, talking. Maybe they talk in sparse fragments, or in grand, cosmic rhetoric. We hunger for dense words and songs arranged, designed, and performed through the infinitely complex technology known as reality. Without lies or clichés, Nelson and his actors welcomed us into a kind of room that felt real. It was real. I’d like to go back. 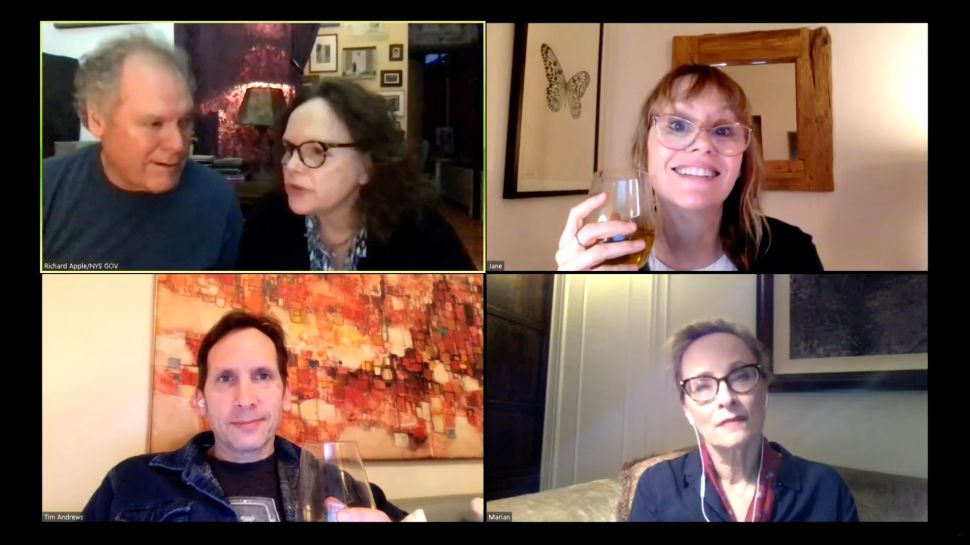