Stealthy, anonymous graffiti artists are stuck inside during quarantine too, which means that Banksy has probably been prevented from practicing his favorite methods of art-making lately. The elusive artist, who’s recently been in the news because of the theft of one of his rat stencil drawings from the parking lot of the Centre Pompidou in Paris, took to Instagram on Wednesday to share his latest creation: a dingy and semi-destroyed bathroom covered in drawings of the same types of rats. The artist cheekily captioned the post “My wife hates it when I work from home,” but due to the nature of his signature anonymity, it’s unclear whether Banksy is actually married or if he’s just cracking a joke.

Banksy’s immense global popularity has always been somewhat impossible to explain, especially because the artist tends to re-use the same tactic of pranking people with his “edgy” creations over and over again. Like with much of his other work, there’s nothing particularly visually appealing about the rat-infested bathroom Banksy has imagined here. Instead, you’re left with a mild sense of admiration for the technical execution of the idea and not much else. A rat drawing made to look like it’s running in place on top of a roll of toilet paper: cute! A rat drawing made to look like it’s spattering a toilet bowl with foul-looking liquid: not so cute.

Of course, none of this criticism will matter to the millions of fans who follow the artist on Instagram, or to the wealthy collectors willing to shell out astonishing sums for Banksy-made renderings of Rembrandt with googly eyes stuck on them. But while some artists are using their platforms to offer words of encouragement or entertaining theories while everyone is self-isolating from the coronavirus, Banksy appears to be doing the same thing he’s always done, which is, artistically speaking, the bare minimum. 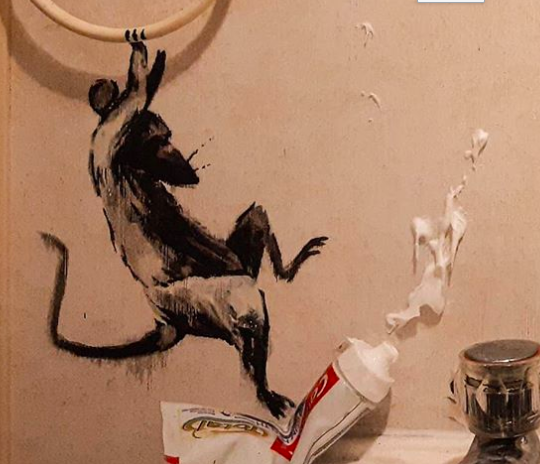