Forty-five minutes into the new Beastie Boys documentary, Adam Horovitz—better known as Ad-Rock—sheepishly recites some lyrics from “Girls,” an unabashedly misogynistic anthem from his group’s first album, Licensed to Ill: “Girls to do the dishes / Girls to clean up my room / Girls to do my laundry.”

The crowd in front of him laughs, but Horovitz, now in his early 50s, looks more like a disapproving dad. He lets out a long, pained sigh and rolls his eyes, like an adult confronting some stupid thing they wrote in their high school yearbook. The song “was supposed to be this stupid and ironic joke,” Horovitz explains, “but understandably it wasn’t that funny.”

Beastie Boys Story, Spike Jonze’s documentary tribute to the erstwhile rap trio of the same name (out Friday via Apple TV+), is full of moments where the two surviving Beastie Boys, Horovitz and Michael “Mike D” Diamond, talk about career accomplishments they’re proud of. That list includes the rap-rock juggernaut “Sabotage” (“All that came from Yauch, just playing a bass line!”), the Tibetan Freedom Concert, and the sample-heavy 1989 masterpiece Paul’s Boutique (which, as the band acknowledges in a self-deprecating segment illustrating the gulf between expectations and reality, didn’t sell).

But Jonze’s film is most interesting when Horovitz and Diamond confront things they’re now embarrassed by. And since the two spend the first hour recounting their rise from amateur punks to amateur white rappers to MTV-endorsed hip-hop hooligans with a No. 1 album to their credit, there’s plenty to be embarrassed by. Like “Girls,” or even “Fight for Your Right,” the sneering party anthem that catapulted them to fratboy fame but attracted some wildly obnoxious fans in the process. (As for the infamous gigantic hydraulic penis from their first headlining tour? That was merely a joke suggestion that the group’s tour planners took a little too seriously, Horovitz explains.)

The film feels like a live reckoning with the band’s moral and feminist awakening: How did these guys go from wanting to name their debut album Don’t Be a Faggot (their label balked) to raising international awareness for the cause of Tibetan independence in just 10 years? The storytelling consists of footage from Horovitz and Diamond’s two-man show at Kings Theatre in Brooklyn, interspersed with choice archival clips from their glory days. It’s an odd format for a rockumentary: At times it feels like watching a YouTube video of a TED Talk, where the punchlines and stage gags don’t always translate to video. (Given the communal joy of the Beastie Boys’ music, it’s a shame the coronavirus pandemic has stymied plans for an IMAX theatrical release.)

But the two surviving Beasties are funny and charismatic hosts—whether doing their best Rick Rubin impression or clowning on Ad-Rock’s film debut—which makes it easy to forgive this film’s structural limitations. Plus, they spin a genuinely moving yarn about how three eternal pranksters found each other and then found enlightenment, before cancer cut the party short.

Undeniably, casual sexism was de rigueur during the Beasties’ snotty early years. One surprising revelation from Beastie Boys Story is that Horovitz still harbors guilt regarding the ousting of founding member Kate Schellenbach, a casualty of the band’s Rick Rubin-aided transition from hardcore to hip-hop. Schellenbach was pushed out “because she didn’t fit into our new, tough rapper-guy identity,” Horovitz explains. “Now how fucked up is that?” Later, he spotted his ex-bandmate at a deli and didn’t say hi.

With Schellenbach out of the way, the trio became MTV darlings with “Fight for Your Right.” “We morphed from making fun of party bros to actually becoming those dudes,” Mike D admits as Jonze rolls footage of the 1987-era Beasties dousing beer onto their heads.

No wonder the Beasties spent the following decade trying to distance themselves from the novelty smash, refusing to comply when their A&R executive proposed writing a similar hit for Paul’s Boutique. When they reclaimed their commercial crown in 1994, they arrived through the back door, slotting an exhilarating hit—“Sabotage,” with its Jonze-directed video—on an album otherwise packed with stoner grooves, jazz-funk instrumentals and Buddhist chant. The Beasties’ maturity had manifested itself with an eclectic and growing musical curiosity, as well as the revelation that the doofuses behind “Brass Monkey” could actually play their instruments.

That Buddhist element was spearheaded by the late Adam “MCA” Yauch, whose conversion to Buddhism has been well-documented. In Beastie Boys Story, Horovitz and Diamond speak of their absent comrade with reverence and awe. They describe Yauch as the band’s creative and spiritual ringleader—of course they couldn’t continue the band without him, since, as Horovitz says, “the band was his idea in the first place.” And as the band grew, and grew up, Yauch was the moral center.

It was Yauch’s idea, we learn, to chop up a Led Zeppelin beat on 1986’s “Rhymin & Stealin.” Later, it was Yauch who nudged the band in an explicitly feminist direction on 1994’s “Sure Shot,” with its shout-out “to the mothers and the sisters and the wives and friends.” (“Not only did he speak to a lot of people,” Diamond explains in the film, “he spoke to the two of us.”) By the late ’90s, the group was including a sinuously funky lament against sexual harassment on 1998’s Hello Nasty and formally apologizing to the gay community for their earlier ignorance.

From there, the documentary essentially skips over 10 years—no mention of the post-9/11 comeback To the 5 Boroughs—and fast-forwards to a teary-eyed reflection on what would become the group’s last-ever show in 2009, shortly before Yauch’s cancer diagnosis.

Every teen icon, should they be lucky enough to survive youth fame, eventually grows up in unexpected ways. Molly Ringwald (who long ago dated Ad-Rock) has written about rewatching The Breakfast Club as a parent and being disturbed in retrospect by its sexist elements. Beastie Boys Story, and the trio’s broader legacy, feels like an aspirational guide for aging gracefully, atoning for your past stupidity, and still remaining funky.

It’s been eight years since Yauch’s untimely death, but it’s still a little jarring to see the Beastie Boys reduced to a duo. One gets the sense that if Yauch were here, the film would have a different tone—lighter, goofier, less elegiac. (And, of course, less imbued with the finality of the band’s legacy.) Because he’s not, Beastie Boys Story often feels like a memorial service for a friend. But it’s more like a memorial service that takes place months or years after the person’s death, when the initial shock of their passing has subsided and friends are ready to laugh again about the good times they shared. 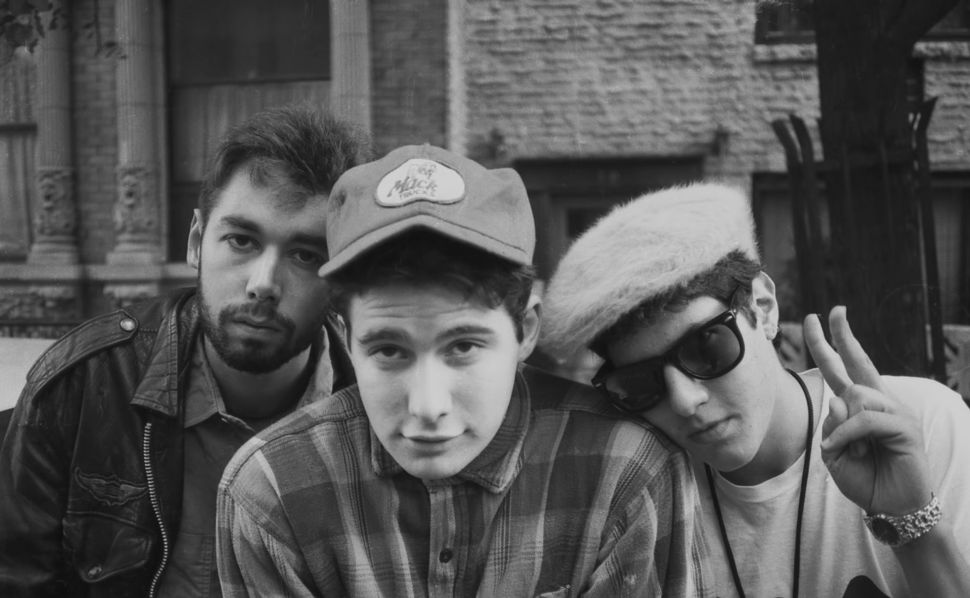