What is it about a global pandemic that makes people want to don a ruffled collar? With an unprecedented number of people sheltering in place and major museums shuttered worldwide, classic Flemish and Dutch portraits à la Vermeer, Rembrandt and Hans Memling are making an unexpected comeback as the style of choice for lots of quarantine selfies.

A popular Netherlands-based Instagram account that launched on March 14—tussenenkunstenquarantaine (Dutch for “between art and quarantine”)—encourages self-isolating art lovers to stage artworks at home and share the results. Museums were quick to join the party, challenging people to recreate favorite artworks from their currently-closed collections. And another Instagram handle, CovidClassics, documents the adventures of four quarantined roommates in Connecticut remaking some of art history’s greatest hits.

Among the many Frida Kahlo parodies and homemade versions of Grant Wood’s American Gothic, the genre of Flemish and Dutch portraits was an immediately trendy standout. For weeks, museumgoers stuck at home from the Netherlands and beyond have been fabricating elaborate headgear with bath towels, buckets, coiled telephone cords, and toilet paper in an effort to replicate the luxe lace, silk and embroidery of a bygone era.

Meanwhile, a few contemporary photographers have been drawing on the solemnity and gravitas of Dutch and Flemish portraits for years. Working under very different conditions—and motivated by completely different reasons—these three artists are well-versed in making this style their own.

“The idea of making something out of nothing changes our look on reality,” Jongmans explains. “A piece of plastic with text printed on it, used for packing a coffee machine or television, can resemble a piece of silk. And the lid of a can of tomato puree can look like a ring.”

Styled with monochrome backgrounds and studio lighting that makes her subjects glow, Jongmans’ portraits carry a message on consumerism—even throwaway polystyrene beads can be strung together to look like expensive lace, making us think twice about what we discard.

Spout, 2011 by Hendrik Kerstens. On view as a 24×20” print in our booth at @photolondonfair #photolondon #hendrikkerstens

When Hendrik Kerstens left his business world job at age 40, he became the primary caregiver for his daughter, Paula. Over the years Paula became his muse, and the focal point for Kerstens’ growing photography practice.

“One day Paula came back from horseback riding. She took off her cap and I was struck by the image of her hair held together by a hair-net,” Kerstens recalls. “It reminded me of the portraits by the Dutch masters and I portrayed her in that fashion. After that I started to do more portraits in which I refer to the paintings of that era.”

Kerstens has covered Paula’s head with motley materials since—like aluminum foil, a lampshade, shaving cream, and tangled USB cords forming a thorny crown. He’s expertly unraveled paper towel rolls to make a turban, and when he placed a pastry piping bag on Paula’s head he cleverly aimed the flowery spout at the viewer. Using masterful lighting, stark backgrounds, and a minimal number of props, the father-daughter duo has created an ongoing series of dramatic portraits that winks at their shared Dutch art historical DNA.

When American artist Nina Katchadourian boarded a flight in March 2010, she spontaneously decided to try to work on the plane—using only a camera phone and found objects. The ongoing series that began on that trip, called “Seat Assignment,” has to date resulted in over 2,500 photographs, video and sound artworks produced on roughly 200 different flights.

“’Seat Assignment’ is born from an investment in thinking on your feet, from optimism about the artistic potential that lurks within the mundane, and from curiosity about the productive tension between freedom and constraint,” Katchadourian writes. (This is a very timely sentiment, as many are constrained to the everyday, mundane objects of their homes and finding comfort in creative possibilities.)

Among the categories Katchadourian created within this larger project, a small group of photographs is called “Lavatory Self-Portraits in the Flemish Style.” It began on a flight in 2011, when she decided to put a tissue paper toilet cover over her head and snap a mirror selfie. Later, it looked to her like one of the 15th-century Flemish portraits she’d adored since high school.

She continued making these photographs and has used nearly everything stocked in an airplane bathroom, plus some carry-on items: paper towels, facial tissues, the clothes on her back, a neck pillow, and even the plastic bag used to package airplane blankets. “I never used toilet paper, not once,” she clarified to Observer (toilet paper rolls are a particularly popular prop at the moment).

“I do not think the current trend of recreating famous paintings at home, although very charming and often very clever, has much to do with my project although it might superficially seem that way,” Katchadourian explains. “The whole point was to test the constraints and working limitations of the airplane situation. What could I make out of nothing? What could I make under circumstances and in spaces where making art seemed highly improbable?” 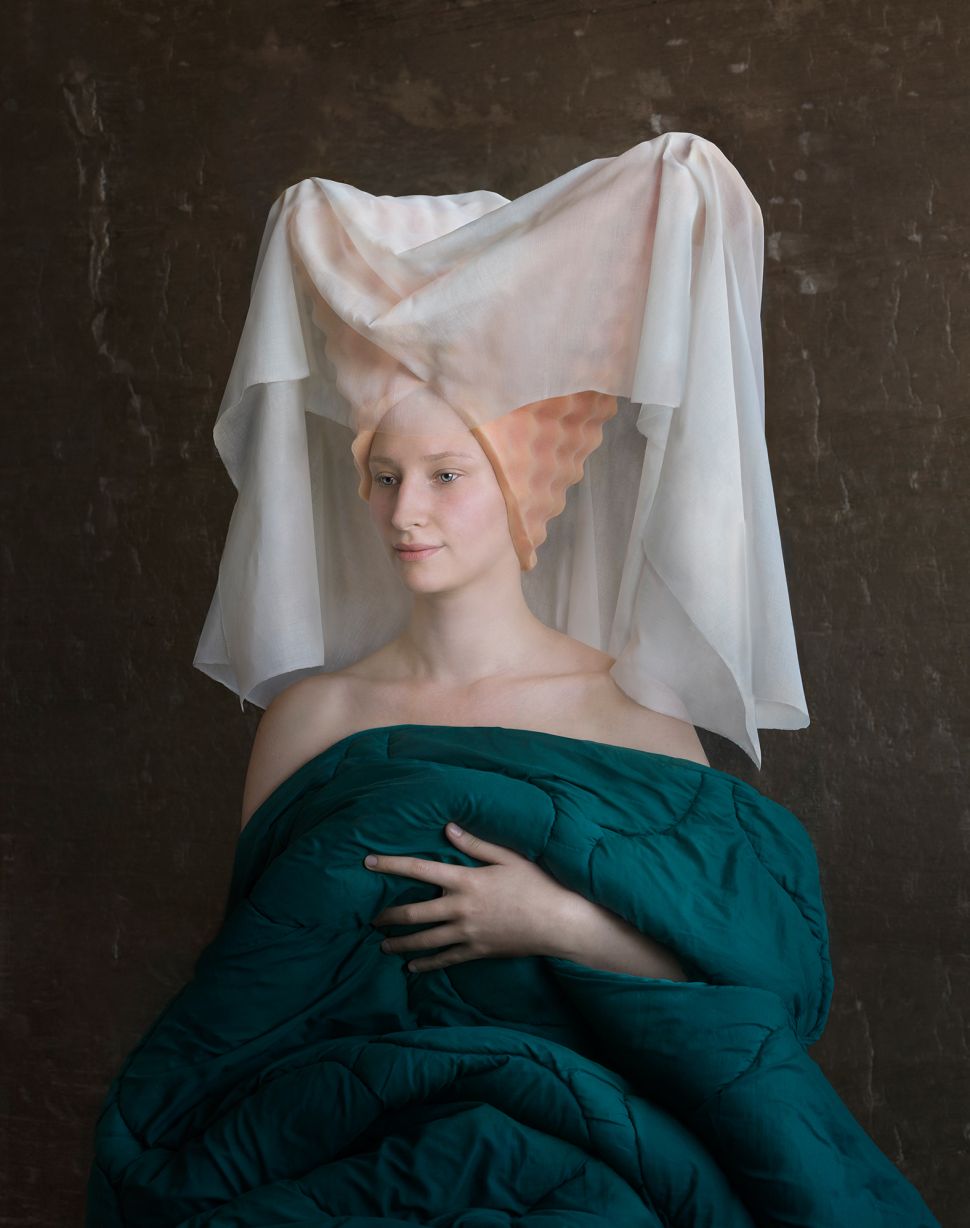