People are still dying, and hospital beds are overwhelmed by those suffering from coronavirus. As of early April, half of the world’s population now either lives under some degree of social distancing guidelines and is hopefully shut in responsibly or—worse—working at significant risk in essential jobs. In the United States, layoffs and furloughs are now a daily news item as entire industry sectors reel from the crisis. And we still don’t have enough of the masks or ventilators we need. The COVID-19 pandemic has put everything else on hold.

Amid all this the planet’s public spaces have emptied. Non-essential travel is all but halted, and so humanity’s tourist destinations, agoras, parks, museums, landmarks and other shared meeting points sit unbothered for the most part.

As of now, there is no quick fix to this virus. No vaccine is coming in the near future. All we can do is wait and remember the places waiting for us outside of our homes. We’ll return to them when we can.

The Eiffel Tower (above)

Right: A view from the nearby deserted Esplanade du Trocadéro on March 28, patrolled by a policeman near the tower. It was the twelfth day of a lockdown aimed at curbing the spread of COVID-19 in France. (Photo: Stephane de Sakutin/AFP via Getty Images)

Top: New York City’s Times Square, in Manhattan, as captured on September 9, 2019. Approximately 460,000 people, many of them tourists from around the world, will walk through Times Square on a busy day. (Photo: Alexandra Schuler/picture alliance via Getty Images)

Bottom: The view of Times Square on March 29, a rainy day. New York State and particularly its metropolitan area is the nation’s hardest hit population, with coronavirus cases topping 100,000 as of April 3. (Photo by Tayfun Coskun/Anadolu Agency via Getty Images)

Top: I.M. Pei’s Pyramid in the courtyard of the Louvre Museum on August 1, 2003. The pyramid is made of 603 rhombus-shaped and 70 triangular glass segments and Parisians and is a familiar site for Parisians and visitors to the Louvre, who mill around it every day. (Photo by Michel Setboun/Corbis via Getty Images)

Bottom: A view of the museum on March 31. Health authorities say the new coronavirus killed an additional 499 people in France that day as it continued to take a devastating toll on the country. France’s death toll to the coronavirus as of Thursday, April 2, had surged to 5,387 according to Reuters. (Photo by Julien Mattia/Anadolu Agency via Getty Images)

Top: In China, the national “Golden Week” holidays drive millions of visitors to tourist destinations like this section of the Great Wall outside Beijing, leading to crowds like this one on October 3, 2012. (Photo: STR/AFP via Getty Images)

Bottom: A Chinese boy walks a nearly empty section of the Great Wall on March 27, near Badaling in Beijing, China. A limited section of the tourist site was recently re-opened at the end of March. China recently recorded its first day with no new domestic cases of the coronavirus last week, though new cases later sprang up again. (Photo: Kevin Frayer/Getty Images)

Top: Photo-hungry tourists on the Brooklyn Bridge are used to hearing shouts of “Get out of the bike lane!” and “Move!” as they clog the narrow pedestrian path and spill across the white divider. This image was taken October 12, 2018. (Photo: Tim Graham/Getty Images)

Top: Bathing in the Trevi Fountain actually predates its modern construction by 18-century architect Nicola Salvi by many hundreds of years. It is one of Rome’s oldest public sources and was built at the end point of an aqueduct, where it fed to a public bath. Authorities have cracked down since it’s grown in popularity as an international tourist destination, as seen on summer days like this one from 2016. (Photo: Andrea Ronchini/Pacific Press/LightRocket via Getty Images)

Bottom: Its view on March 29. Rome’s historic streets are quiet in the wake of its nationwide lockdown. As of April 3, coronavirus had claimed 14,681 lives in Italy. (Photo: Marco Di Lauro/Getty Images)

Top: Once a Greek Orthodox cathedral, later a mosque in the Ottoman Empire and now a museum, Istanbul’s Hagia Sophia is one of the most historic and impressively built structures in the world, the jewel of Istanbul’s Sultanahmet district, as show in this 2011 photo. (Photo: Eye Ubiquitous/Universal Images Group via Getty Images)

Bottom: A picture taken on April 1, 2020 shows the empty streets around it. Turkish officials have repeatedly urged the population to respect social distancing rules, while 356 have died from COVID-19 as of April 2. (Photo: Ozan Kose/AFP via Getty Images)

Top: Celebrations on the 25th anniversary of the fall of the Berlin Wall—re-unifying East and West Berlin—lit up the Brandenburg Gate on November 9, 2014. (Photo: Sean Gallup/Getty Images)


Bottom: The view of Brandenburg Gate on March 31. In Berlin, gatherings of more than two people are prohibited and shops are closed. More than 1,200 have died from COVID-19, as of April 3. (Photo: Abdulhamid Hosbas/Anadolu Agency via Getty Images)

Top: On July 6, 2005, Russians crowded the Red Square in Moscow while waiting for the official announcement of which city would host the 2012 Olympics. The square is UNESCO World Heritage site and arguably Russia’s most important public meeting place, inextricably linked to Moscow and Russia’s politics and culture since the 13th century. (Photo: Tatyana Makeyeva/AFP via Getty Images)

Bottom: On March 31, the square sat empty but for two police officers patrolling it. Moscow went into lockdown on March 30 and more than a dozen other Russian regions took similar steps. At least 34 Russians have reportedly died from COVID-19. (Photo: Dimitar Dilkoff/AFP via Getty Images)

Top: Car, foot and bus traffic snarls the roads en route to the Great Pyramid of Giza, outside Cairo, as seen on June 29, 2014. The pyramids and the Great Sphinx of Giza, completed thousands of years ago, reportedly receive 14.7 million visitors each year. (Photo: Gale Beery/Getty Images)

Bottom: A man takes pictures in front of the Great Pyramid, which was emblazoned with a laser projection: “Stay Home” on March 30. (Photo: Khaled Desouki/AFP via Getty Images)

Top: The rush-hour commute on November 18, 2015. Grand Central connects several different commuter rail and subway lines that weave through Manhattan and connect it not just to the outer boroughs but to Upstate New York, New England and beyond. (Photo: Albin Lohr-Jones/Pacific Press/LightRocket via Getty Images)

Bottom: The view inside Grand Central on March 31. This week, President Trump extended social distancing guidelines for Americans to April 30. Many New Yorkers still ride subways and other public transit, their primary method of transportation in a dense city of 8.6 million. According to some projections, American deaths will peak in late-April. (Photo: Noam Galai/Getty Images)

Top: An icon of both religious and national significance, Rio de Janeiro’s statue of Christ sits atop the mountain Corcovado, the most prominent figure of Tijuca Forest, the tropical rainforest and national park that overlooks Rio. Here it is on a typical afternoon, September 15, 2015. (Photo: John Gress/Corbis via Getty Images)

Bottom: The statue was illuminated on March 18 with messages of international solidarity and calls to pray in a mass performed by the Archbishop of the city of Rio de Janeiro, Dom Orani Tempesta. (Photo: Wagner Meier/Getty Images)

For now it’s unclear when we’ll be able to return to these international wonders or even venture out into the world to hug our friends and families. All that we can look forward to is when it will be safe to do so. 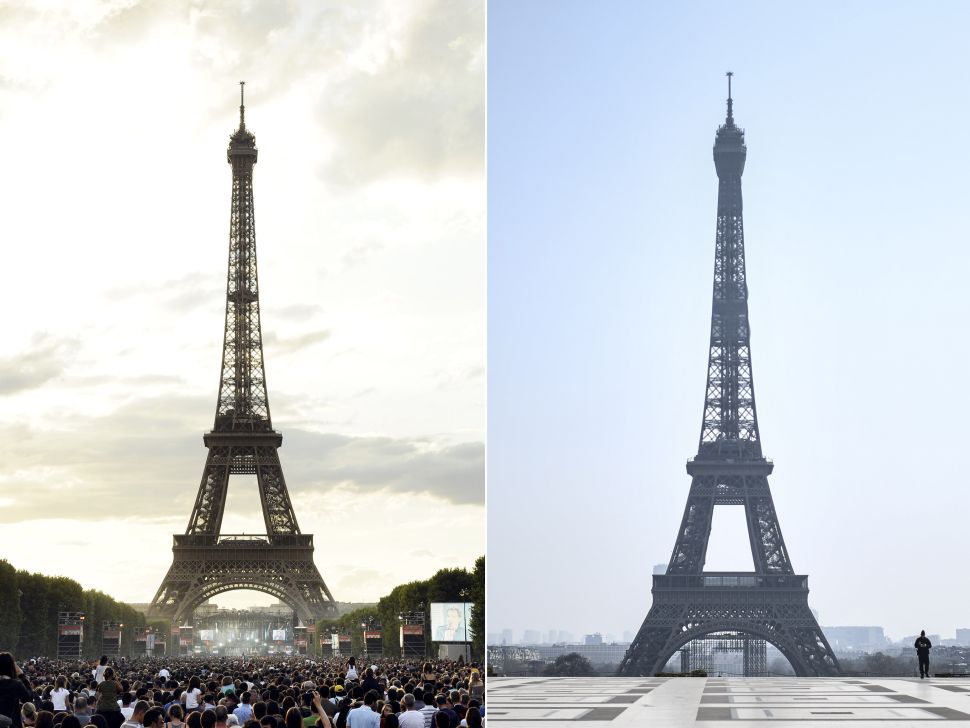