Earlier this week, Warner Bros. released the very first glimpse at its upcoming blockbuster Dune adaptation. Directed by critically acclaimed filmmaker Denis Villeneuve (Blade Runner 2049) and boasting a stellar cast headlined by Timothée Chalamet, this brief preview offered a small distraction as the coronavirus pandemic continues to squeeze the entertainment industry. Fair or not, Dune has now become something of a barometer for the health of Hollywood.

As movie theaters remain closed, dozens of blockbuster films have received new release dates. Dune appears safe with its December 18 debut and the hope is that multiplexes will open in mid-to-late summer. But the latter half of the year is now dominated by known quantities—James Bond, Marvel, DC, Pixar. Dune is the first big-budget endeavor to arrive as something of a wild card and its success or failure may speak to a larger Hollywood trend.

SEE ALSO: Why ‘Person of Interest’ Is the Key to Understanding ‘Westworld’ Season 3

“I think Dune was always going to be a very difficult sell for WB,” Jeff Bock, senior box office analyst at Exhibitor Relations, told Observer. “Stellar director, out-of-this-world cast and yet, hardcore sci-fi has had a difficult go of it at the box office of late.”

Frank Herbert’s 1965 novel of the same name is considered a literary classic and yet beloved books, especially ones from half a century ago, hardly guarantee cinematic interest. (See: A Wrinkle in Time.) David Lynch brought the dense and sprawling tale to the big screen in 1984, but it was savaged by critics and largely ignored by audiences. Relaunching the title in today’s IP-friendly climate in which moviegoers flock toward the familiar will be a challenge.

Bock notes that comparable science-fiction titles such as Ad Astra, Villeneuve’s own Blade Runner 2049, and Alien: Covenant have all struggled at the box office in recent years. The quality of these features—quite good!—is irrelevant when it comes to the financial facts. None of these movies produced a sequel, sold massive amounts of merchandise, or created lucrative promotional opportunities, all of which play a key role in selling big-budget blockbusters these days.

Warner Bros. has maintained an ambitious plan to split Dune into two features and an HBO Max spinoff series. Yet the proposed sequel has still not officially been added to WB’s schedule. The studio is understandably waiting to see how Dune performs at the box office, as is the rest of Hollywood. It may have name recognition and a cult following, but it does not boast the reliable fandom of a Star Wars. Success may embolden other studios to take a chance on high-concept new-to-screen IP with potential—everyone’s chasing Marvel in that way—while failure may convince them to further retreat into the relative safety of their own libraries.

“I can’t imagine a better director for this epic tome, but it will come down to one factor: the multiplex masses,” Bock said. “Will they show up en masse like they did for Lord of the Rings? WB desperately hopes so. It’s difficult not to be skeptical, though. The very serious nature of Dune is already one strike against it, as the majority of ticket-buyers prefer their sci-fi with a side of humor these days.”

Paul Dergarabedian, Comscore’s senior media analyst, believes that most high-profile movies will benefit from the pent-up demand and excitement to return to theaters. That optimism extends to Dune, which he believes will be successfully marketed on star power and big-screen visual attraction. But regardless of Dune‘s success or failure, he sees changes on the horizon for Hollywood in a post-coronavirus world.

“The consideration of budgets may become exceedingly important,” he told Observer. “Blockbusters will still be produced and the movie theater has survived everything thrown its way. But what may change is the negotiating and revenue dynamics of how movies get made in the future. What this unprecedented situation has revealed is that you don’t what to be leveraged. You never know when unexpected circumstances will disrupt your business.”

Dune is a case study of sorts for other studios—a risky and expensive but wildly ambitious swing for the stars. Given the economic losses Hollywood is enduring as the pandemic continues, it’s fair to wonder if studio development will allow for such gambles in the future.

“Studios will try to be more judicious, careful and strategic when it comes to their purchasing power,” Dergarabedian said. “You might see some near-term fiscal conservativeness in terms of what they acquire and greenlight… Often, changes aren’t as broad and sweeping as we think in the moment. But this is a different situation we’ve never seen before and the long-term impact has yet to be determined.”

Will critics swoon over Dune as they have for the majority of Villeneuve’s oeuvre? It’s very likely; but, as Bock notes, reviews don’t even begin to cover the exorbitant costs of sci-fi epics. We can’t yet know if Dune will be the first or last of its kind in the era of modern franchise filmmaking. 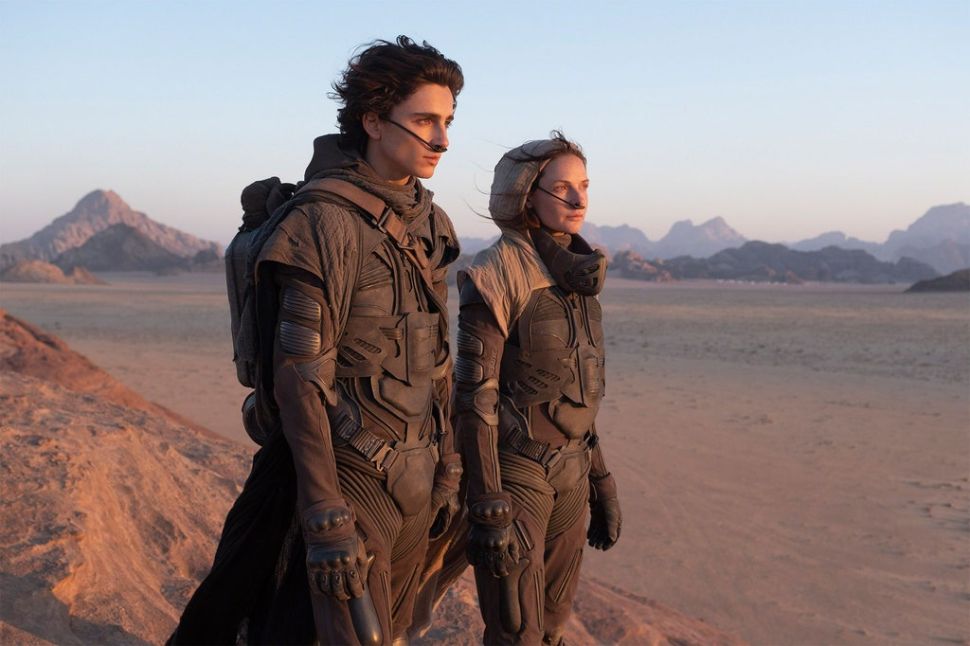