With much of the world in lockdown, viral fun and memes have helped keep spirits up, but one annual favorite has swept in ahead of its time with newfound significance this year: the NSYNC “It’s Gonna Be May” play on the boy band’s 2000 hit “It’s Gonna Be Me.”

While the fun reference to singer Justin Timberlake pronouncing “me” as “may” in the track’s chorus usually makes the viral rounds in the days leading up to May 1, the joke has already gotten traction thanks to people being unable to leave their homes in the coronavirus pandemic.

It wasn’t even April before a photo of Timberlake with a poem about quarantine started making the rounds. “Roses are red, April is grey, the next time you leave your house,” the meme read, with Timberlake’s face showing below and implying the final line, “It’s gonna be May.” (Pre-coronavirus versions have stated “In a few days” instead of “The next time you leave your house.”) Another quarantine-related meme read: “Me: when can I leave my house again? The government:” with a clip of Timberlake and the words, “It’s gonna be may,” shown below.

Timberlake even got in on the fun, posting a clip of Lizzo singing the line on Instagram, alongside a caption questioning when people would be allowed out of quarantine. “When’s the next time we leaving the house, @lizzobeeating??” Timberlake wrote. “But, for real… jokes aside… STAY IN!!!!”

Recording the song in Sweden two decades ago, *NSYNC’s Lance Bass recently told Observer that the quintet had no idea how iconic one lyric would become. “Not at all,” he says of the viral trend, which according to Know Your Meme started in 2012 after Tumblr user “amyricha” shared the first picture. Buzzfeed then posted another Tumblr user’s photo of an April calendar with Timberlake taped onto the 30th. “While the guys were producing that song, they suggested that Justin say it that way,” Bass said. “It just sounded better. They liked that kind of register, but at the time no one really thought anything of it—especially, nothing to do with April 30!”

“That did not dawn on us until maybe four years ago when all those memes started happening,” Bass adds. “Then it was like, ‘Oh my gosh, that’s really funny!’ But who knew?”

Timberlake meanwhile has given the song’s co-writer, Max Martin, full credit (and full blame) for the pronunciation.

“In my defense, Max Martin made me sing ‘me’ that way,” the musician previously said during a radio interview with 95-106 Capital FM. “I just want to throw Max Martin on the chopping block for that one. But thank you Max because now we have the meme of the century.”

“I think he just wanted me to sound like I was from Tennessee,” Timberlake added about the logic behind Martin’s request.

More recently, Timberlake appeared on Bass’ podcast, The Daily Popcast With Lance Bass, explaining how Martin’s powerful knack for knowing what might make a musical impact prompted the idea.

“I think he just has a real keen ear for what’s going to be the most memorable,” Timberlake told Bass. “If you go back and look at that song, anyone can sing along to that song [but] you can’t sing ‘It’s gonna be ‘me.’’”

However, in an interview with Observer, the song’s other co-writer, Andrea Carlsson shed further light into the phenomenon, explaining how Martin’s background fronting Swedish band It’s Alive, before he got into pop songwriting, played a key role in the lyric.

Martin, Carlsson and producer Rami Yacoub were in Key West, Florida, working on a follow-up to the “monster of a song” that was “Bye Bye Bye” when “It’s Gonna Be Me” was born. Yacoub suggested they stick to simple ideas and casually whistled what would become the melody for the song’s lyric, “Every little thing I do,” with Martin immediately suggesting they lay down the idea.

What the trio never expected was that decades later “me” being pronounced as “may” would spawn NSYNC-themed memes every April 30th. “That whole style of singing where ‘me’ became ‘may’ was Max’s take on how to make the vocal style more interesting to listen to,” Carlsson says about the style, which is also heard with the word “baby” in the Backstreet’s Boys’ opening line of their 1999 song “It’s Gotta Be You.”

“You hear it a lot in Britney’s music too—‘Bay-bay’ instead of ‘Bay-bee,’” continues Carlsson, who is currently recording an acoustic version of the track with Evan Stanley, son of KISS rocker Paul Stanley. “Max used to play in a funky rock band, so I think that’s where he brought that funkiness into Backstreet, NSYNC and Britney. ‘Me’ became ‘may.’ It’s fascinating!”

Pronunciation aside, label executives who worked on the album recall how they knew the track was a future smash the second that they heard it.

“It was just a hit record,” says RECORDS CEO Barry Weiss, who was president of the group’s label, Jive Records, at the time. “We just loved the record and thought, ‘Wow. This is a slam dunk second single. Let’s go!’”

“I think it’s hysterical that it pops up on social media every April 30th,” Weiss adds about the meme, which reportedly coincides with the music video’s YouTube traffic peaking and play counts on the song increasing on April 30. “It makes me go, ‘Wow, I was part of pop culture in many different ways and that was definitely one of them.’”

Joe Riccitelli, who worked in Jive Records’ promotions department at the time and is now co-president of RCA Records (where he continues to work with Timberlake), agrees that they knew immediately that “It’s Gonna Be Me” was a surefire hit.

“When we heard the song the first time and we knew that we were going to be following ‘Bye Bye Bye’ with it, we just knew we had back-to-back number one records,” Riccitelli says. “We were spoiled for riches with that particular album and it was one of those things I’ll never forget. Between working on that and [Backstreet Boys’] Millennium—those two moments in my personal career are up there, as much as breaking Khalid or anything else I’ve done.”

As for the meme, Riccitelli loves how it has “evolved” over time—as shown by its newfound coronavirus popularity. “It was something that was kind of a joke the way started, but it’s evolved into an annual thing and I just love seeing Justin or the other guys tweet it out or put it up on Instagram every year.” 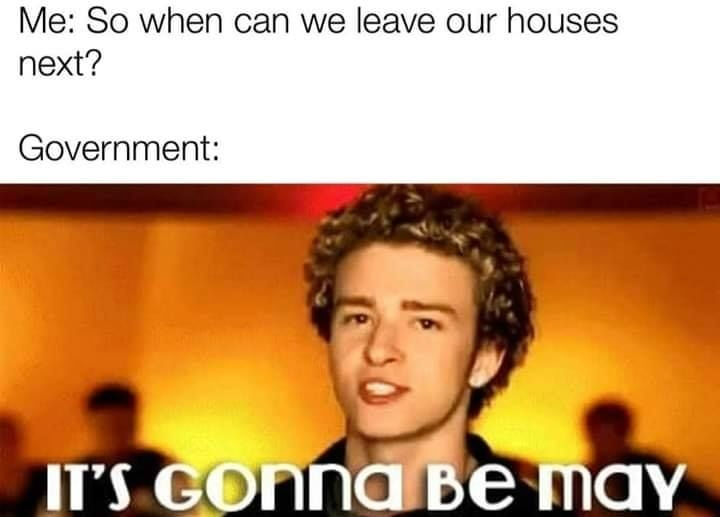