It came as a great relief to learn that, after 14 years, Julia Alvarez was publishing a new book for adults. During a time of considerable unrest, it is a comfort to put yourself in the hands of a skilled storyteller, one proven to be so through her jumps from genre to genre—poetry, fiction, essay and children’s literature.

As a teenager in the mid-1990s, I first came to the writing of Julia Alvarez through her novel In the Time of the Butterflies. In this novel based on historical events, four sisters (Patria, Minerva, María Teresa and Dedé Mirabel, known as Las Mariposas or Butterflies) fight the Rafael Trujillo military dictatorship in the Dominican Republic. In 1960, three of the four were murdered for their efforts and the story had long haunted Alvarez.

SEE ALSO: Paul Lisicky on Documenting the Power of Provincetown in the 1990s

Born in 1950 in New York, Julia Alvarez moved back to her parents’ homeland of the Dominican Republic when she was only three months old. The family’s repatriation lasted ten years until 1960 when her father was exiled after his involvement with a coup to overthrow Trujillo—the same year that the Mirabel sisters were found dead.

This was far more than your typical historical novel. In my Catholic girlhood, I connected the legend of the Mirabel sisters with that of Joan of Arc. I saw Las Mariposas within a long line of women working against all odds to affect change. The struggle is universal; Alvarez links the history of Latin America to that larger narrative. Beyond that connection to a tradition of martyred women, I was spellbound by the strength of family and the lyrical beauty with which she treated grief, anger, love and desire. This bold social work was relatively new to readers in the 1990s, for whom diverse literary voices were relegated to a category. This was Latina writing that refused to remain in the margins.

Interweaving stories of independent women bound by language as well as family, Alvarez first came to prominence in 1991. At age 41, she was an accomplished creative writing professor and published poet, but it wasn’t until the publication of her debut novel, How the Garcia Girls Lost Their Accents, in 1991 that Alvarez became a major figure in 20th century American literature. Centered around four Dominican sisters, finding their way as immigrants in the United States, How the Garcia Girls Lost Their Accents was a landmark book, solidly placing her among the ranks of fellow writers such as Jamaica Kincaid,  Amy Tan and Maxine Hong Kingston, women who brought the immigrant experience to the center of contemporary literature.

It’s been nearly fifteen years since her last novel, but Afterlife is as audacious and relevant as any of Alvarez’s earlier works. At the center of the book is Antonia, a recently retired English professor at a New England college. She’s also newly widowed. Her tenderhearted, principled husband Sam was a doctor as well as her champion. Flush with grief, she is unmoored by his loss.

Alone as she may be, life finds a way to crowd Antonia’s world. Her three far-flung Dominican sisters fret about her loneliness. Together they moved to the United States as children. Their experience as immigrants informs Antonia’s relationship with her neighbor, whose farm employs undocumented workers from Mexico. One of the undocumented dairy hands, Mario, wants to bring his longtime girlfriend to the United States. Antonia helps him make calls and arrangements for her arrival, but nothing prepared her to find a teenage, undocumented, and pregnant Estela sheltering in her home upon her return from a trip to visit her sisters.

Even in the midst of great sorrow, life doesn’t pause for a soul. While Antonia struggles to mend Estela’s now estranged relationship with Mario, she’s also trying to wrap her head around caring for this vulnerable young woman who was until recently at the mercy of coyotes, trafficking immigrants from Mexico and Latin America to the United States. All the while, it becomes rapidly clear that her brilliant sister Izzy is becoming increasingly unstable. Toggling between her ties to family, a sense of justice, and self-preservation, Antonia must prepare herself for roles she never thought she’d assume.

Throughout the book, Antonia attempts to ground herself with literature, the tools of her trade. But even wise chestnuts fail to heal the wounds of so many. Ultimately what comforts both her and her readers is a mantra of sorts. Gathering herself in the face of turmoil, she considers the words of her late husband, who, when faced with adversity, would say, “Let’s see what love can do?” Over the phone in Vermont where she lives and is now sheltering in place with her husband, Alvarez spoke with Observer about the origin of that line. “It came from my meditation group. We’ve got all kinds. We’ve got atheists, we’ve got agnostics, we’ve got Episcopalians and Buddhists. But one is a Quaker and she said, in a hard time, one of the things that the Quakers say is, ‘well, let’s see what love can do.’ But it’s also something that I would hear in a different form from certain of my old tías. They wouldn’t go into the fray fighting, but would say something comparable: ‘How we can do it with love.’ It’s a form of Let’s see what love can do.”

Pulling from different traditions, with this book, Alvarez steps away from her tendency to write enormous generational sagas. In fact, she came to write Afterlife after working for many years on a much larger novel. But it was her desire to focus on loss and grief that made her approach this one with an eye for brevity. “I’m a huge admirer of that Japanese sensibility of taking more and more away so that what remains is charged,” she said. “I’ve always admired it, but I’m a Latina, my novels have so many points of view, and one story leads to another. I’m definitely a daughter of Scheherazade. Yet I’ve always admired those short poetic novels that people want to sort of put in this diminutive genre called novella because they somehow aren’t those big important novels.”

She extends her admiration for this form, saying, “I think of the old Pascal saying, ‘Had I had more time, I would have written a shorter letter.’ Shorter novels are so hard to write and I’ve always wanted to write one.” It wasn’t her intention to superimpose this form on a story. Yet the storyteller in Alvarez knew how best to render the lives of her characters. “I wanted to write a short, intense novel. Call it lyrical. Call it obsessive. I felt that this was a form that would embody how to live in a diminished world. It also explores how you tell stories in a diminished form. I love when form reflects content in that way.”

Living in a rapidly contained world, readers will appreciate Alvarez’s accomplishment. We too know how it feels to barely come up for air before the next loss rears its head. Capturing one woman’s inability to situate herself within an ever-changing map of grief, Alvarez creates a world so like our own. With incredible empathy and intimacy, Afterlife is a searching book that expresses the emotions and desires for which language is wholly inadequate. It rings with truth for the losses we can only learn to live with which will never fully heal. 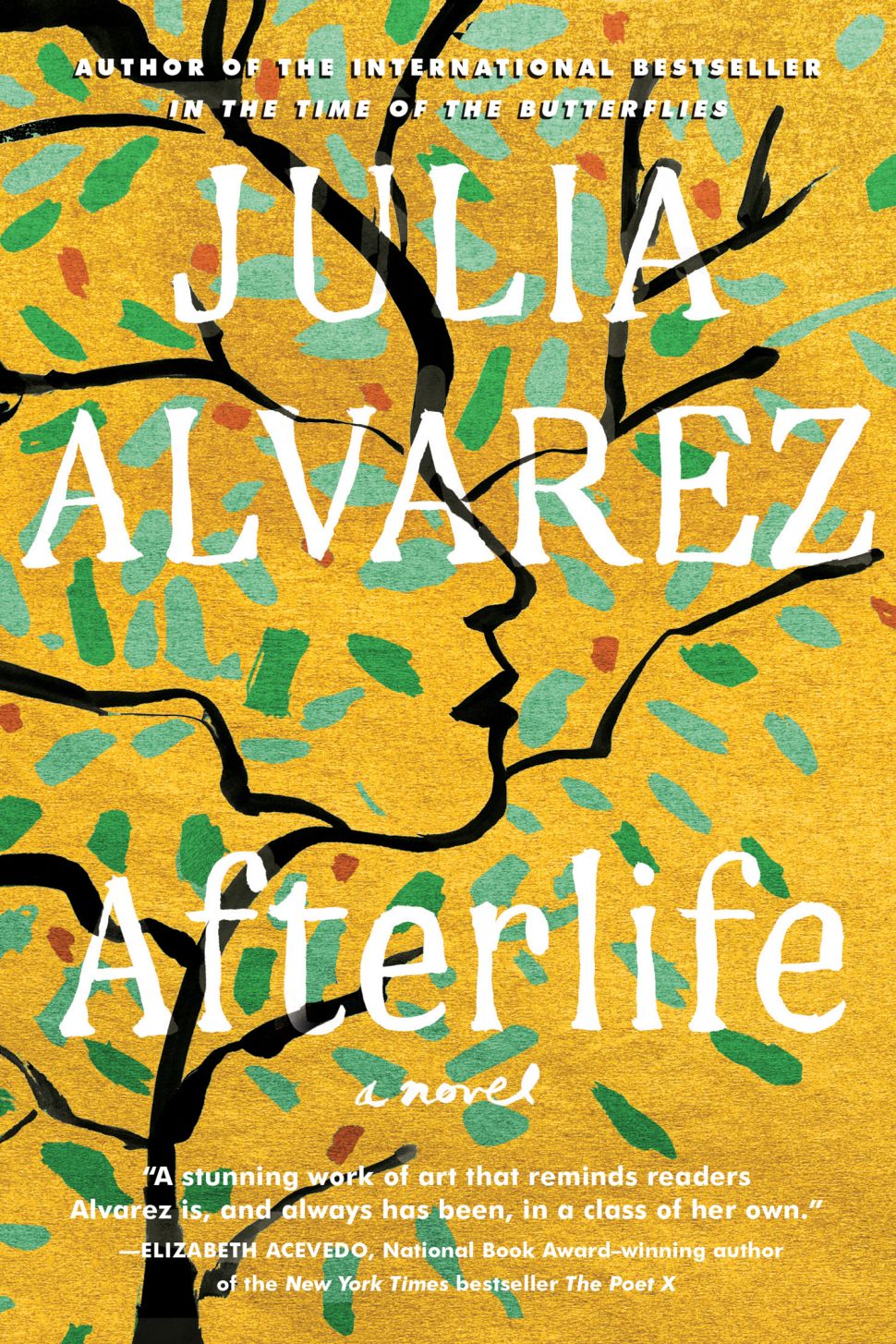