While the vast majority of Americans self-isolate to flatten our communities’ respective curves, small business owners across the country are wondering if they can afford to re-open after stay-at-home orders subside. Comic book shops have been especially hard-hit. As lauded stores shutter and the industry struggles to adapt to the times, high-profile comic creators James Lee and Rob Liefeld are auctioning original superhero illustrations to raise money for their brick-and-mortar comrades.

The project started on Monday when D.C. Comics publisher and Chief Creative Officer Jim Lee posted a hand-drawn sketch of character Nightwing to his Instagram. Lee’s illustrious career began at Marvel, where he worked on such titles as The Punisher and X-Men, then founding WildStorm Productions, which sold to DC Comics. He’s since illustrated some of DC’s most famous characters, like Batman and Superman, before attaining the role he holds today.

Nightwing! Here’s a chance to get some original art and do something good during these unprecedented times. I’ll be drawing and posting 60 different sketches—one a day over the next two months which I will then be auctioning off with all the proceeds going to different random brick and mortar stores. High bidder of each sketch gets to pick the next DC character I draw for the very next sketch! No character to be repeated! PLEASE DO NOT BID NOW. Will start officially this Wednesday (4/1) but just wanted to give all of you who want to participate a heads up. #sketchingathome #notanaprilsfoolsjoke #DCcharactersonly

Nightwing was accompanied by a note which read, in part, “Here’s a chance to get some original art and do something good during these unprecedented times. I’ll be drawing and posting 60 different sketches—one a day over the next two months, which I will then be auctioning off with all the proceeds going to different random brick and mortar stores.”

A subsequent post clarified that each day’s sketch would be a 9-inch by 12-inch pen and ink. The auctions take place for three days on eBay under the username “chunkymonkey0000”. Each day’s winner also gets to pick the sketch for the next auction.

On the last day of its auction, the Nightwing sketch is set to go for at least $4,300. A subsequent auction featuring Bizarro Superman (which Lee wrote he’s never previously had the chance to draw) is at a $2,325 bid.

Following Lee’s post on Monday, illustrator Rob Liefeld followed suit, posting, “WIN ORIGINAL ART! Comic books gave me my career! I love this art form so much and it’s time to give back! I’ll be auctioning off one original sketch every day here on @instagram with proceeds going towards comic book stores in need! They need our help now more than ever in these difficult times!”

VENOMPOOL & TMNT!! Day 3 sketch raising money for comic stores in these difficult times! I’m trying to draw sketches with mass appeal. Leave your bids here in the comments and we will have a winning bid decided at 5pm pacific tomorrow! For tonight, I’m playing for @popctrst in Anaheim! You will pay the store directly I’m just the art mule! Thank you for your support! #deadpool #marvel #venom #tmnt #teenagemutantninjaturtles #robliefeld

Liefeld gained prominence in the comic book industry during the 1990s, when he co-created some of Marvel’s most enduring characters of that era, especially the mutants Cable and Deadpool, among other achievements.

His first sketch, auctioned Wednesday, featured Deadpool and Harley Quinn and raised $1,350 for Zeus Comics in Dallas, Texas. The shop posted a sincere thank you, “We are humbled he thought of us and our community. He proves once again he’s a true hero for local comic shops.”

Subsequent sketches have featured major villains Venom & The Joker and the unexpected duo of a Venom/Deadpool mash-up accompanied by Raphael from the Teenage Mutant Ninja Turtles. Anyone interested in having a say in Liefeld’s next sketch should sound-off in the comments on his latest post.

Whether you’re a comic nerd or an art fan, these auctions offer a chance to procure a unique and beautiful piece while doing good for a community in desperate need. Hurry up and bid before this chance slips away. 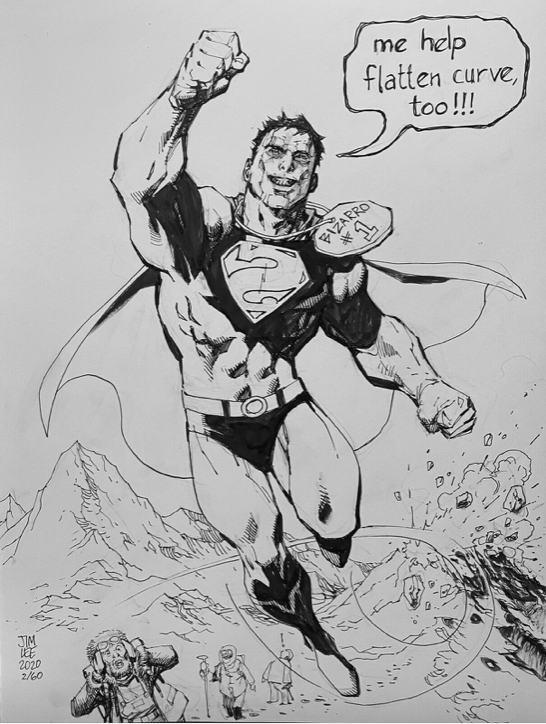