As the world remains on lockdown due to the coronavirus pandemic, those in self-isolation are desperate for new entertainment to pass the time. While Netflix’s 10 most-watched television series and movies are a good place to start, another recent release has quickly soared ahead of the rest of the streamer’s library. Since dropping its fourth season on April 3, La Casa de Papel (known in the States as Money Heist) has become the most in-demand title in the world this week.

From April 3 to 5, La Casa de Papel was 31.75 times more in demand than the average series globally, beating out such perennially popular series as Game of Thrones, The Walking Dead, Brooklyn Nine-Nine and Westworld, according to Parrot Analytics. The data firm is the leading global content demand analytics company for the multi-platform TV business. With the world’s largest TV audience demand datasets, the company currently tracks more than 1.5B daily expressions of demand in over 100 languages from 200+ countries.

SEE ALSO: 2020 Will Likely Be the Worst Box Office Year in Over 25 Years

La Casa de Papel is a wild ride. The series first began with eight thieves taking hostages and locking themselves in the Royal Mint of Spain as a criminal mastermind manipulates the police to carry out his plan. From there, complexity abounds. We could bridge the gap from the show’s start to its recently released fourth season, but the rescheduled Olympics is coming up in 2021, and we don’t want to miss that.

Perhaps Parrot’s findings shouldn’t come as a surprise. Season 1, which hit Netflix in 2017, was hailed as the first mainstream heist series on Spanish television. It was developed by screenwriter Álex Pina and director Jesús Colmenar and specifically designed to upend conventions and expectations associated with the genre. Through the surrealist elements that bend reality, the red motif that provides a visual aesthetic, and the assortment of time-jumps, flashbacks, and unreliable narration, it was clear that La Casa de Papel was determined to be different in form and function. Interest soared after its non-traditional rookie run, which introduced a host of morally ambiguous and versatile characters that pivoted from protagonist, to anti-hero, to antagonist and back at the drop of a hat. The show’s fanciful escapism has captivated audiences ever since. It turns out that viewers enjoy subverted expectations. 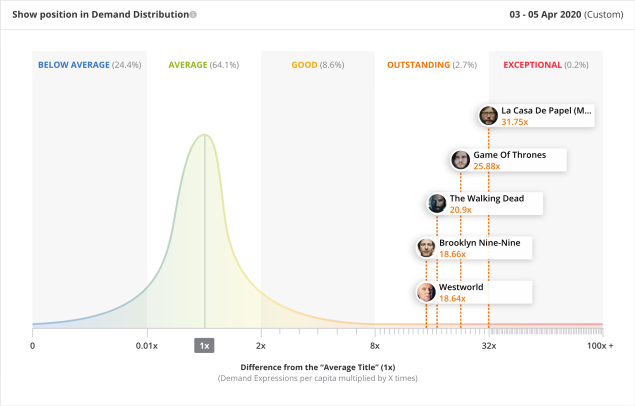 Demand for Season 4’s first three days has soared +36.6 percent compared to Season 3 in the same time frame. From July 19 to 21, 2019, La Casa del Papel Season 3 drew 23.24 times the demand of the average series globally and was the fourth most in-demand series in the world. As we’ve seen in key regions international regions affected by COVID-19, streaming has seen a significant uptick in both traffic and new sign-ups. Even linear television is seeing improved ratings amid worldwide self-isolation and social distancing. That the non-English series could have such a forceful global footprint while still prioritizing cultural identity is a great sign for Netflix and a testament to the show’s execution.

“This is a remarkable milestone for a Spanish production,” said Alejandro Rojas, Director of Applied Analytics at Parrot Analytics. “Since the series’ premiere in 2017 and for months before Netflix added it to its catalogue, Parrot Analytics tracked higher than usual demand not only in Spain, but in several international markets. It was clear then that series creator Álex Pina found a powerful way to connect with audiences across cultures and languages. After it became available on Netflix, its demand accelerated with each new season. Netflix has capitalized on this strong demand and leveraged its international platform to catapult the series into a truly global hit.”

Parrot Analytics’ data is backed up by TV Time, a multi-platform, virtual TV tracking community of millions of users that use the app to track and react to the cable, broadcast, and OTT show they’re watching. According to TV Time’s Binge Report—which ranks shows with the most binge sessions, or when four or more episodes of a show are watched and tracked within a given day— for the week of March 30-April 5, La Casa del Papel topped the chart with a 16.75 percent binge share. It was followed by Elite, Brooklyn Nine-Nine, Friends and Grey’s Anatomy in the top five.

Imagine smashing together the romantic drama of your favorite telenova, the action comedy of Back to the Future, the anti-capitalistic sentiments of Parasite filmmaker Bong Joon Ho and the visual flare of a drunken Las Vegas night and then douse the entire concoction with a spritz of crazy and you get La Casa del Papel. No wonder it’s such an attention-grabber. 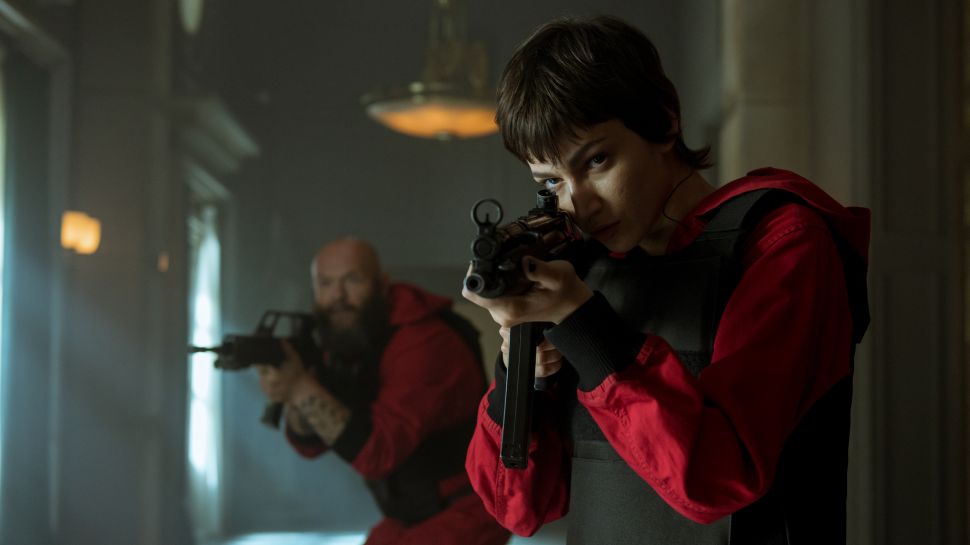