All hail, Tiger King. As the coronavirus pandemic has leveled powerful players in the entertainment industry such as Disney and WarnerMedia, Netflix continues to thrive. Shockingly, the streaming company’s stock—which was trading at $422.96 when the market closed on Friday—has actually jumped 30 percent over the last month following a brief dip in early March. The surge of interest that has resulted from self-isolation, social distancing and quarantine has Netflix in prime position ahead of its Q1 earnings report on Tuesday.

SEE ALSO: Here’s What It Will Take for Movie Theaters to Re-Open Post-Coronavirus

Normally, Netflix’s complete reliance on new subscription growth to drive revenue is considered a weakness. But in this market, with traditional media losing advertising dollars and cinemas still closed, it has become an asset. Netflix’s stock is currently trading at its highest level since July 2018 amid traffic spikes and a deluge of new sign-ups. As Schiffer mentioned, the halt in production has actually lowered Netflix’s normally aggressive spending while leaving the streamer as one of the few entertainment hubs still able to deliver fresh content in the short-term. As cynical as it is, the COVID-19 outbreak provided Netflix with the boost it needed to continue pacing the streaming industry.

The pandemic has forced millions of people to shelter at home while providing increased opportunities for growth. But this also means that the streaming space has become far more crowded as new competition springs up across international markets. Disney+, for example, began its overseas rollout, which helped push the fledgling service to 50 million paid subscribers. But there’s reason to believe Netflix’s growth numbers will be rock solid this quarter.

According to data provided to Observer by SimilarWeb, a leading market intelligence company, U.S. visits to Netflix.com’s sign-up page have increased by more than 100 percent year-over-year (YoY). Worldwide unique visitors to Netflix.com hit an all time high in March. While there was limited YoY growth in registrations during the months of January and February, the week ending March 22 marked a dramatic change for Netflix, as sign-ups grew nearly 125 percent YoY, and remained high in the following weeks.

Since Netflix only saw strong growth in the last couple of weeks of the month, as the U.S. locked down, the momentum may have happened a little too late in the quarter to substantially move the needle for domestic revenue. However, SimilarWeb expects to see a good positive movement in quarter-end subscriber numbers. It’s a sentiment shared by others.

“No doubt that Netflix earnings will show tremendous growth on a worldwide basis from a subscription perspective,” Al DiGuido, Chief Revenue Officer of North 6th Agency, told Observer. “One would think that consumers were so interested in non-COVID content that the brand didn’t have to lower sub-prices and/or run promotions to recruit this new subscription base. As such, I expect overall profitability for the service should be up in the near-term.”

New releases such as Tiger King, Ozark Season 3, and Money Heist Season 4 have kept Netflix at the center of the entertainment conversation. But while the platform is riding a wave at the moment, there are concerns looming on the horizon. The supply of fresh content is a significant issue in the long-term for both Netflix and the entire film and TV industry. Chief content officer Ted Sarandos has already admitted that Netflix has enough new deliveries to cover the next few months, but not much longer if the production suspension remains in effect. And without easy access to the crop of current films making their way to video-on-demand—The Lovebirds aside—this could become a real problem.

“In order for Netflix to maintain strength, it will need to bring many more ‘Tigers’ into its programming schedule,” DiGuido said. “Netflix cannot take for granted that the viewer will remain loyal if content is consistently refreshed. Once sports and other live-programming return to the viewer’s choice, Netflix could be pushed to the side due to its library of also-ran content choices.”

Despite this, Netflix is all but guaranteed to be popping champagne when it reports its first-quarter earnings. After all, what else is there for people to do during lockdown but watch Netflix? 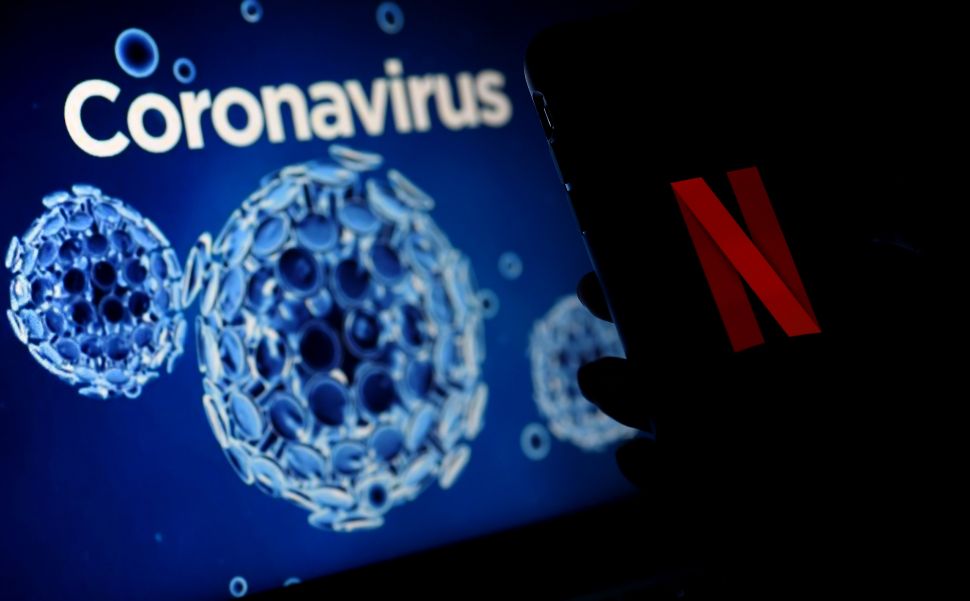