Recently, Netflix has found success in producing original, funny coming-of-age comedies—a genre that includes hits like Sex Education and On My Block, two shows that are frank about youth issues. Its latest entrant, Never Have I Ever which premieres Monday, April 27, is also primed to become a favorite.

Created by Mindy Kaling, Never Have I Ever follows Devi Vishwakumar (Maitreyi Ramakrishnan), a first-generation Indian American teenager who is beginning her sophomore year. It’s a rough time in any teen’s life (and, according to the rules of teen comedy, doubly rough if you happen to be a smart nerd) and Never Have I Ever goes further to ramp up the stakes with Devi’s unique circumstances. Throughout the series, she’s desperate to up her popularity and dying to have sex with her cool crush while also struggling to reconcile her two cultures and come to terms with deep grief.

Shortly before the series begins, Devi’s father suddenly dies (during one of her recitals). The two had a close relationship—he appears in flashbacks—and his death causes more tension between Devi and her mother. It gives the show an added urgency, something huge that Devi is still dealing with. (She frequently sees a therapist, played by Niecy Nash, although Devi prefers to talk more about her friends and crushes than her trauma.) Unfortunately, it’s here that Never Have I Ever immediately stumbles: right after her father’s death, Devi’s legs “stopped working” and she ends up temporarily—and psychosomatically—paralyzed, using a wheelchair. It’s a peculiar choice for Never to take, particularly because the rest of the series promotes casual and necessary inclusivity throughout its characters. But this narrative approach is executed awkwardly; when she’s able to walk again, thanks to seeing her crush Paxton Hall-Yoshida (Darren Barnet), her brief paralysis is only brought up in reference to how it made her even more unpopular. Now, the show proclaims, Devi will be much cooler now that she’s no longer that girl in the wheelchair.

Fortunately, Never Have I Ever does improve as it moves along (and, unlike many streaming shows lately, you don’t have to wait too long for the good stuff) which is largely due to the performance of newcomer Maitreyi Ramakrishnan. She’s perfectly cast as Devi, a character who feels far more realistic and lived-in than many teens on ridiculously heightened dramas. Devi is prone to anger (“a straight-up psycho”), she blurts out the wrong things, and she makes mistakes that frustrate the viewer even as she tries to justify them. But the key is that we never hate her—Ramakrishnan plays Devi with a level of charm that makes her lovable and well-rounded. We’re on her side during her inappropriate asks of her therapists, her quick-tempered retort to her cousin, her boldly marching up to Paxton and asking, in no uncertain terms, for sex. In short: Devi is a teenage girl, all driven by moodiness and hormones. (The show’s approach to sex is also notable, neither ignoring it nor ramping it up to soap opera levels. Devi is like many teenagers: both obsessed with and apprehensive about having sex for the first time.)

Never Have I Ever does well with both bringing in aspects of Devi’s culture—something that Kaling struggled with on The Mindy Project, an inferior show—and with portraying the typical concerns of an awkward teenager. Upon moving to America, Devi’s parents clung tightly to their roots while Devi, as the show explains, is “Indian” but not “Indian Indian.” A highlight of the series is her ongoing conflict with her overprotective mother Nalini (Poorna Jagannathan, who juggles her character well). A stern but caring parent, Nalini is intent on seeing Devi follow in the footsteps of her older, beautiful cousin Kamala (Richa Moorjani) who is working on her doctorate and preparing for an arranged marriage. Devi, meanwhile, is looking forward to becoming an “atheist who eats cheeseburgers every day with my white boyfriend.”

Another highlight in the program revolves around Devi’s buddies and her high school. Her best friends are Eleanor (Ramona Young), an aspiring actress with all the appropriate dramatics, and Fabiola (Lee Rodriguez), a robotics nerd who is coming to terms with her sexuality. Together, the trio are tight-knit and supportive, even when Devi isn’t exactly putting her all into the friendship. They argue but encourage; they keep secrets but stick together. Then there is Devi’s school nemesis Ben Gross (Jaren Lewison) who could easily have become a one-note asshole character, but instead the show gives him surprising depth as it goes on. Same goes for Paxton, who eventually rises above the stock dumb-jock crush.

Despite a rough beginning, Never Have I Ever quickly falls into an easy rhythm, one that’s ideal for our new world of quarantine marathon-viewing, considering I breezed through the show in an afternoon because it was such an easy, affable watch. Even when the show gets a bit predictable, in terms of teen relationships and parental conflicts, it remains so endearing that I couldn’t fault it. Plus, it has enough originality and fun little quirks—the series is narrated by tennis great John McEnroe, a choice that makes sense once you watch—to keep it feeling fresh.

Never Have I Ever premieres on Netflix Monday, April 27. 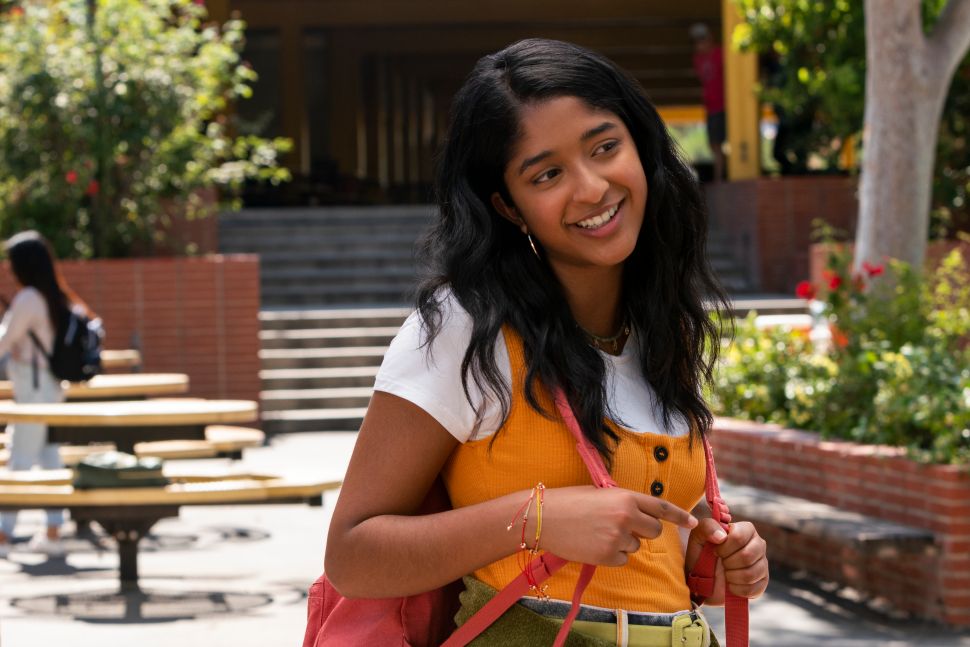