I have a friend who works at a major grocery chain with which you are probably familiar—it’s one of the stores to which panicked New Yorkers flocked during the early days of the coronavirus crisis. I last saw this friend a week or two ago, from a respectable six feet away. They’d just received a coronavirus-related raise: two dollars extra an hour. It sounded OK, until I did the math. “So you’re exposed to hundreds of people a day, who touch everything in the store, who may or may not be sick, and you get an extra eighty bucks a week?” I asked. My friend nodded (they asked not to be named for this article out of concern that speaking to the media might jeopardize their job). They’re still going into work… riding the subway and walking into what could be a virus factory. Their daily reward for this, after taxes, wouldn’t cover a take-out meal.

The worst place to be right now in the coronavirus pandemic, from an epidemiological standpoint, is most assuredly a hospital. The second-worst place could very well be a grocery store, where the social distancing directives citizens are urged to follow in order to “flatten the curve”—and stop the flow of COVID-19 patients into hospitals—are hard to maintain.

As grocery stores in New York and elsewhere are forced to temporarily shut down after employees get sick, labor organizers are starting to make stronger and stronger demands for working conditions to improve.

Yet we still aren’t allowed to wear masks at work, and some Captains haven’t even told their crews they’re allowed to wear gloves now despite a company-wide memo lifting the no-glove policy.

“We estimate that in our area, in a typical eight-hour shift, a worker is exposed to about 500 people a day,” Jim Araby, a union organizer with United Food and Commercial Workers Local 5, which represents employees at Safeway and other grocery and drug stores in the Bay Area, told Observer on Monday. “That’s 2,500 people a week. And since our testing lags incredibly far behind most other states, no one knows how much they’re exposed.”
“Essential” workers, doing deliveries and stocking shelves and keeping what’s left of the economy and the country running as, know this. They also know that neither the $2 extra an hour nor the stimulus bill passed by Congress and signed into law by President Donald Trump last week—which specifically exempts nearly all of them from any special sick leave benefits—is doing enough to help.

Just like healthcare workers, they know they’re being asked to show up to work without adequate cleaning and personal protective supplies. And they’re starting to feel the need to respond, staging strikes and walkouts and making demands that those of us ensconced safely at home would call reasonable.

On Monday, after a worker at an Amazon warehouse in Staten Island tested positive for coronavirus on March 11—and the company failed to provide masks or gloves to everyone else—more than 100 of their coworkers walked off the job.

Christian Smalls, an assistant manager at the warehouse and the walk-out organizer, told reporters that nine more workers at the warehouse tested positive for coronavirus, raising questions about both the safety of working conditions there—and the safety of cardboard boxes deposited the doorsteps of those who can shelter in place. Smalls was fired by Amazon shortly after the protest, and his dismissal is now under investigation by New York City.

Some employers have responded. Others have not, or not done enough.

“We see some employers do the right thing,” Alexander Colvin, dean of Cornell University’s School of Industrial and Labor Relations, told former New York Times labor reporter Steven Greenhouse, “and others not doing much at all.”

That leaves it up to elected officials—and the workers. States attorneys general have written directly to Amazon CEO Jeff Bezos, criticizing his company’s sick-leave policy as grossly inadequate (in other words, a threat to public health).

Instacart workers and shoppers alike were both urged to halt using the service on Monday during a combination strike/walk-off organized by Gig Workers Collective. The mere threat of a strike compelled Instacart to adjust its tipping policy and start providing hand sanitizer free of charge to workers. However, the company’s refusal to address hazard pay—and the realization that the company could very easily source hand sanitizer, but just hadn’t bothered—meant the strike was still on.

Other labor organizers and worker-advocacy groups are trying to use the moment. One organization representing a collective of workers at Whole Foods organized for workers to call in sick en masse on Tuesday, in protest of both working conditions as well as inadequate compensation and hygienic practices.

It’s hard to think of a time when workers stocking shelves, doing deliveries, and packing Amazon boxes have enjoyed more power, but there’s a very delicate balance. “Right now, the public is on the side of a lot of these workers,” Araby said. But if a strike should interrupt on-edge families’ access to food, that goodwill could evaporate. “We don’t know where that line is.”

As grocery and Amazon workers fall sick and head to overcrowded hospitals, where they will compete for beds and vital equipment with other members of the public who may have gone to their stores and used their services. As the grocery store to hospital pipeline continues to flow, the line will keep moving. 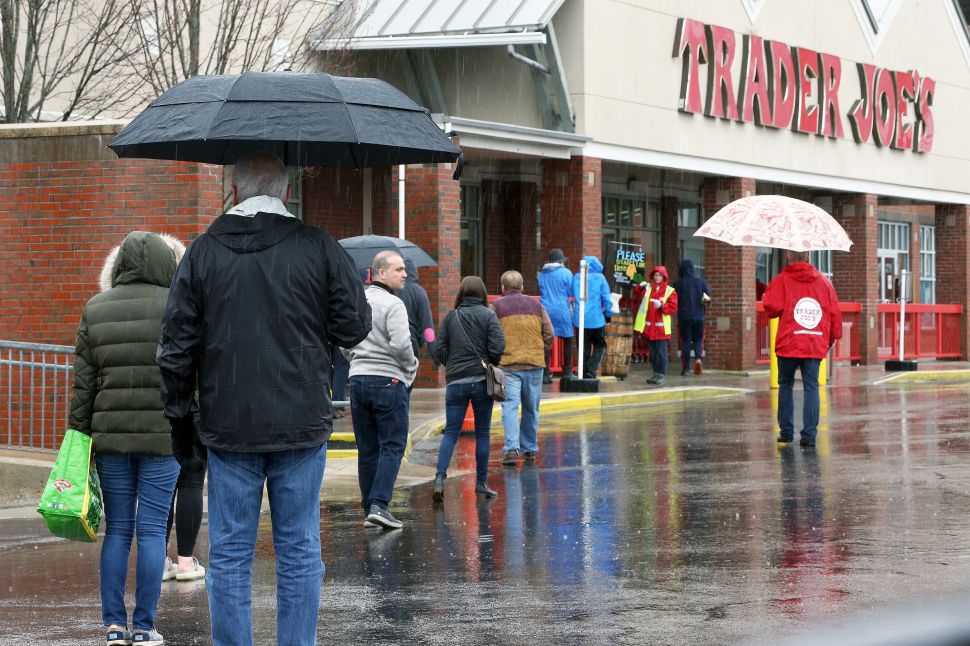