Reminiscent of citizen contributions in the days of WWII, collectives of Americans are quickly organizing to provide medical supplies requested by doctors through efforts like GoFundMe. Keep Breathing NYC is one of those organizations, founded by artist and PBS AllArts host Angel Pai, designer Philip Sweeting, and architect Timothy Phillips, with the purpose of creating a short term solution for the dire shortage of ventilators—3-D printed ventilator splitters to help hospitals bide the time until they receive new shipments of oxygen machines. But before the noble designers will be ready to see these products put to use, there’s one phase they’ll have to hurdle: indemnification.

It all began just two weeks ago when a friend shared one of Sweeting’s splitter designs on Facebook. Pai noticed the simplicity of the design and, because of her background in medicine prior to becoming a jewelry designer, knew enough to reach out to Sweeting and ask questions. After finding out that Sweeting’s design had been lab tested, Angel created a post seeking other designers who had 3-D printers. In five hours, she had someone who could print for her (now a member of her team, William Cheung), medical contacts, and a contact to the mayor’s office.

Hundreds of people flooded her inbox volunteering their companies and printers, as well as help with administrative tasks. After raising over $11,000, going through many rounds of feedback from medical specialists, and four prototypes, they’ve settled on a two way splitter design with a valve to control air pressure, offered as part of their public files shared on their website. But today they sit at a legal standstill until hospital administrators sign what’s called a Hold Harmless Agreement.

Due to the oxygen machine’s ability to measure the condition of only one body at a time, the risk for complications with splitting ventilators is higher, so they have only been used during dire circumstances such as the aftermath of the 2017 Las Vegas shooting. And yet, doctors from dozens of hospitals in New York City and all areas of outbreak—including Elmhurst, Maimonides Medical Center, New Rochelle Montefiore, Brooklyn Methodist Hospital, Overlook Medical Center, and Mount Sinai West—have been personally requesting these ventilator splitters made by Pai and her team. “Since 3-D printed materials are very porous, they can’t be re-sanitized or re-used. Hospitals won’t take this equipment without FDA approval but it’s the doctors, not hospitals, who are requesting our help because they have no other choice,” explains Pai. “We’re essentially saying to them, here’s a premade piece with a valve that helps you. It’s only meant to sustain for a short period of time and as a last resort.” Still, as the influx of overwhelmed hospitals only progresses, medical restrictions have been readily loosening to the point that Americans are now seeing their dermatologists and dentists filling in the frontline of desperate ER rooms.

Pai and her colleagues remain hopeful. “It’s a thing where if there’s enough pressure from the media and hospitals, the government will have to pass a law to expedite this. Why the standstill if doctors are requesting it but we can’t provide it?” In the interim, there are two other design projects the organization is focusing on, using the money they’ve raised as well as guidance from filtration experts. One that’s currently being developed is the PAPR (or powered air-purifying respirators)—reusable helmets connected to a filtration system that can also be sanitized—and the other, an intubation box that acts as a protective barrier between frontline workers and patients. The good news is, these two projects won’t require FDA approval once complete and can be delivered for immediate use once made (and sanitized). In addition to their open share design files, fabricators can also find on their website a “medical request form” to be connected to a designated hospital or medical center to help.

This week, the organization filed themselves as a nonprofit and continues to work with a network of volunteers, artists, and medical experts to heighten their cause. “As an artist and maker, it’s been so rewarding to realize all it took was one spark for so many creatives to step up, says Pai. “We’ve all been supplementing each other but managing hundreds of other ideas that keep coming up. Maker studios, designers, companies are all offering to step up and everyone has one mission. To try and save lives.”

Update: Elmhurst Hospital has approved the use of Keep Breathing NYC’s ventilator splitters, which will be on hand at the hospital as of April 14. 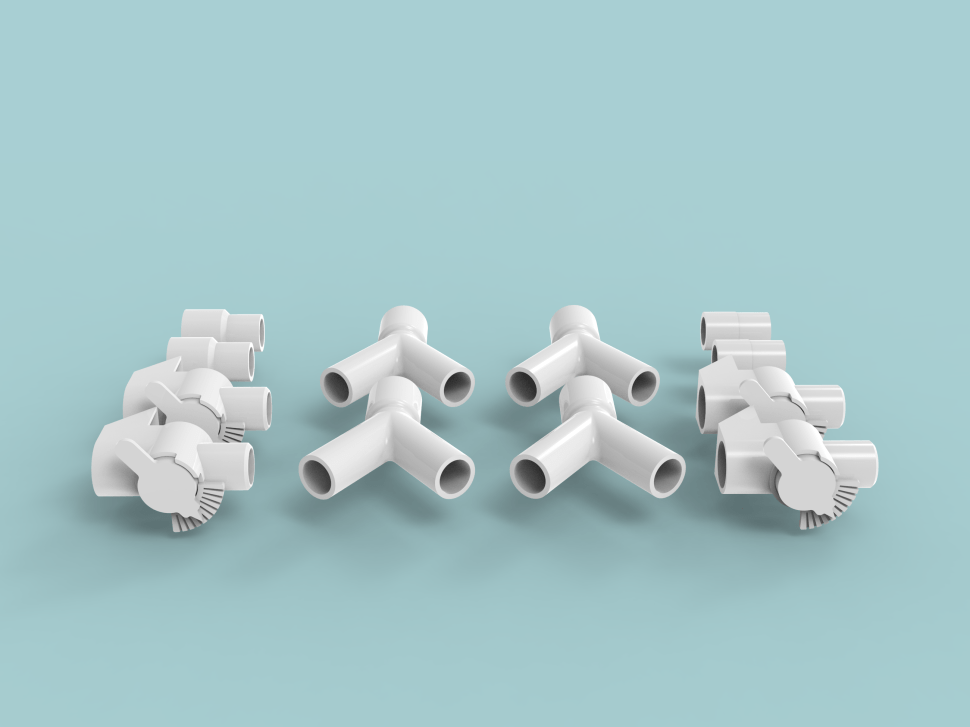