Well, Dolores (Evan Rachel Wood) went and done did it now. The first phase of her master plan finally came to fruition in tonight’s episode of Westworld, “Genre,” and boy howdy it sure was a doozy. To plant the first seeds of chaos that would eventually unmoor the human race, our virtually indestructible, genius-level vengeance robot…sent everyone an email. That’s right. After years of build-up, Phase I was a strongly-worded email to everyone on the planet complete with their data profiles courtesy of Insight. Hmm.

(Side Note: “Genre” gets its title from a party drug that shuffles its users through different Hollywood tropes such as noir, romance, action, etc. It’s meant to creatively reveal different truths for Aaron Paul’s mis-used character, but it’s not Westworld‘s fault that its network sibling Watchmen did this better just a few months ago).

One of the weakest links of Westworld‘s undeniably entertaining yet ultimately flat third season is the insistence of truth rather than the explanation or display of it. Time and time again, the audience has been given vague platitudes about human behavior and nebulous conversations regarding “data” to establish its importance and justify Serac’s (Vincent Cassel) plan to essentially decide humanity’s fate. And yet, we’ve never been given a single shred of evidence that the predictive algorithm everyone is so up in arms about actually works. Sure, “Genre” provided a bit of an origin story for Serac (in episode five of eight for the season). But it feels too little, too late.

We’ve been told, not shown, which makes the central conflict of Season 3 a logical leap for audiences. This then undercuts the final act of “Genre” in which society very rapidly begins to devolve into chaos all because of Dolores’ spam. If we don’t believe in the power of Insight’s data, why would the fictional world be so bound to it when they weren’t even aware of the system to begin with? The societal breakdown is meant to be profound, but it comes across as unintentionally hilarious. It feels like empty science-fiction as opposed to the educational or insightful nature of The Martian or Ex Machina.

“The right information at the right time is deadlier than any weapon,” it’s said during the episode. That’s absolutely correct, which is why it’s surprising to see Westworld ignore its own advice. The philosophical questions raised by the deterministic strategy cooked up by creators Jonathan Nolan and Lisa Joy are undeniably fascinating. Human nature, free will, personal agency, the parallels between humanity’s invisible loops and those of the hosts. That’s all rich thematic ground that is going relatively untouched in favor of a more streamlined exhibition.

Serac says that a population of outliers throws the system out of whack, which is why he’s been “collecting” them like a deranged zoologist. He’s killed and manipulated his way into a position to set the future for the entire globe under the guise of heroically saving us from ourselves. He’s likely the greater evil that brings our characters to a temporary alliance. That’s an interesting development that is worth exploring. But on a longer timeline for the show, it’s clear that Westworld operates at peak efficiency when Dolores, Maeve (Thandie Newton), and Bernard (Jeffrey Wright) are challenging one another’s ideologies and not necessarily their survival.

The upscale steampunk world of Season 3 is a still a treat to prance around in. That epic car chase again displays the show’s capable command of creative carnage and its deft understanding of comedic beats. I’d watch a weekly digital spinoff series about the hi-jinx Lena Waithe and Marshawn Lynch’s characters get up to in a heartbeat. But I’m tired of Westworld talking at me rather than to me. 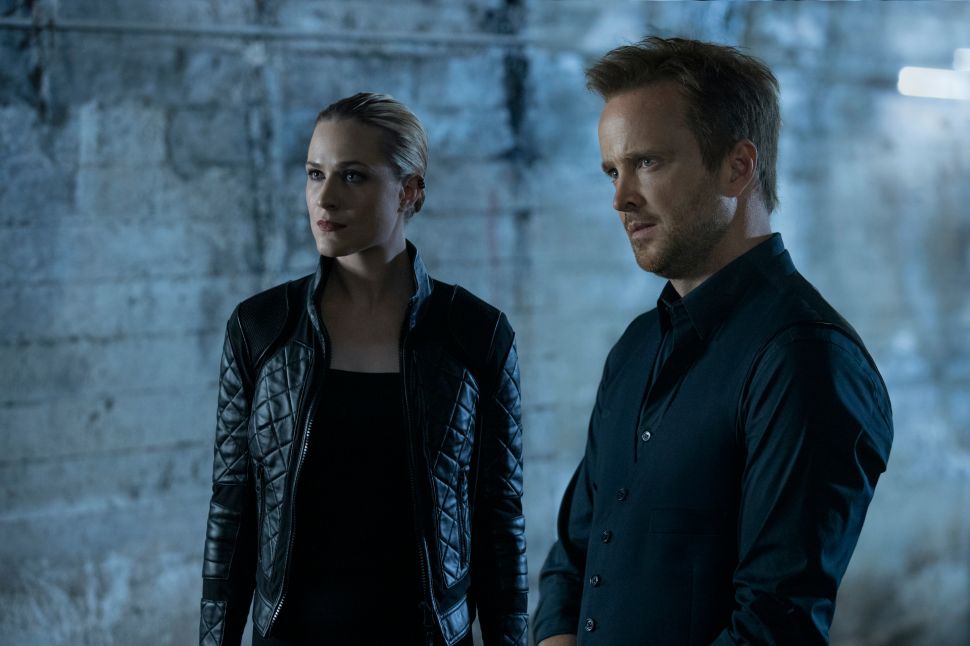