With coronavirus lockdowns in effect around the world, many of us are stuck at home for extended periods of time. The silver lining is that this blesses us with more chances to indulge in bingeing content than ever before. And while new shows are still premiering at a relatively steady clip for now, sometimes you just can’t resist the warmth of an old classic. There are so many funny, uplifting TV series that have had long, multi-season runs that are available to watch now. All of them make great potential candidates for bingeing.

Of course, the lockdown has isolated us and left the world in sheer uncertainty as to what the future holds, so we all need things that can make us feel better. We want to pass the time, and we want to feel good, and what better way to make both those things happen but to watch some long-running and happy TV shows? Enjoy.

SEE ALSO: The Final Arc of ‘The Clone Wars’ Is the End of an Era for ‘Star Wars’

“Sometimes you wanna go, where everybody knows your name…” Relatable, right? Starring a young Ted Danson, this NBC show depicted the daily lives and shenanigans of the regulars of a Boston bar, Cheers. Known as the original hangout sitcom, this show will help you cope with missing hanging out with your friends at the local bar.

Parks and Recreation made its mark in television history as one of the greatest workplace comedies of all time. It is a wholesome show with a great cast and commentary on politics hidden under several layers of comedy. If you miss your office friends, this might be the one to watch. The show even had a quarantine reunion special air this week that you can check out after you finish binging the series.

Modern Family depicts the adventures of a big family that manages to stick together and coexist, resulting in some solid television. Many of us are locked in with our families, loving or hating it, while others are away from them and missing them. Either way, Modern Family will give you a fresh perspective on the situation and more than just a few laughs. The series recently wrapped up its run, and now is a better time than ever to binge it.

Bob’s Burgers is an animated series about a family-run restaurant that is much funnier than one would expect it to be. Be it the challenges of running a restaurant or raising three very eccentric children, all of whom have their own little adventures—the show never has a dull moment. The series is currently running and even has a movie on the horizon.

Malcolm in the Middle

Memorably once described as a socialist masterpiece, Malcolm in the Middle stars a pre-Breaking Bad Bryan Cranston and Frankie Muniz at the peak of his popularity. The show follows a middle-class family amidst the chaos that comes with raising four boys. The show encompasses the spirit of the early 2000s very well and is truly worthy of a binge watch in a time where we desperately miss the “normal life.”

Stream Malcolm in the Middle on Hulu

Baking is helping a lot of people bust their stress right now, but if you’d rather watch people bake than do it yourself, The Great British Baking Show (originally known as The Great British Bake Off) is the show you should settle into. There’s something magical about watching amateur bakers face off and evolve while making some delicious looking pastry. Caution: May make you want to bake.

Doctor Who is a sci-fi show about the adventures of a time-traveling extraterrestrial being. The franchise began in 1963, but has had a fragmented run, with some episodes from the show’s older series even being lost. I’m recommending the 2005 revival of the series for this list—which brought a fresh generation of British talent to the franchise. It is also the more accessible version of the show and is easier to binge.

With 31 seasons in the bag and no plans to slow down now that it’s a Disney property, The Simpsons is an all-time classic that will keep you connected to the real world with its witty commentary and overflowing pop-culture references and cameos. The best episodes of animated series always has a wholesome feeling, so binge watching this show will be a breeze.

Whatever happened to predictability? is a question we find ourselves asking quite a lot lately. Catchy theme song apart, Full House is an excellent depiction of parenthood and family, and the show still holds up to this date. If you want more of this family after finishing a binge watch, Netflix even has a sequel series called Fuller House featuring most of the original cast. Also, Bob Saget is an absolute gem on TikTok, so you’ll never have a dull time with this fandom.

Scrubs nails the seemingly impossible task of turning a medical setting into one of the funniest shows of the millennium. The series had a great cast that is still keeping the fandom alive with a podcast, and the cultural importance of Scrubs goes so far that it inspired the Fortnite default dance we all know and hate. A feel-good watch, and yet another show in this list that has a theme song relevant to these times: “I can’t do this all on my own, no, I know—I’m no Superman!”

That ‘70s Show delivers perfectly on the title, doing a great job of placing you in what is known as one of the best decades in history. A star cast that seems like it would be nearly impossible to assemble today, and its classic “hanging out, down the street” feel makes this show a genuinely relaxing watch. Your frustration will also occasionally find an outlet in Red Forman’s recurring foot in the ass comments.

Stream That ‘70s Show on Netflix

Shark Tank is a thoroughly entertaining reality show about the innovative power of the human race—something we’re all relying on right now. While there are frequent ego clashes between the billionaire judges, Shark Tank, the success story snippets of past ventures that were funded on the show add a nice touch to the experience. 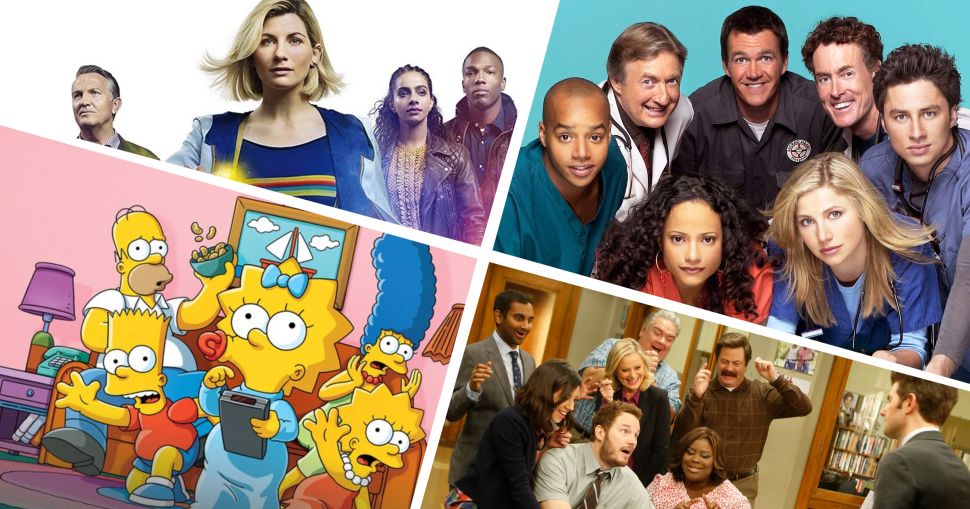