Quarterly earnings are usually nerve-wracking events for investors in the plant-based “meat” company, as share price tends to fluctuate quite wildly around each announcement. In the past four earnings releases, the vegan burger maker’s stock moved an average 20 percent, up or down.

Today’s earnings report is a particularly important event, as Wall Street looks for numbers indicating how the hot startup fared during the initial stage of the coronavirus outbreak. Analysts expect to hear key executives discuss where the company stands in the ongoing pandemic, especially with a nationwide meat crisis looming.

Analysts on average are expecting sales of $87 million and a net loss of 8 cents per share for the first three months of 2020. Activities in options markets suggest that traders expect the stock to move at least 15 percent in either direction after Tuesday’s report, according to Barron’s.

Beyond Meat’s stock has already gone through plenty of volatility in the last six weeks. In mid-March, as the first wave of COVID-19 hit American soil, Beyond Meat shares tumbled more than half from its February high of $126 to under $60. But then, in April, it quickly jumped 45 percent back to over $100 on the good news that the company had struck a lucrative deal to sell its products in thousands of Starbucks in China, where normal economic activities were just opening up from a two-month national quarantine. Stock is currently trading at $98.

It’s tricky to get a plausible estimate of how the coronavirus has really affected Beyond Meat’s sales. The company sells about half of its products through restaurants and the other half through grocery stores. Due to the pandemic, eating at restaurants has declined sharply, but grocery consumption has grown significantly.

Wall Street in general aren’t bullish on Beyond Meat’s short-term prospect. Less than 20 percent of banks covering the company have a “buy” rating for its stock, per Barron’s.

Wells Fargo, for one, recommends clients to dump the stock as soon as possible, saying Beyond Meat’s meat alternative products are too expensive to stay viable for consumers amid an economic downturn when most restaurants are closed. This despite traditional meat producers, including Tyson Foods, having a hard time supplying enough products to the market.

“Our more cautious stance is driven by expectations for much softer foodservice demand in 2020 and sharply eroding economic conditions that risk demand for premium-priced plant-based meat at retail,” Wells Fargo analyst John Baumgartner wrote in a note on Friday downgrading the stock from “hold” to “sell.”

“Beyond Meat is one of the latest cult stocks to capture the imagination of investors,” Robert Johnson, a finance professor at the Heider College of Business at Creighton University, told Observer.

“I can hear value investors like Warren Buffett saying that, while plant-based protein may indeed be a huge trend in food sales in the future, the fundamentals of the company are precarious, because there is no moat with the product,” Johnson added. “The bottom line is that you may want to consume a Beyond Meat burger but refrain from buying the stock.” 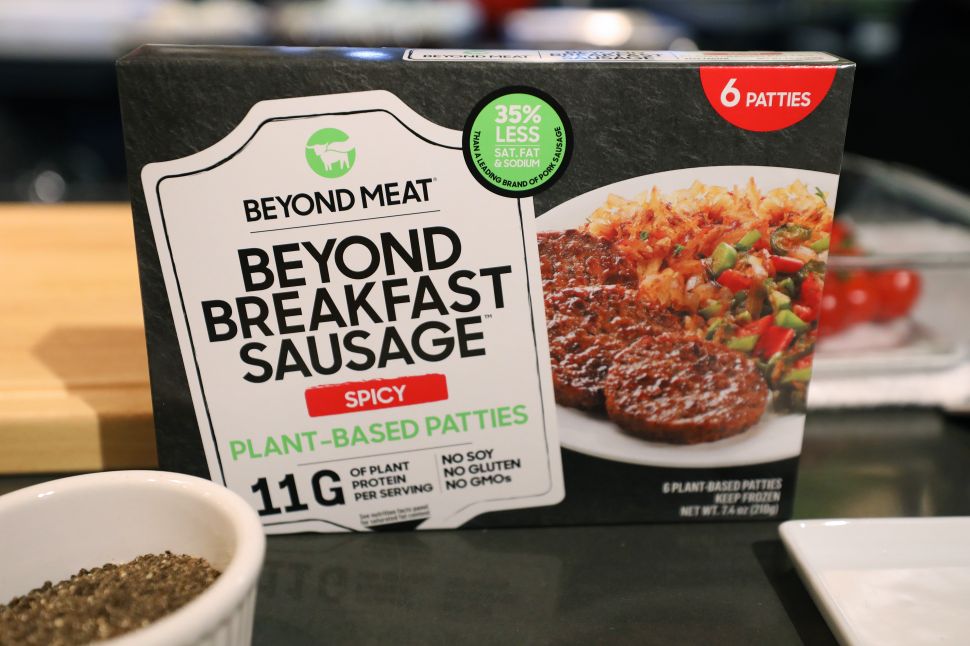