After almost 30 years in the national spotlight, Hillary Rodham Clinton has been the subject of countless books offering equal parts scrutiny and adoration—more than possibly any other American political figure. Taking a look at Curtis Sittenfeld’s 432-page novel entitled Rodham, it’s very easy to ask the obvious question, what more is there to learn about Hillary? Instead, Sittenfeld presents another question: What more can we learn from Hillary?

Speaking with Observer about the origins of her novel over the phone from her home in Minneapolis, Sittenfeld reflects, “In early 2016, an editor from Esquire magazine reached out to me and asked if I’d be interested in writing a short story from the perspective of Hillary Clinton on the night that she accepted the Democratic nomination for president.” While Sittenfeld has enjoyed both critical and wide commercial success since the 2005 publication of her first novel, Prep, Esquire’s request was informed by another reason.

SEE ALSO: ‘Shortlisted’ Is the Story of 9 Women Who Would Have Changed the Supreme Court

“Because I had written American Wife [Sittenfeld’s best-selling 2008 novel] and it was loosely based on Laura Bush, I’ve been asked a few times to write essays about Hillary and I had declined because I didn’t feel like I had any insightful analysis to offer. And then when I was offered this short story assignment, I thought, oh my god, I don’t have to write about how Hillary looked to the American people, but how did the American people look to Hillary. It turned out to my own surprise that I had a lot to say.”

Her interest in the inner thoughts of Hillary Clinton didn’t fade with this short story. Sittenfeld continued, “After that experience of writing from the point of view of a fictional Hillary, and after the 2016 election, I had this slow realization that grade school children were largely aware of the presidential candidate Hillary Clinton, but they often literally didn’t know who Bill Clinton was. I was fascinated by that and thought, ‘What would it be like if adults saw Hillary as totally independent from Bill in the way that kids do?’”

It was in March 2017 that she decided to write the novel. She admits, “In some ways, it was a way of processing the 2016 election, which, as a Democrat, troubled me. And I remain very troubled,” Sittenfeld reflects. Yet this is not a book for someone who is looking for gossip or more historical facts about the election cycle. Rodham reveals the limits of American political ambition for women while cloaking the reader in the anxiety, drive and neurosis of a generation of women who were the first to break through an incredible number of glass ceilings. Frankly speaking, it’s also a compulsive page turner that hinges on the supposition: What if Hillary Rodham never married Bill Clinton?

I can admit that I was prepared for Rodham to read like fan fiction and was OK with the possibility of it. What surprised me is that such familiar stories (the passionate and brainy Yale Law School romance of Bill and Hillary, her potentially destructive move to Arkansas, among others) felt fresh. Sittenfeld doesn’t serve up details as do other writers whose baggy backstories derail the pacing. The restraint that she wields is one she’s always possessed: a keen ability to sharply tell a story from the eyes of an outsider. From this perspective, the reader witnesses Rodham’s life from Yale Law School onward through the behavior, drive and moral questions that push and pull this young woman we all think we know so well.

While readers come to the book with an awareness of Hillary’s story as well as the arc of the second wave of the women’s movement, Sittenfeld makes palpable the motivations, actions, and responses that guide Rodham. Like others, she’s a woman before her time, tasked with the choice of sharpening her resolve and realizing her potential or sublimating her desire into a marriage. That question of sacrifice—to be loved and seen for your mind and ideals with the caveat that his ambition will always come first—haunts the book. A tactile awareness of this moment in history invigorates this well told tale. All these years, I’ve wondered what sharpened the drive of an idealistic young woman. Was the momentum of her partnership or did she have that motivation all along?

As the book—yes, a novel, you keep reminding yourself—steps through the looking glass, skirting the narrative of one Hillary Rodham Clinton to center squarely on Hillary Rodham, Sittenfeld’s choices show a path that seems almost more plausible. The further the book strays from history, the more you balk at the idea that this brilliant woman would have chosen a cheating boyfriend who expected her to throw over her career opportunities for a teaching position at the University of Arkansas. What’s love got to do with it? Their story isn’t over just because they broke up.

After a failed presidential run in 1992, Bill Clinton divorces his first wife and becomes a powerful figure in Silicon Valley. After she leaves Arkansas, Rodham becomes a law professor at Northwestern University, not far from her family. However, she’s the one who makes the first successful jump into politics, becoming a U.S. Senator from the state of Illinois. Her political career eclipses that of Carol Mosley Braun, who was in fact the first African American Woman Senator. The political leaps that Rodham makes throughout the course of the book reveal not only her ambition, unencumbered by Clinton, but also the work of race, privilege, and gender. Try as she may, even without Bill, like most women, she still faces the brick wall of the patriarchy. Yet the loss of a valued mentor and friend (modeled on Clinton’s former boss and mentor, the founder of the Children’s Defense Fund, Marian Wright Edelman) is the price Rodham must pay when she ignores the issue of race. Sittenfeld doesn’t shy away from noting the lack of intersectional feminism in the 1990s and it’s that lack of unity that also drags down women in power.

Returning to these facts again and again, Sittenfeld doesn’t flinch from the uglier side of politics and society. While the plot’s twists and turns offer great pleasures and cringe-worthy moments, the book would not have come together without the larger work of establishing a believable atmosphere of the intellectual strengths, emotional pitfalls, and flexible idealism of baby boom era women in America. The work of a novel allows for a nuanced examination that may not surface in a political memoir or a nonfiction tome. Sittenfeld herself admits, “The reason I like to write fiction is that there is so much ambiguity and so many contradictions.” She’s adept at capturing that subtlety through extensive research that’s then put into play in the realm of fiction.

What makes these efforts worth the time is that the focus isn’t so much on accuracy of facts, but on feeling. Sittenfeld reflects, “One of the reasons that I like to do research is that it often makes the work much more interesting.” Rather than depend on a checklist for historical accuracy, research makes her almost more open to surprise. “The reality of life sometimes is less dramatic than what I would have made up, but it’s actually more interesting. It has the texture of truth that rather what I would have made up wouldn’t have had even though I could have made it up to be juicy.” Sittenfeld has the appetite of a journalist. “I’m very resourceful about tapping into my network. And people have been incredibly generous to me when I ask, ‘Can I interview you for 20 minutes?’”

Rather than attempt to interview associates and people intimately familiar with Hillary Clinton, Sittenfeld instead interviewed female law professors of various ages including some who were Hillary’s age and also attended a Seven Sisters college as did Hillary. Walking through the experiences of women of these professions and generations allows Sittenfeld to trust her fictional impulses while also creating a believable world for her characters.

This authentic tone is also what gives the reader such an incredible sense of catharsis while reading the book. It catches you off guard. While you’re obviously not reliving the 2016 election (you’ll be surprised to see the way familiar faces surface in the book’s imagined 2016 debate), you’re reading the book through two lenses—fact and fiction. The reader’s internal interplay, along with Sittenfeld’s fleet-footed pacing and transitions, culminates with a complex range of emotions.

There’s a wistfulness to her book that demonstrated to me that perhaps the reason I’m not over the 2016 election is because I’m not ready to give up on the dogged determination of women who came of age in the 1970s. Landing upon a bittersweet catharsis wasn’t what I expected. It’s telling that I tore through this novel while I’ve yet to read Hillary Clinton’s What Happened. What I’m looking for is something beyond riffling through the still baffling facts. Sittenfeld observes, “The older I’ve gotten, the more uncomfortable I am writing essays or opinion pieces. I think that a novel is kind of the opposite of a single sentence argument about anything.” Weaving fiction from a history that no one necessarily thought needed to be retold, Sittenfeld stretches our imagination to see that by captivating us with this powerful novel, we’re not ready to give up on Hillary or other challenging women—including ourselves. 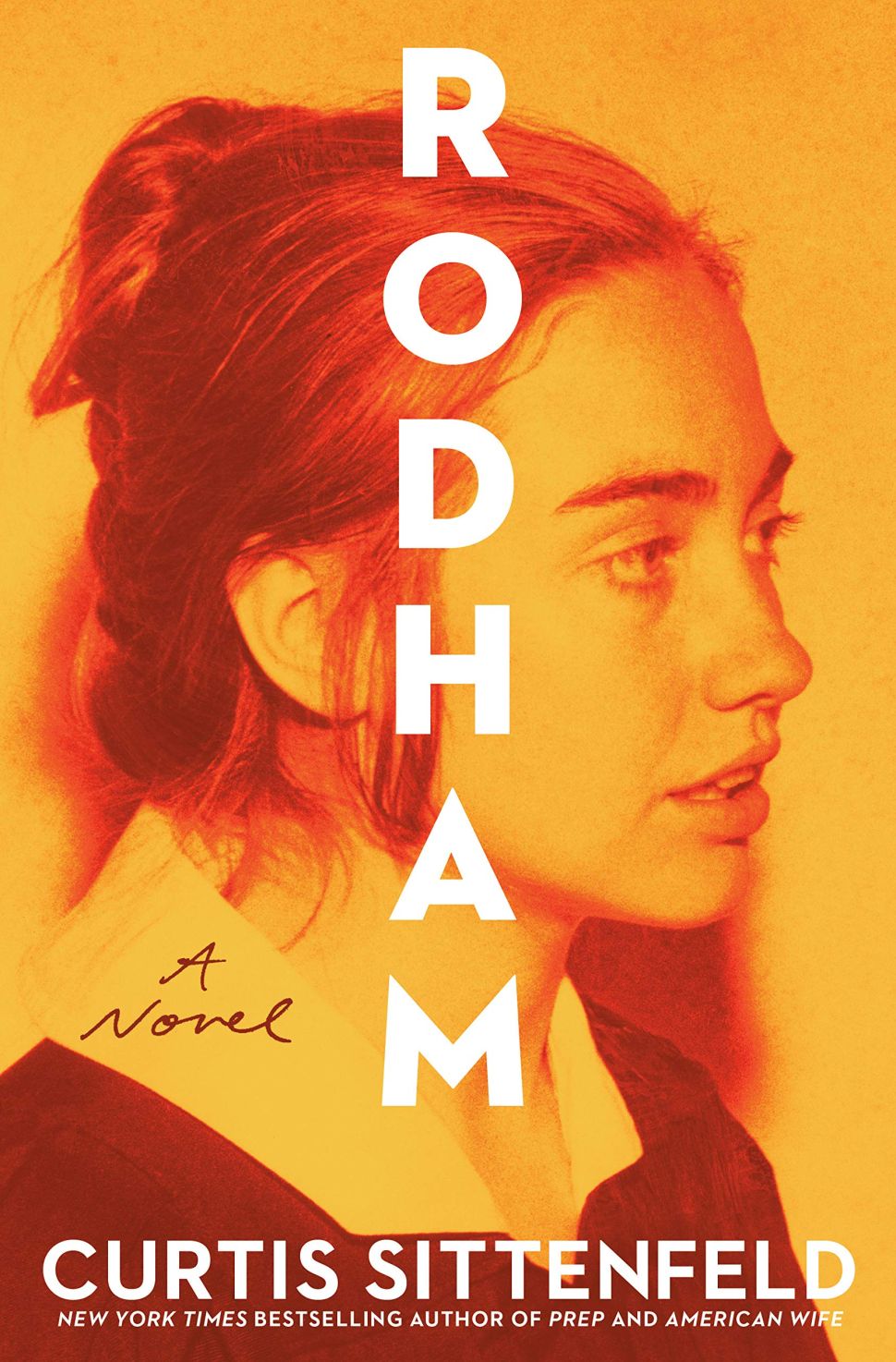