Kate Klonick, an assistant professor of law at St. John’s University and an expert on freedom of speech and the internet, initially posted a copy of the order, which was titled “Preventing Online Censorship.” The text was confirmed by outlets such as Reuters, which also saw a copy of the order on late Wednesday night.

Trump’s executive order takes aim at what he’s called social media platforms’ infringement on freedom of speech and asks the FCC to examine and then propose adjustments to regulation under Section 230 of the Communications Decency Act. Section 230 protects online platforms from liability for what their users post online; by adding something such as a “fact check” to a post by a user, Trump’s order contends, Facebook and Twitter are engaging in the act of editorializing, which could cause them to lose their exemption.

Trump’s order could make social media platforms more liable for what users post and how they handle it, possibly subjecting the companies to more lawsuits. The American Civil Liberties Union said that it does not believe Trump has the authority to adjust the interpretation of the law.

“Much as he might wish otherwise, Donald Trump is not the president of Twitter. This order, if issued, would be a blatant and unconstitutional threat to punish social media companies that displease the president,” the American Civil Liberties Union noted on Twitter.

The president has no authority to rewrite a congressional statute with an executive order imposing a flawed interpretation of Section 230.

Section 230 incentivizes platforms to host all sorts of content without fear of being held liable. It enables speech, not censorship.

The order comes after days of Trump’s boiling outrage over Twitter’s decision to append a fact check to his verifiably false tweets about voter fraud; the note urges people to “get the facts” and links to a Twitter Moments page with stories about Trump’s false claims. He spent much of Thursday raging about the decision and alleging that his free speech had been violated. Trump also went after a specific mid-level Twitter employee said to have involvement in the decision, siccing his 80 million followers on him.

Twitter’s decision was the first step it’d taken against Trump’s tendency to spread misinformation and came as the company was asked to take down several of the president’s other posts, fanning the flames of a debunked conspiracy theory about the 2001 death of an employee of then-Rep. Joe Scarborough, who now is an MSNBC host is often critical of Trump’s behavior.

Republicans feel that Social Media Platforms totally silence conservatives voices. We will strongly regulate, or close them down, before we can ever allow this to happen. We saw what they attempted to do, and failed, in 2016. We can’t let a more sophisticated version of that….

Trump’s executive order specifically mentions Twitter, Facebook, and Google, though he seems to be less angry with Facebook at the moment. On Wednesday, Facebook co-founder and CEO Mark Zuckerberg responded to Twitter’s new fact check by swearing off doing the same, saying, “I just believe strongly that Facebook shouldn’t be the arbiter of truth of everything that people say online.” Trump later retweeted a news post about the comments.

In response, Dorsey said that the fact check was part of a larger attempt to clear misinformation out from the platform.

“This does not make us an ‘arbiter of truth,'” Dorsey said in a tweet. “Our intention is to connect the dots of conflicting statements and show the information in dispute so people can judge for themselves. More transparency from us is critical so folks can clearly see the why behind our actions.”

Still, the executive order focuses on the companies’ work with the Chinese government. China is a frequent foil for the president, both on the trade front and in the wake of the coronavirus pandemic. In particular, the executive order suggests that Twitter has allowed Chinese officials to use its platform to “undermine pro-democracy protests in Hong Kong.” Twitter also placed a fact check marker on tweets from the Chinese government about the issue.

Facebook and Twitter have been widely criticized for allowing Russian bots and right-wing disinformation to flourish on their platforms, a lax enforcement that many believe helped Trump win the presidency. He has called that theory a hoax. 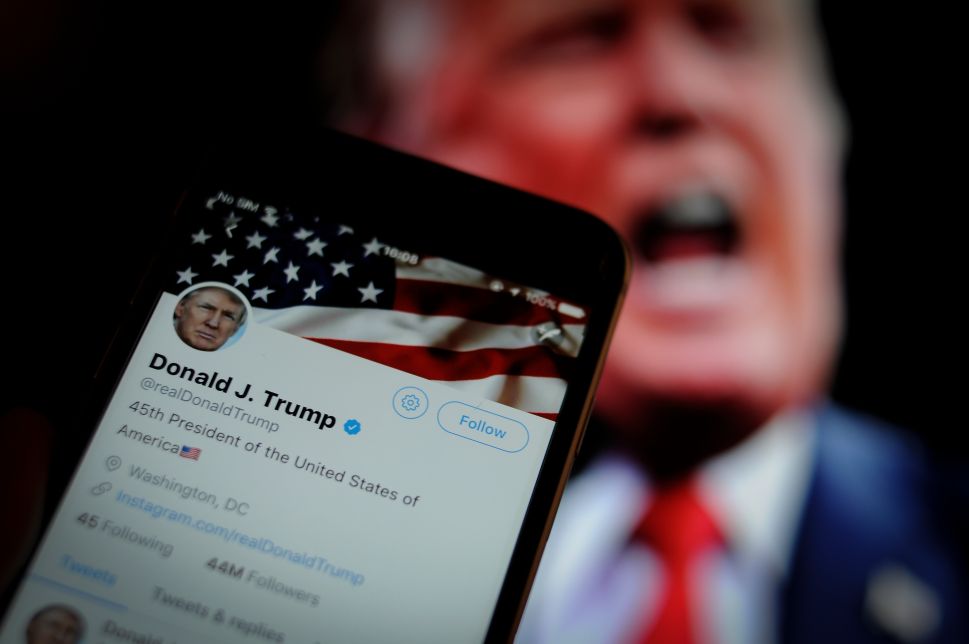