While practicing social distancing, creatives all over the world have gotten extremely bored of the same four walls and the lack of new exhibitions and gallery shows to visit. However, Jared Schiller, a filmmaker based in Woodchurch, Kent, appears to have solved that particular problem with his most recent project, which is a comprehensive art exhibition constructed in his own backyard. Due to the fact that human beings won’t be able to safely gather in large groups for a long time, Schiller has instead put on a show for his most reliable audience: his chickens. Starting in mid-April, Schiller used Instagram to ask for submissions to the exhibition, and received inventive contributions from popular and well-known contemporary artists like Amalia Pica, George Shaw and Richard Wentworth.

SEE ALSO: An Artist Made Human Versions of ‘Animal Crossing’ Characters and Twitter Loves It

For example, Schiller hung up a small printout reproduction of the painting Study for Garden by the artist Kes Richardson, and perspex sculptures by Jyll Bradley and a film by the choreographer Michaela Cisarikova were also included in the wide-ranging domestic showcase.

“Even before lockdown I was weighed down by the world and worried about the economy and the environment and everything felt incredibly serious and stressful,” Schiller told The Art Newspaper in an interview. “But as lockdown continued it made me think I wanted to reconnect with people, and I thought I’d do something that no one else is doing and so there would be no pressure because it can’t be compared to anything else. People could either do it if they wanted or ignore it if they didn’t.”

Unfortunately, given that the exhibition took place in Schiller’s backyard and that the artwork was fully accessible to the animals he owns, many of the printouts were promptly dislodged or destroyed by his unique audience. “I kind of wanted the chickens to have more time with the work,” he jokingly lamented on Instagram. 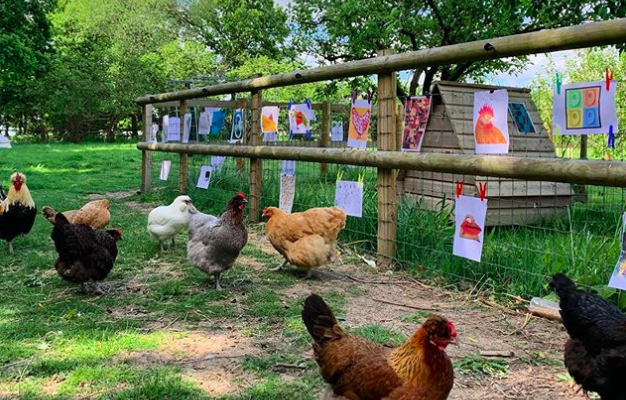