How does one pick a book to represent a city? Travelogues are too obvious, as are novels that personify places and turn them into characters. Consider instead the graphic novel, a form that’s able to capture the soul of a city in unusual ways. For travel lovers stuck at home, these titles might be as close as you can get to the feeling of escaping into an unfamiliar setting; of getting lost while exploring strange streets and capturing the excitement of being surrounded by a different culture or language. None of these titles are set in our own time. Instead, they focus on specific moments; some significant, others mundane. Until we can travel again, they are the next best thing.

SEE ALSO: The Best Books About Beethoven to Celebrate His 250th Birthday

It’s easy to look at Paris as the epitome of high culture today, but it wasn’t always welcoming to artists who refused to toe the line. Mozart found this out the hard way in 1778, when he spent a few miserable months in the French capital, trying to convince locals that his music was worth listening to. Duchazeau illustrates the locale beautifully, painting his protagonist as a small-statured, pockmarked anti-hero who often behaves like a spoiled juvenile. He also introduces a touch of the absurd while exploring Mozart’s relationship with his father. It makes for a great example of how comics can do what no other medium can.

Another time capsule, this one is set in the late 1900s in an England that has been taken over by a fascist leader named Adam James Susan. The only person standing between him and freedom is the mysterious figure known simply as V. To read anything by Alan Moore is to be exposed to a world of wonder that none of the movies based on his books have managed to replicate. What makes this book so relevant is that the fictional London it depicts is disturbingly close to what the United Kingdom is dealing with today.

Phnom Penh: Year of the Rabbit by Tian Veasna

One of the most important things to understand about the shaping of Cambodian culture doesn’t revolve around the presence of its magnificent Angkor Wat, but the bloody history involving the Khmer Rouge. Its reign was responsible for the murder of approximately 2 million people between 1975 and 1979, and this powerful, personal story bears eloquent witness to that dark period. Veasna was born into that world and watched the damage it inflicted not just upon his immediate family but on everyone he grew up with. There is sadness in these pages, but also humour and hope. The panels are spare, but what they depict speaks volumes.

New York: A Contract With God by Will Eisner

It’s easy to treat this work as a piece of comics history, given that it is the first of what would eventually come to be referred to as a “graphic novel.” Eisner passed away in 2005, but his shadow still looms over the work of artists the world over. A Contract with God is a set of four stories that take place in a New York City tenement populated by a cast of poor Jewish people. It documents a way of life long forgotten by one of the world’s great cities; The only thing that doesn’t get old is the struggles its characters grapple with.

The nicest thing Guy Delisle does when he travels the world armed with notepad and pen is what every seasoned journalist is trained to do: take notice. He doesn’t comment or interject personal opinions on anything and lets the setting, conversation or event he is chronicling do the heavy lifting. Often, it is simply while recording the everyday life and times of a place that he raises the biggest questions. This is a great book about one of the world’s most interesting cities and the various claims that have been made upon it for eons. Part travelogue, part memoir, it is an account of a year well spent.

The most astonishing thing about this book isn’t that it took two decades to create, it is that Jason Lutes had never visited Berlin before he began working on it. The period he chose to focus on is one that shaped the world we currently live in—the last years of the Weimar Republic and the terrifying dawn of Nazism. Lutes doesn’t simply give us a history lesson; he creates a world and populates it with characters we can all relate to, using their experiences to take us deep into the heart of what it meant to be German between 1929 and 1933. What it leaves the reader with is a sense of disquiet, as uncanny parallels between that Berlin and today’s United States start to emerge. 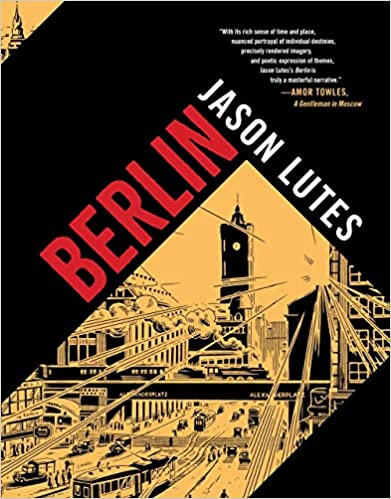