Hawaiian musician Israel Kamakawiwo’ole, also known as Bruddah IZ, would have been 61 today, a fact that Google is celebrating with a doodle and animated video honoring the musician, who is heard singing his rendition of “Somewhere Over the Rainbow” played on ukulele with a traditionally Hawaiian musical sound. Kamakawiwo’ole may have become best known worldwide for this song—which was recorded in a single take one evening in 1988 and did not gain popularity until after his death in 1997—but his accomplishments in music and advocacy are broad and left an indelible mark on Hawaiian culture.

Kamakawiwo’ole released 15 albums with the band he formed with his brother and three friends, called Makaha Sons of Niʻihau, before he died of respiratory, heart and other health issues at age 38. In addition, Kamakawiwo’ole, who was born the same year that Hawaii became the 50th state, was a supporter of Hawaiian independence, using his lyrics to urge for sovereignty as well as environmental protection of the islands’ natural wonders.

In honoring to the man who became known as the “Voice of Hawaii,” art director Sophie Diao was conscious of properly paying tribute to the land and culture that he not only loved, but fought to protect. In an interview about creating the doodle published by Google, she relates how her research and conversations with his producer, Jon de Mello, and widow, Marlene Kamakawiwo’ole, allowed her to integrate elements that were genuinely important to Kamakawiwo’ole, for example including the imagery of his favorite flower, plumeria, which grows abundantly in Hawaii.

“The Doodle is full of places in Hawaii that had special significance for Israel,” Diao said. “The sunrise at Diamond Head, Makaha Beach, the Palehua vista, the flowing lava and volcanic landscape of the Big Island, the black sand beach at Kalapana, the Wai`anae coast.” All can be seen in the video present for Google users in the U.S. and in parts of Europe on the search engine’s homepage today, which also pays tribute to Asian Pacific American Heritage Month in the U.S. 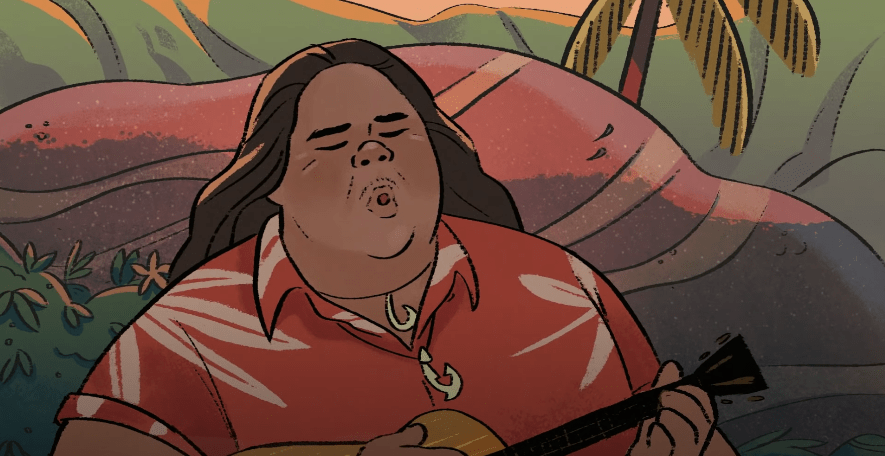