The game may have been broadcast during the dead of night, played over 5,000 miles away and featured players unfamiliar to even hardcore American fans, but more than a month into the coronavirus lockdown that has indefinitely suspended live sports across the world, opening day of the Korea Baseball Organization was greeted with excitement—and no shortage of curiosity—by baseball fans across the United States.

ESPN announced on Monday afternoon that it had reached a deal to broadcast games played by the KBO, South Korea’s top professional baseball league. Less than 12 hours later—including a half-hour rain delay that put first pitch at 1:30 am EST—two of the network’s announcers, watching and chatting from their homes, offered play-by-play and analysis of the action between the Samsung Lions and the NC Dinos. Played in an empty stadium in Daegu, with the canned buzz of fans playing like muzak through the PA system, the game had the feel of an early spring training exhibition matchup, but it represented a monumental moment in the business of international sports.

The success of foreign sports in the United States is not unprecedented. European soccer has developed a core audience in the US, thanks in part to its many international tournaments, superstar players and TV contracts on ESPN and NBC Sports. But with six months of daily games played in Major League Baseball, by far the world’s most competitive and prestigious league, there’s been little need for most American fans to regularly explore leagues half a world away. The pause on all other professional sports, with no obvious start date in sight and ESPN desperate for programming, has given the Korean league, enabled by South Korea’s massive success at containing the coronavirus, a prime (if not primetime) opportunity to grab the spotlight.

The league’s commissioner recorded a video address to American fans that ESPN broadcast on Tuesday, officially kicking of KBO’s efforts to promote its fun and high-quality brand of baseball to anyone willing to stay up into the early morning hours. It didn’t take long for K-Pop to earn a legion of young music fans in the United States. Could Korean baseball be next? The early returns are trending positive, with Google searches for “KBO” and “Korean Baseball” skyrocketing in the United States over the last month as training camp resumed in Korea and rumors of a TV deal began to surface.

“While the obvious impact of not having fans in the stands will financially hurt the league and teams, the long-term impact this ESPN TV deal could have on the league and teams is huge,” Dan Kurtz, who runs the popular English-language fan site MyKBO.net, told Observer. “While terms of the TV deal with ESPN were not released, KBO broke its own record for domestic TV deals last year. Due to very little live sports being played on TV in the USA, MLB executives and more will be watching the KBO closer than they have ever done before.”

What those executives and baseball-starved night owl fans will find is a game that looks quite similar to the MLB product, with some notable differences in rules and on-the-field tactics. The KBO, generally considered the third-best league in the world, after only MLB and Japan’s Nippon Professional Baseball, is known for raucous and devoted fans and on-field dramatics. Fans play drums and sing fight songs throughout the game, and while they will be absent for at least part of this season—banners with images of fans have been placed throughout the stands, like a scene out of an old movie that needed more extras—the players are just as effusive.

First and foremost, players are allowed—and at this point, actively encouraged by endless YouTube highlight reels and advertisements—to flip their bats after whacking a no-doubt home run. It’s a practice that’s long been discouraged in American baseball and can earn a hitter a fastball in the ribs during his next plate appearance, but in Korea, flicking the lumber and jogging down the basepaths is de rigueur. Fans got an immediate taste of the flex on Tuesday, when the Dinos whacked three dingers in the opener. Their display of power picked right back up from last season, when they led the league in homers.

Many of the customs and rules have done away with the old, staid traditions of the sport; the KBO launched in 1982, giving the league a fresh start and no legacy of crotchety traditionalists to howl about changes.

“One example of a different baseball culture is when a young pitcher in the KBO hits a veteran batter, he must take off his hat and bow as a sign of remorse,” Kurtz explains. “If he does not, the benches will empty.”

In addition to a 144 game schedule, the league operates with a universal designated hitter—something for which MLB executives, players and fans have been clamoring for years now—and ends tie games after 12 innings, which avoids those bleak nights of hapless baseball that exhaust players and fans alike. There will be adjustments, concessions to the lingering threat of the COVID-19 virus; umpires and coaches will wear masks, players can’t give one another high-fives, and no one can spit on the field or in the dugout, suspending perhaps the most cherished tradition in baseball.

A handful of players born in South Korea have found success in Major League Baseball, including pitcher Chan Ho Park and outfielder Shin-Soo Choo, but only a few, including the All-Star pitcher Hyun-jin Ryu, have come to MLB after playing in the KBO. Former Major Leaguers such as 2015 KBO MVP Eric Thames have thrived in South Korea, but the adjustment for players coming the other is not unsubstantial.

“This is less of a ‘three true outcome’ league than the majors. In MLB these days, it’s a lot of home runs, walks or strikeouts, and little else in between,” says Jeeho Yoo, a reporter for the Yonhap News Agency in South Korea. “In the KBO, players put the ball in play more and there is more action and there are fewer strikeouts in general. You won’t see pitchers dominate hitters with 14, 15 strikeouts often, if at all. It’s not an indictment on pitchers, per se. It’s just that most hitters have the ability to keep fouling off pitches (even not so great hitters) and just grind out at-bats.”

Even without the big-time stats, the league is not short on talent, and as the late-night broadcasts continue, some names should begin to become familiar to devoted baseball fans in the US. Yoo lists Dinos’ outfielder Na Sung-bum, who hit one of the team’s homers on Tuesday and Kiwoom shortstop Kim Ha-seong as top players who will look to make the jump to the US within the next few years. Kim’s teammate, outfielder Lee Jung-hoo, is a young stud, a former Rookie of the Year winner and son of a KBO legend.

Outside of the quadrennial World Baseball Classic, this will be the biggest stage most of the players in KBO have ever experienced. But instead of having the attention change the game, Yoo expects KBO to use the spotlight to show off its unique brand of baseball.

“I think the league will try to let the product on the field take care of everything,” Yoo says. “If teams play some good baseball, then people will realize there is more to KBO baseball than bat flips.” 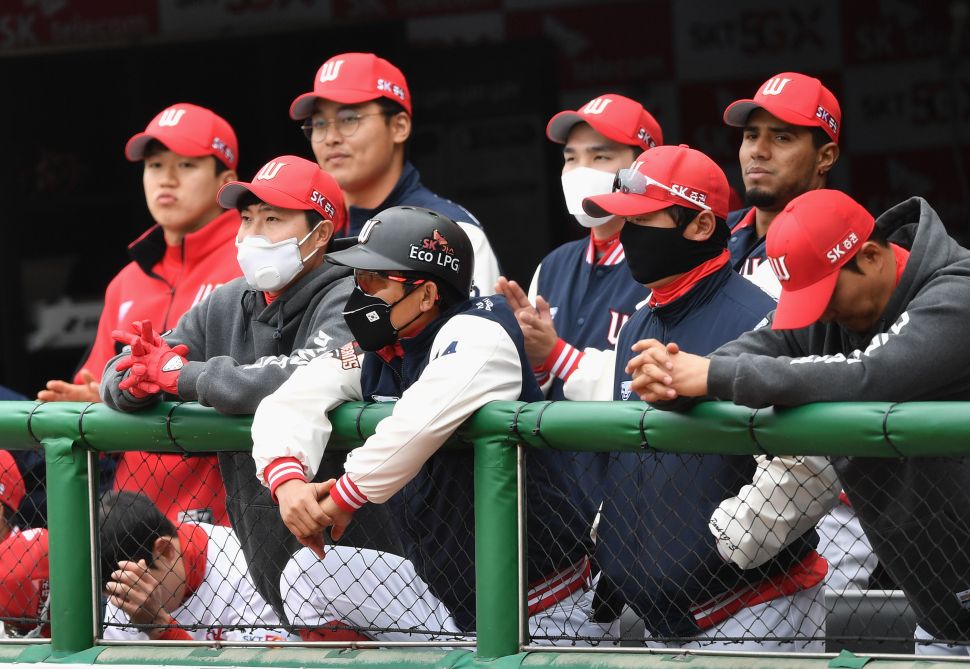