As a courier for an “essential business” in California, Jeremy Branthoover has never been busier. But the workload isn’t getting him down. In fact, his spirits are higher than ever. “I love what I do,” he told Observer. “Driving cannabis is pretty all right, not gonna lie.”

Branthoover is a cannabis courier for Caliva, a legal marijuana dispensary based in San Jose, right in the heart of Silicon Valley. The store used to be inundated with shoppers browsing for blunts, vapes and edibles. But after their customers started quarantining in their homes in March, Caliva expanded its delivery services and hit the road.

Now, equipped with his face mask and a bottle of hand sanitizer, Branthoover makes 20 deliveries a day around the San Francisco Bay area in his Volkswagen GTI, and the customers have never been happier to see him.

“I get to really make people’s day,” he said. “Seeing the look on their face when I pull up and they’re like, ‘Oh my god, I love that you guys are still open. Thank you so much.’ I think that’s one of the best things I can be doing right now, to be honest.”

This euphoria for cannabis is typically Californian. The state legalized medical marijuana in 1996, began recreational sales in 2018, and classified the drug as an essential product, alongside milk and toilet paper, this March as the pandemic took hold in America.

But despite this keenness for cannabis, buying a blunt through an app isn’t as easy as ordering a takeaway pizza just yet. Even in California, the drug comes with a lot of red tape.

“You’ve got to scan your driver’s license, and it’s got to run through a facial recognition software,” Steve Allan, Caliva’s chief financial officer, explained. “[Then] we’ve got to validate your age and we’ve got to validate the address. And we have to validate that you haven’t ordered over your daily, weekly or monthly maximum that’s allowed. So there’s just a lot in the process that creates friction upfront.”

Receiving a delivery also sidesteps the hospitality many dispensaries pride themselves on. Without a store assistant—or budtender, as they’re known—at hand, how will you know which joint is the right flavor for you?

But beggars can’t be choosers in a pandemic. And although laden with lengthy terms and conditions, online deliveries and curb-side pickups have still become a lifeline for the cannabis industry in North America.

Like Caliva, Airfield Supply Co., another dispensary in San Jose, saw survival in more marijuana deliveries. Since the pandemic began, its added six new Tesla cars to its fleet, which have helped boost its deliveries by 400 percent. The hustle of the store may have gone, but the convenience of pot parcels has been a revelation.

“This is this is the future of cannabis retail,” said Chris Lane, Airfield’s head of marketing. “Especially in Silicon Valley; that on-demand lifestyle is here.”

And it’s not just California that’s finally embraced the “toke-away.”

Since March, both Oregon and Michigan have allowed licensed retailers to conduct curb-side deliveries outside their buildings. In Utah and Washington, DC, medical dispensaries have for the first time been permitted to deliver to patients. And over the border in Canada, which legalized cannabis nationally in 2018, the Ontario government has extended an emergency order allowing stores to offer home delivery until May 19.

All this is good news for the cannabis companies that can afford their own armada of weed-laden vehicles. But for the dispensaries that have just been getting by, this pandemic could be the end of the road.

As businesses dealing with a drug that’s still federally illegal in the USA, American marijuana companies are currently ineligible for most banking services and financial aid. Even in Canada, the combined challenges of raising capital in a pandemic, competition from the illicit drug market and the looming threat of a global recession may just be enough for some weed entrepreneurs to call it a day.

“COVID-19 has impacted the liquidity challenges that new start-up businesses in the cannabis space were already facing,” said George Smitherman, president of the Cannabis Council of Canada, which represents cannabis companies large enough to be listed on Nasdaq.

“So, we have seen the cannabis space acknowledged for its essential role. There’s no doubt about that,” he told Observer. “But delivery is not a substitution for retail access. [It’s] not as good as full-service retail environments.”

Luckily for Ontario’s struggling cannabis companies, the local government has committed to issuing new cannabis store authorizations once the province’s emergency COVID-19 restrictions are lifted. Until then, the sector’s support will have to come from the one thing every business craves: new customers.

“Part of our challenge is to bring new customers on board,” Smitherman said. “And we have to do that through good quality products that are priced reasonably and are broadly accessible. That’s the formula of success.”

While the cannabis industries in both Canada and America have faced their setbacks, the hope is that, even amid a pandemic, that formula for success is more refined than ever. The average cost of legal cannabis in Canada has fallen since the market’s launched, and while retail access is limited, access from cannabis-carrying cars has never been better.

So, whether in Toronto or San Francisco, the best boon for legal weed may be the lockdown itself. Faced with months of quarantined boredom, now might be just the moment when thousands of new customers pick up the phone and dial M for marijuana. 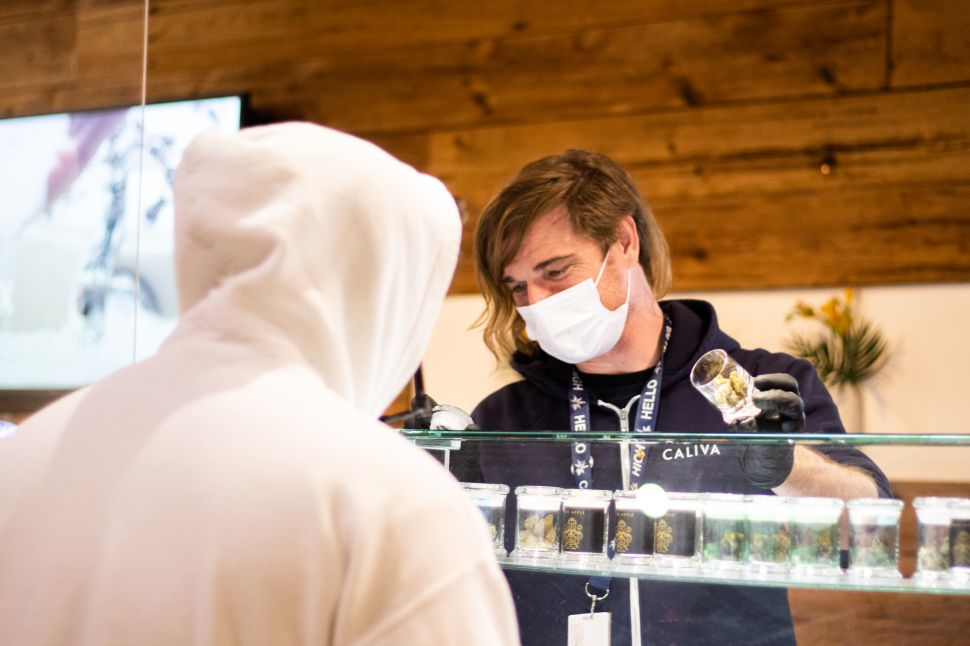