This interview contains spoilers for The Midnight Gospel.

Your herculean task after watching The Midnight Gospel on Netflix is to describe it to your friends. Here’s my attempt: it’s a (very) adult cartoon that feels like an eight-episode adaptation of the music video for “Subways” by The Avalanches, dubbing over authentically human, spiritual dialogue—and diving into questions that almost all of us will face at some point. I know my synopsis is a mouthful, but it’s a start.

The Midnight Gospel takes place in an alternate dimension called The Chromatic Ribbon, from which Clancy, the show’s fallible hero, uses his (finicky) multiverse simulator to explore different worlds before they end. Clancy interviews locals on each of those planets for his “spacecast”; they discuss psychedelics in a zombie apocalypse, the therapy of magic on a sailboat staffed by cats, bereavement in the underbelly of an evil city run by clowns and more.

But as much as the series whisks us off to distant corners of the multiverse, its dialogue comes from genuine discussions between very human, familiar people. The series is the joint offspring of Pendleton Ward, creator of Adventure Time, and Duncan Trussell, a comedian and host of the podcast The Duncan Trussell Family Hour where he interviews guests like Dr. Drew and Damien Echols about their lives and worldviews.

SEE ALSO: Your Weekend Guide to the Best Shows and Movies to Watch

In an interview with Observer, Trussell—who summarizes the show as “what would happen if you replaced the dialogue of Indiana Jones with podcast dialogue”—jumped into the philosophical depths, and proved that The Midnight Gospel’s plot maps onto the creators’ own spiritual journeys.

Trussell described how Ward first reached out to him after listening to the Family Hour podcast. “He really loved my podcast, and what he really loved about it was some of the spiritual undertones or overtones or through lines that happen with every interview,” he said. “It made him feel good, and I think he identified the way that we were talking about spirituality as being really honest. He wanted to see if there was a way to wrap the podcast up in an animated series so that other people could hear it. How do you say no to that?”

Ward and Trussell, who voices Clancy, condensed eight episodes from Trussell’s podcast to form the audio of the show. Truncating dialogue was but one challenging component of a deeply collaborative process. Trussell took ample time to praise Ward’s leadership style, which helped him grow creatively.

“[Ward] is such a pure collaborator that really trusts the process,” he said. “So I was just constantly checking inside of me to make sure that my intention behind any notes I was giving was not based on just raw confidence, but was really because I saw something or I had an idea that I loved. Pendleton taught me how to fight for those ideas. We formed a wonderful communal spiritual collaboration, which was the womb that the show grew inside of.”

At times, it feels like Midnight Gospel is a collective story about the creative team as much as it is Trussell’s real life and a psychedelic-multiverse-spacecast-journey. The final, poignant episode best illustrates how deep this crossover goes. It features Trussell’s late mother, whom he interviewed just days before she passed away. Peacefully and lucidly, she shares her thoughts on death and embraces it. Clancy’s animated body goes through an accelerated rebirth, and grows old with his mother. The pair then shapeshift into a moon and a planet, drifting toward a black hole. They end together in nothingness.

“I think Clancy had an ego death,” said Trussell. “Also, I think that in the collaborative experience, hopefully, we all had some kind of ego death. In Tibetan Buddhism, they don’t judge a work of art by how many people like it—but rather the metric is how much it transformed the artists during the creative process. To me, there’s so much common sense to that. You can hang your hat on that.”

But Midnight Gospel consciously avoids being religious, even if it’s spiritual. “What we really didn’t want to do was to preach,” he said. “We didn’t want to be corrective. We didn’t want to say, ‘Practice mindfulness and meditate and you’ll feel better!’ I know that to be true personally, but I don’t meditate every day. I’m like Clancy!”

Even so, Gospel, which means “good news,” is a very Christian term, described in the bible as a heavenly message intended to be spread. I asked Trussell for his take on the title itself. “It’s a representation of that, in the darkest, most catastrophic moments of our lives, if we just let ourselves surrender to what’s happening and fully face it right at that moment, there’s always love,” said Trussell. “There’s always something that transcends the chaotic phenomena that we find ourselves entangled in. That was my idea for the name of the show. Other people might have their own interpretations.”

And so the trippy, spacey visuals have a point, a reality that Trussell and Ward have brought to life together. The show dives into entire planets at the same time that it does individual human histories; it does so to illustrate that small, intimate losses exist on the same continuum as astrophysical, galactic ones. “As above so below: a loss is happening at every level all the way down to the individual, and probably the microorganisms in our guts, and all the way up to planets and suns,” he said. “That’s one part of what reality is to me.”

The animation also provides a way out. “We wanted there to be an option to just escape into the ridiculousness of the show, because the subject matter is going to be really challenging for some people and might make people feel really uncomfortable,” he said. “It might bring some stuff up that they weren’t quite ready to deal with.”

It’s an inescapable fact that Midnight Gospel premiered onto the screens of a traumatized world, one still reeling from a deadly pandemic, to say nothing of the daily geopolitical challenges we faced before the coronavirus. In such a world, I ask Trussell, is Midnight Gospel not a perfect religion for our time? 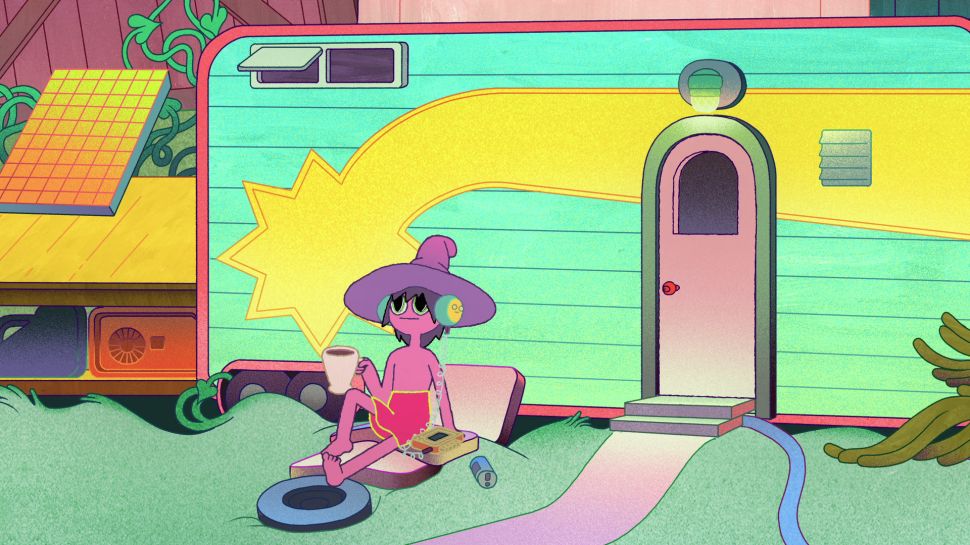