When Olivia Laing titled her new essay collection, Funny Weather: Art in an Emergency, she couldn’t have predicted the crisis her book would be born into. Instead, she was thinking about Brexit, Donald Trump’s election, environmental destruction, the rise of white nationalism and AIDS—no small affairs, but no global pandemic either. In her introduction, Laing establishes her beliefs about what art offers in the face of such upheavals: Artists provide hospitality, or the “capacity to enlarge and open” our perspectives. Their work shapes “our ethical landscapes” as it “opens us to the interior lives of others,” “makes plain inequalities,” and suggests alternate ways of living.

Given our current emergency, Laing’s thesis can make the reader wistful. She writes that one of her major, longstanding concerns is “how a person can be free, and especially in how to find freedom that is shareable, and not dependent on the oppression or exclusion of other people.” Closed borders, restricted movements, job losses and widespread fear and death are hardly ideal conditions for liberation or an enhanced sense of community. Yet Laing writes of her creative subjects in a winning, passionate voice that proves both soothing and galvanizing, especially amid a panic.

SEE ALSO: A NASA Scientist’s New Book Reveals How (And Why) We’re Searching for Life in Outer Space

“Art has been amazingly nourishing during this frightening period,” Laing recently told Observer. When lockdown began, the writer returned to Virginia Woolf’s final diary, which traces Britain’s entrance into World War II and ends just before Woolf drowns herself in the River Ouse. Laing noted how the work nevertheless “bristles with humor and curiosity, all the way to the final page.” The diary proves “how grounding and sustaining art can be.”

This attitude pervades the short artist profiles that kick off the collection, which comprises essays Laing previously published in Frieze, Bomb and The Guardian, among other outlets. She examines Jean-Michel Basquiat’s potent anti-racist statements, Georgia O’Keeffe’s unwavering commitment to developing her individual aesthetic and David Wojnarowicz’s fight for queer visibility. Laing also writes about the British polymath Derek Jarman, whose name resurfaces throughout the collection. He’s clearly one of her favorites: Laing has previously written that Modern Nature, his published journals, is her favorite book.

Where other critics might shy from such exuberant stances (there are no bad reviews in the collection), Laing isn’t interested in tepid assessments. She’s more intrigued by how art works, and “what role it plays in the artist’s life.” Laing wants to think about art’s context and what emergency it was “made to address.”

Dense theoretical reviews don’t appeal to Laing either. “I am really bored by criticism that excludes love, joy, fury,” she said. “Why settle for such a limited language? You can expand the emotional repertoire without losing intellectual acuity, I think.” Most of Laing’s subjects are popularly acclaimed figures, whose work has already been widely accepted by institutions and art history. If this creates a sense of safety among her choices, it also makes her book more accessible.

In subsequent sections, Laing’s adoration continues. After a brief section featuring Laing’s columns for Frieze magazine, four profiles—on writers Hilary Mantel and Ali Smith, and artists Sarah Lucas and Chantal Joffe—appear. The Joffe piece is particularly exciting. As Laing details her own portrait session with the painter (who’s also become an intimate friend), she examines the psychologies on both sides of the canvas. By detailing her specific experience with Joffe, Laing is able to examine universal ideas about what it means to look and be looked at. “I was caught in the act of trying to get her, as she was caught in the act of trying to get me,” Laing writes. Sure, that’s about a particular studio session, but it’s also a good assessment of the entire profile-writing enterprise.

Following essays on Queer British art and Conceptual British art, Laing gets personal again. In her newly revised 2011 essay “Feral,” she remembers the months she spent, back in the 1990s, protesting environmental degradation by living in a self-constructed home in a field. “I wanted to reflect a bit more about that phase of my life, and how I feel now with regard to the oncoming apocalypse of climate change,” Laing told Observer. “The Abandoned Person’s Tale” is a moving and disturbing account of a refugee’s eleven-year detention in the British immigration system. As part of Refugee Tales, an outreach project of Gatwick Detainees Welfare Group, the refugee shared his story with Laing, who transcribed it into this powerful account.

Through these two pieces, it becomes especially clear that Laing has responded to emergencies in ways that reach far beyond the page, and the gallery. After all, while art can be helpful in an emergency, it’s particularly potent when coupled with activism. Laing writes about Wojnarowicz’s contributions to ACT UP, the grassroots organization that raised awareness about AIDS, and Derek Jarman’s agitations for gay rights.

For such artists, self-expression has been particularly fraught, and even downright dangerous at times. “I’m drawn to a way of working—unruly, original, high-stakes, inventive…It’s the motivation, the intelligence and the commitment that draws me, not the medium,” she said.

Laing’s broad selection of subjects is political in its own way. If she embraces art of all media, certain themes prevail. By collecting a number of essays that center on queerness, anti-capitalism, feminism and ecological action, Laing sketches her own vision of today’s most interesting aesthetic projects and most urgent issues. It’s not just art we need in an emergency, but writers, like Laing, who gently guide our eyes to what’s out there. 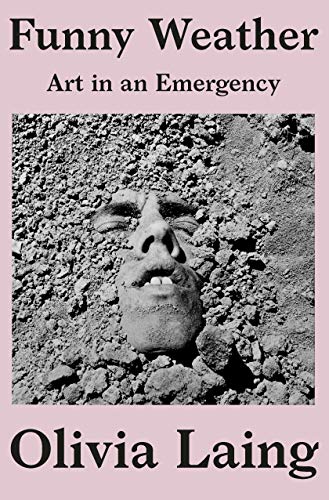