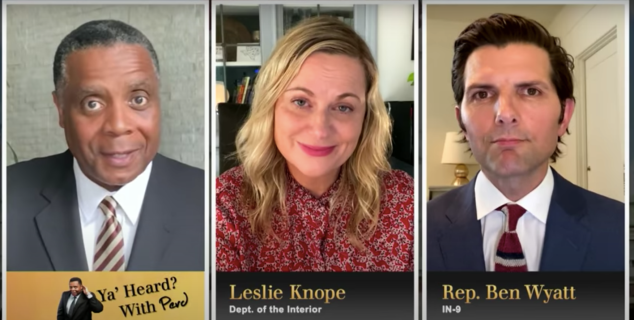 NBC’s Parks and Recreation reunion special to raise money for Feeding America was always going to flick your emotional heart switch—the nostalgia warmly embracing you like the sweatpants you just put on for the 17th straight day. But what this special does better than simply play the sitcom’s greatest hits—which it does—is provide a cultural service. We know we’re all going through this pandemic together. But Parks and Rec, in all of its stubborn earnestness, reminds us that we’re all going through this together.

If the original series, which ran from 2009-2015, was defined by its unrelenting optimism, Thursday’s special is driven by its genuine empathy. Leslie (Amy Poehler) is determined to stay connected with her friends in wake of self-isolation so the entire episode plays out via FaceTime conversation. A necessary gimmick.

Despite being written in just three days, the special cheerfully understands the slices of absurdity our lives have become in the social distancing era. It channels the absurdity of a pandemic through its lovable dorks to create a reassuring 30 minutes. Leslie’s annoyingly good-hearted “phone tree” to communicate with her friends every day; Ben’s (Adam Scott) stir-crazy mania acting up under quarantine; Gary’s (Jim O’Heir) all around Garyness. Yes, it was the characters we so love and know, but it was also us too. Everyone’s ready to escape back to reality. The episode reminds us that it’s okay to feel this way.

SEE ALSO: ‘The Last Dance’ Is Now the Top Documentary Series in the World

If you know anything about production, you know how tremendously difficult it is to deliver an episode of television. It takes incalculable levels of collaboration and creativity to do so under these circumstances. (The same goes for Saturday Night Live at Home.) That’s why this reunion special isn’t interested in lingering questions about the plot (was Ben or Leslie President in the series finale?) or #hashtag-worthy reveals (Fan Theory: Ron is somehow related to Chuck Norris.) It’s about feeling good about the world again, if only for a network hour.

The jokes were obvious yet accurate, the story more PSA than scripted fiction. It wasn’t the funniest episode ever produced. But when the context surrounding a television revival is meaningful, it can elevate the content as well. Nearly the entire world is locked down, uniting us all in a way no event quite has before. The least we can do is show some compassion to one another, which the caring gang of Pawnee citizens always do.

Sitcoms tend to lead with their guts, and Parks and Rec always wore its heart on its sleeve. Thursday’s special showed that it understands what we’re going through and it knows what we need. It’s in the details, like how Ben and Leslie’s wedding photo is visible just behind Poehler. It’s in the parade of welcome cameos from fan-favorites like Dennis Feinstein (Jason Mantzoukas) and Jean-Ralphio (Ben Schwartz). It’s in Lil’ Sebastian’s epic memorial ballad, and it’s in the show’s relentless celebration of connection. All the major elements you associate with Parks and Recreation.

Revivals are tricky. Some feel like they’re deliberately trying to elude the shadow of the original while others are too terrified to step out of it. In many cases, you’re left wondering why they brought it back in the first place. But this one-time reunion special isn’t meant to be a grand epilogue to the beloved series. There are no new resolutions needed. Instead, It’s meant to exemplify the very core of Leslie and the show itself: doing good. 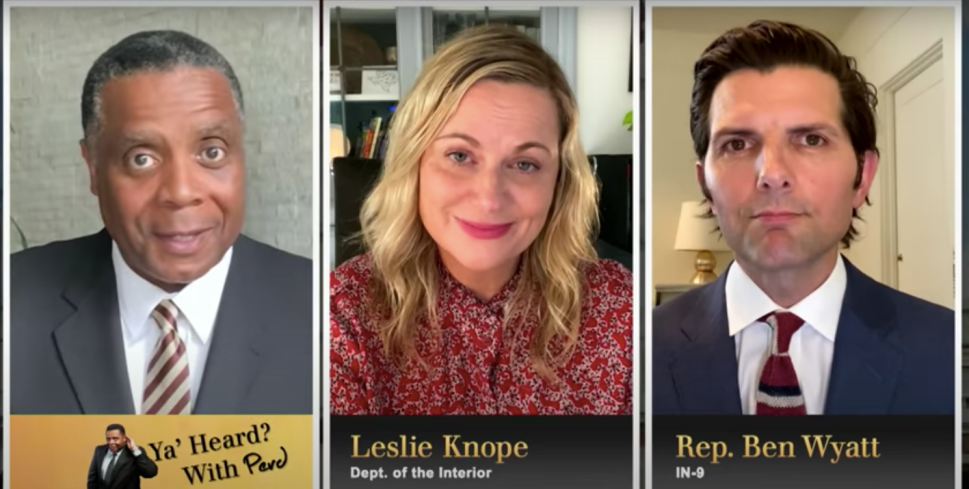