This was a difficult week for all of us, but it was a devastating one for the nation’s children.

Here in Los Angeles, the shelter-in-place order was extended at least until the beginning of August. We got word that summer camp was canceled the same day that the Hollywood Bowl, a reliable source of family entertainment for 98 years, canceled its summer season. There are few things in this world more precious and fleeting than a child’s summer, and they just had theirs taken away.

Now this week of loss and mourning is capped off with the arrival of Scoob! A full length computer animated film extension of the Scooby-Doo mythos, this comic action smorgasbord is meant to provide succor to today’s anxiously housebound kids in much the same way that the original Saturday morning cartoons did for their parents, many of whom also grew up lonely and stuck-at-home, though more out of indifference, rising divorce rates and ennui than pandemic necessity.

So does this monumentally silly movie meet this momentous occasion?

SEE ALSO: How Tony McNamara Spun History Into Story on ‘The Great’ and ‘The Favourite’

If you are able to push past the glossy, sterile stiffness of the computer animation (a bigger ask for some than for others), the answer is yes. The series’ trademark blend of character comedy and absurdist sight gags is in full display, served up with just the proper amount of postmodern self-awareness that adds to the fun rather than detracts from it. The film’s platoon of scriptwriters pile on the one-liners, and a vast majority of them land, especially when uttered by Mystery Inc. universe newcomer Will Forte, playing Shaggy, and voice acting legend Frank Welker, who portrays Scooby and has been hanging with the gang since the show launched in 1969.

Contrary to its truncated title, Scoob! is Scooby-Doo at its most maximal— a veritable spring cleaning of the Hanna-Barbera IP closet. There is Scoob and Shag, of course, whose abiding friendship gives the film some emotional resonance. They are joined as always by Fred, Velma and Daphne who — despite being contemporized by the marquee voice talents of Zac Efron, Gina Rodriguez, and Amanda Seyfried respectfully — have never felt less crucial to the proceedings.

In the film, Shaggy and Scooby are beamed up into a spaceship commandeered by Brian (Mark Wahlberg), the vainglorious heir to the Blue Falcon mantle, who insists on being introduced with the same fanfare that accompanied the Chicago Bulls during their Championship years. This pretender to the throne is joined by the original Falcon’s longtime sidekick Dynomutt (a very funny Ken Jeong) as well as original Teen Angel Dee Dee Skyes (Kiersey Clemons), who pilots the ship from a virtual motorbike.

They are in pursuit of three magical skulls that when put together can unleash the mythical three-headed monster dog, Cerberus. Also on the hunt for the skulls is the comically evil Dick Dastardly (Harry Potter alum Jason Isaacs), who is joined before it is all over by his wheezing jerk of a dog, Muttley (cartoon voice favorite Billy West).

Even Captain Caveman (Tracy Morgan) makes a seemingly compulsory appearance when the ship crash-lands on a mysterious, Pterodactyl-populated island that time forgot. In keeping with the celebrity cameo tradition of the original show (my favorites were Mama Cass and, of course, the Harlem Globetrotters), Simon Cowell shows up to convince Fred, Velma and Daphne that Scooby and Shaggy are unnecessary hangers-on.

This treasure chest of wonderful nonsense is rendered with an animation style that looks generally flat, lifeless, and utterly untouched by human hands. Companies need to understand that when we ask for “contactless” product, we are looking to apply the descriptor to our delivery pizza, not our movies. It’s a shame that the animators were unable to capture the dirty paintbrush visual appeal of the classic series. That the film is able to rise above this supreme handicap is a testament to the writers and a game voice cast.

But did it work? Did tumbling along in the daisy-paneled Mystery Machine actually take our minds off the end times? Almost, but not entirely.

One member of my three-person household couldn’t shake the absurdity of trying to focus on online school and homework demands. For another, the sight of a goofy big brown pooch brought uncomfortable memories of a dog that passed away last summer, and whose steady presence is sorely missed during this period of abject sadness.

Still, there was something quietly magical and utterly necessary about literally lol-ing at a man and a dog dressing up as short order cooks in an attempt to thwart a throng of marauding pursuers, in this case a gaggle of transforming mini-robots with chainsaws for hands. This is the kind of classic Scooby-Doo-style gag that has been inspiring uncontrollable fits of giggles in me for the entirety of my life; it is silliness that has comforted me during my darkest days, including these.

The laughter may not replace the tears, but it’s nice to at least have it as part of the mix.

Scoob! is available on digital services May 15. 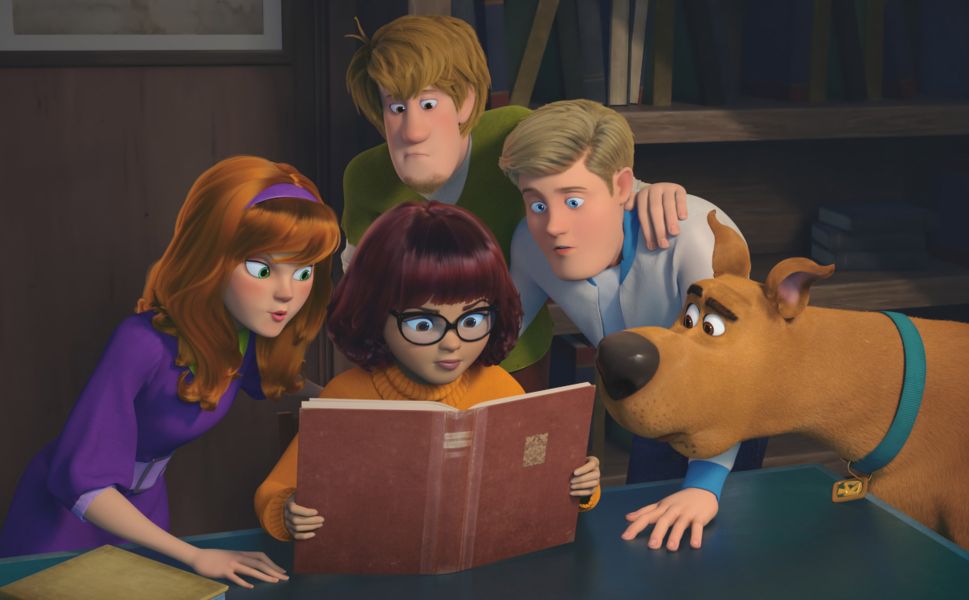