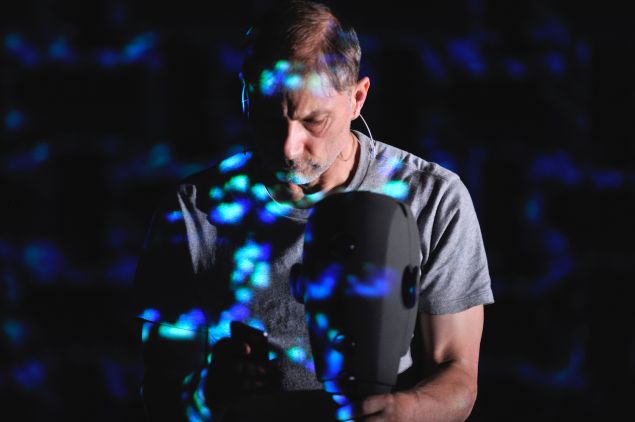 You know what Aristotle thought of Michael Bay, right? Or, more accurately, how the ancient Greek philosopher ranked visuals among the elements of theater? “Spectacle, though an attraction, is the least artistic of all the parts,” quoth he in Poetics. “The tragic effect is quite possible without a public performance and actors; and besides, the getting-up of the Spectacle is more a matter for the costumier than the poet.” Ooh, sick burn on costumes, sets and lighting!

You have to forgive ole Ari for being so anti-surface; a writer himself, he was concerned above all with language and delivery. So he might have loved the radio dramas that emerged the early 20th century, pure sonic distillations of dramatic action. And who knows what he would have made of Simon McBurney’s The Encounter? In this dazzling one-person show, the English artistic force behind the U.K. troupe Complicite functions as narrator, cast and Foley artist in telling a series of nested stories about the nature of time, consciousness, and civilization. A 2016 video capture of the show at London’s Barbican Theater Centre, The Encounter is being streamed free at St. Ann’s Warehouse’s site through Friday. If you have a decent set of noise-canceling headphones, pop them on, and don’t be afraid to go whole sections with your eyes closed. This is theater for the ear and brain.

The piece uses binaural microphones, creating 3-D sonic effects that, with headphones on, make it seem like noises are moving around behind and beside you. Turns out this technical trick is the perfect way for McBurney to get inside our heads for a trippy trip up the Amazon. He uses pre-recorded tracks, lip-synching, live looping, and aforementioned 3-D effects to create an immensely complex soundscape.

Most of the story is a solo adaptation of the 1993 book Amazon Beaming, by Petru Popescu. In this remarkable anthropological adventure, Popescu tells the story of National Geographic photojournalist Loren McIntyre, a veteran cameraman who went in search of the “uncontacted” Mayoruna South American tribespeople in 1969. Making almost immediate contact with the Mayoruna, McIntyre followed them and became lost in the Amazon rainforest. He fell under the disorienting protection of Mayoruna tribespeople, for whom time and place was in constant motion—they often destroy their ad hoc village and move on. McIntyre also forms a strong nonverbal attachment to the tribe’s headman, whom he nicknames Barnacle (from his warty skin) and with whom he believes he’s having telepathic conversations. Barnacle “beams” the message at McIntyre that the tribe is heading toward the “Beginning”—a journey to some sort of renewal of their bonds as a people. Over the course of his time with the Mayoruna, McIntyre gets dehydrated, attacked by insects, infested with maggots, and dosed on the lysergic skin of a frog. Oh, and his camera is destroyed by a monkey on the first day.

More than just a radical clash of cultures, or a romanticized view of non-technological indigenous people, The Encounter is an exploration of how the human mind operates in different environments. The typical Western mentality, McBurney suggests, is to pluck memory and facts from the great, rushing stream of consciousness, to forever create barriers between ourselves and others, constructing reality out of discrete segments. The Mayoruna, we assume, see things differently. It’s a provocative theory, one amusingly underscored when McBurney’s busy story-making is frequently interrupted by the sound of his six-year-old daughter entering the studio. She can’t sleep, and asks for snacks or a story before she’ll leave.

Again, even though you can enjoy The Encounter as pure radio drama, there is a highly choreographed stage show to watch on your laptop, and it’s a thrill to see McBurney on a stage with nothing but a table, a head-shaped binaural microphone, and some props to conjure the jungle, an airplane ride, the sounds of the village, animals in the night. Part of the fun is seeing how certain sound effects are drawn from simple objects. A large plastic bottle of is shaken to create feet sloshing through a river; a tin foil chips bag is crinkled to suggest a crackling fire; a box of unspooled VHS tape, rustled just so, becomes feet trudging through the jungle.

In these quarantined times, audio drama is the way of the present, if not the future. It’s a safe way to deliver theatrical experiences to audiences without forcing cast and crew into the same room or audiences into closed theaters. Williamstown Theatre Festival is going to release its summer season—including a revival of A Streetcar Named Desire—on audio via Audible. Washington, D.C.’s Studio Theatre just announced its largest number of commissions, greenlighting 10 audio plays. And Playwrights Horizons has jumped into the scripted podcast game with Soundstage. Give your eyes a rest from all that time online, and let your mind roam. If Aristotle had a decent set of Beats, I’m sure he’d be tuning in.